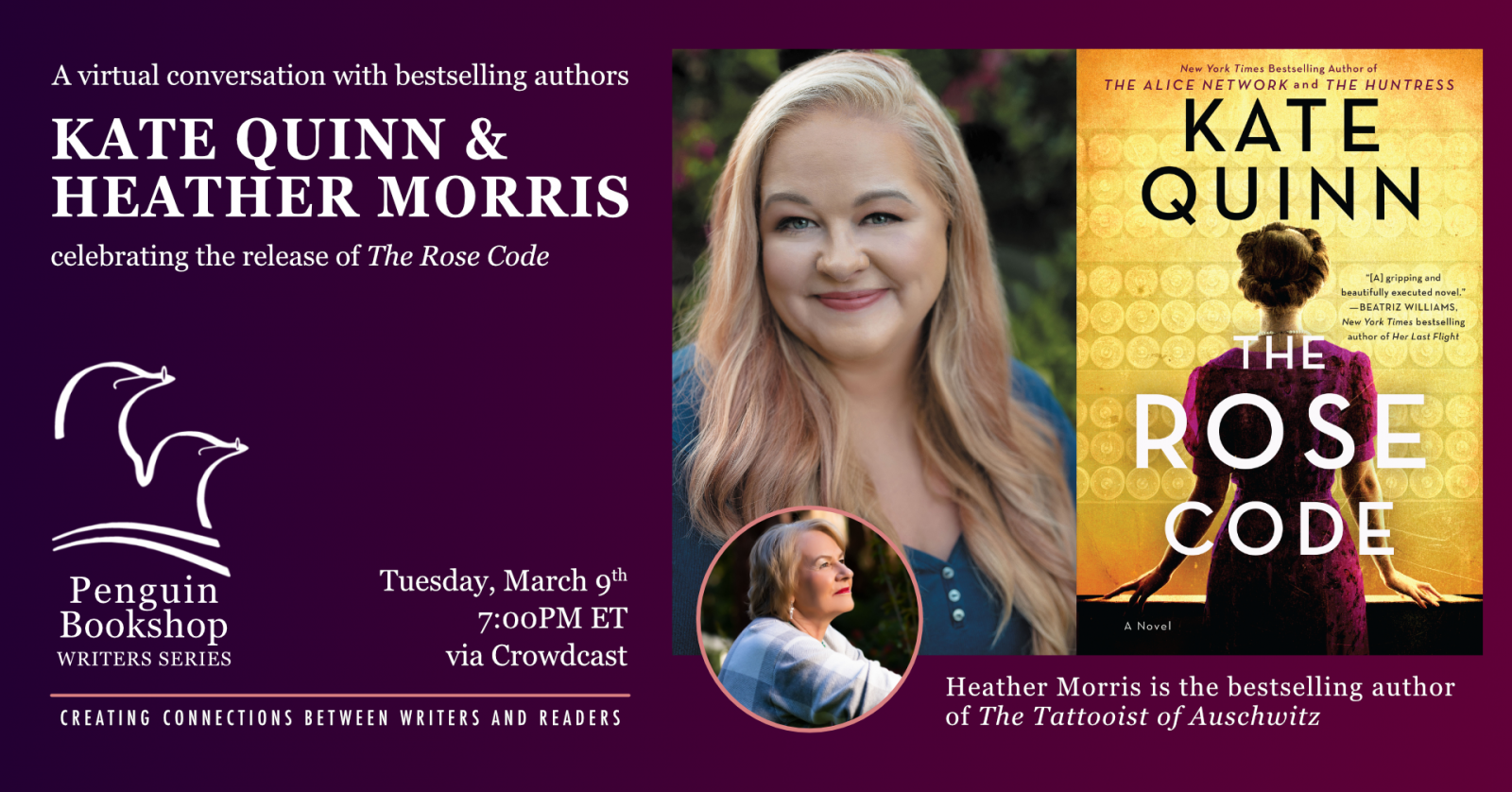 Join New York Times & USA Today bestselling author Kate Quinn and #1 New York Times bestselling author Heather Morris for a very special virtual event celebrating the release of Quinn's The Rose Code. The conversation will be moderated by Lizz Schumer of Good Housekeeping, and the authors will discuss remarkable stories of World War II.  The event will be held via Crowdcast, and will conclude with a Q&A. If you’d like to submit a question for the Q&A portion of the night, please email it to Julie.Paulauski@harpercollins.com.

This is a ticketed event, and advance registration through EVENTBRITE is required. Tickets include a copy of The Rose Code along with a signed bookplate. Tickets range $28-33.

KATE QUINN is the New York Times and USA Today bestselling author of historical fiction. A native of Southern California, she attended Boston University, where she earned bachelor’s and master’s degrees in classical voice. A lifelong history buff, she has written four novels in the Empress of Rome Saga and two books set in the Italian Renaissance before turning to the 20th century with The Alice Network, The Huntress, and The Rose Code. All have been translated into multiple languages. She and her husband now live in California with three black rescue dogs.

HEATHER MORRIS is a native of New Zealand, now resident in Australia. For several years, while working in a large public hospital in Melbourne, she studied and wrote screenplays, one of which was optioned by an Academy Award-winning screenwriter in the US. In 2003, Heather was introduced to an elderly gentleman who ‘might just have a story worth telling’. The day she met Lale Sokolov changed both their lives. Their friendship grew and Lale embarked on a journey of self-scrutiny, entrusting the innermost details of his life during the Holocaust to her. Heather originally wrote Lale’s story as a screenplay – which ranked high in international competitions – before reshaping it into her debut novel, The Tattooist of Auschwitz.

ABOUT THE ROSE CODE

As England prepares to fight the Nazis, three very different women answer the call to mysterious country estate Bletchley Park, where the best minds in Britain train to break German military codes. Vivacious debutante Osla is the girl who has everything—beauty, wealth, and the dashing Prince Philip of Greece sending her roses—but she burns to prove herself as more than a society girl, and puts her fluent German to use as a translator of decoded enemy secrets. Imperious self-made Mab, product of east-end London poverty, works the legendary codebreaking machines as she conceals old wounds and looks for a socially advantageous husband. Both Osla and Mab are quick to see the potential in local village spinster Beth, whose shyness conceals a brilliant facility with puzzles, and soon Beth spreads her wings as one of the Park’s few female cryptanalysts. But war, loss, and the impossible pressure of secrecy will tear the three apart.

1947. As the royal wedding of Princess Elizabeth and Prince Philip whips post-war Britain into a fever, three friends-turned-enemies are reunited by a mysterious encrypted letter--the key to which lies buried in the long-ago betrayal that destroyed their friendship and left one of them confined to an asylum. A mysterious traitor has emerged from the shadows of their Bletchley Park past, and now Osla, Mab, and Beth must resurrect their old alliance and crack one last code together. But each petal they remove from the rose code brings danger--and their true enemy--closer...

Kate attracts legions of readers by promising them immersive, complex, and emotionally nuanced tales that, while told through a historical lens, speak to very present-day moments. Publishing in time to kick off Women’s History Month, THE ROSE CODE continues that tradition by exploring, among other themes, the ideas of equality in the workplace, female autonomy, the complexity of female friendship—both at its highest peaks and abject lows—plus the mental and emotional tolls the unrelenting secrecy of Bletchley created. In current times where women are continuing to bravely share their truths and speak out on multitudes of injustices, Kate harkens back to the eerily similar hurdles historical times pressed upon women and illustrates just how far…and how much further…in creating an equitable society we have to go. For what is history but HERstory as well?

ADVANCE PRAISE FOR THE ROSE CODE

“[An] this immersive saga. [Her] page-turning narrative does not disappoint.” —PUBLISHERS WEEKLY, starred review

“By turns heartbreaking, fascinating, and mysterious, Quinn’s latest historical novel is likely to turn up on 2021 best lists.”—BOOKLIST, starred review

“The hidden history of Bletchley Park has been waiting for a master storyteller like Kate Quinn to bring it to life. [A] gripping and beautifully executed novel.” —BEATRIZ WILLIAMS, New York Times bestselling author of Her Last Flight

“Prepare to be swept away by The Rose Code. A richly deserved tribute to the WWII codebreakers of Bletchley Park, Kate Quinn’s latest novel is a tour de force. I absolutely loved it." —KRISTINA MCMORRIS, New York Times bestselling author of Sold on a Monday

“A knockout of a story, written by the reigning queen of historical fiction. A book for the ages.” —FIONA DAVIS, New York Times bestselling author of The Lions of Fifth Avenue

“This rollicking tale of espionage and female solidarity is a tour de force that will make you laugh and cry at the same time. The Rose Code is pure genius and Quinn's best... so far.” —STEPHANIE DRAY, New York Times Bestselling author of The Women of Chateau Lafayette

“The Rose Code is a firecracker of a novel! Clear out your calendar, because once you start reading this one, you won’t put it down.”—ELISE HOOPER, author of Fast Girls

"The Rose Code is everything you love about an unputdownable novel and more. Utterly satisfying." —SUSAN MEISSNER, bestselling author of The Nature of Fragile Things

The Rose Code: A Novel (Paperback)

The Tattooist of Auschwitz: A Novel (Paperback)

The Alice Network: A Novel (Paperback)

The Huntress: A Novel (Paperback)