In the Shadow of the Mic: Three Decades of Slam Poetry in Pittsburgh 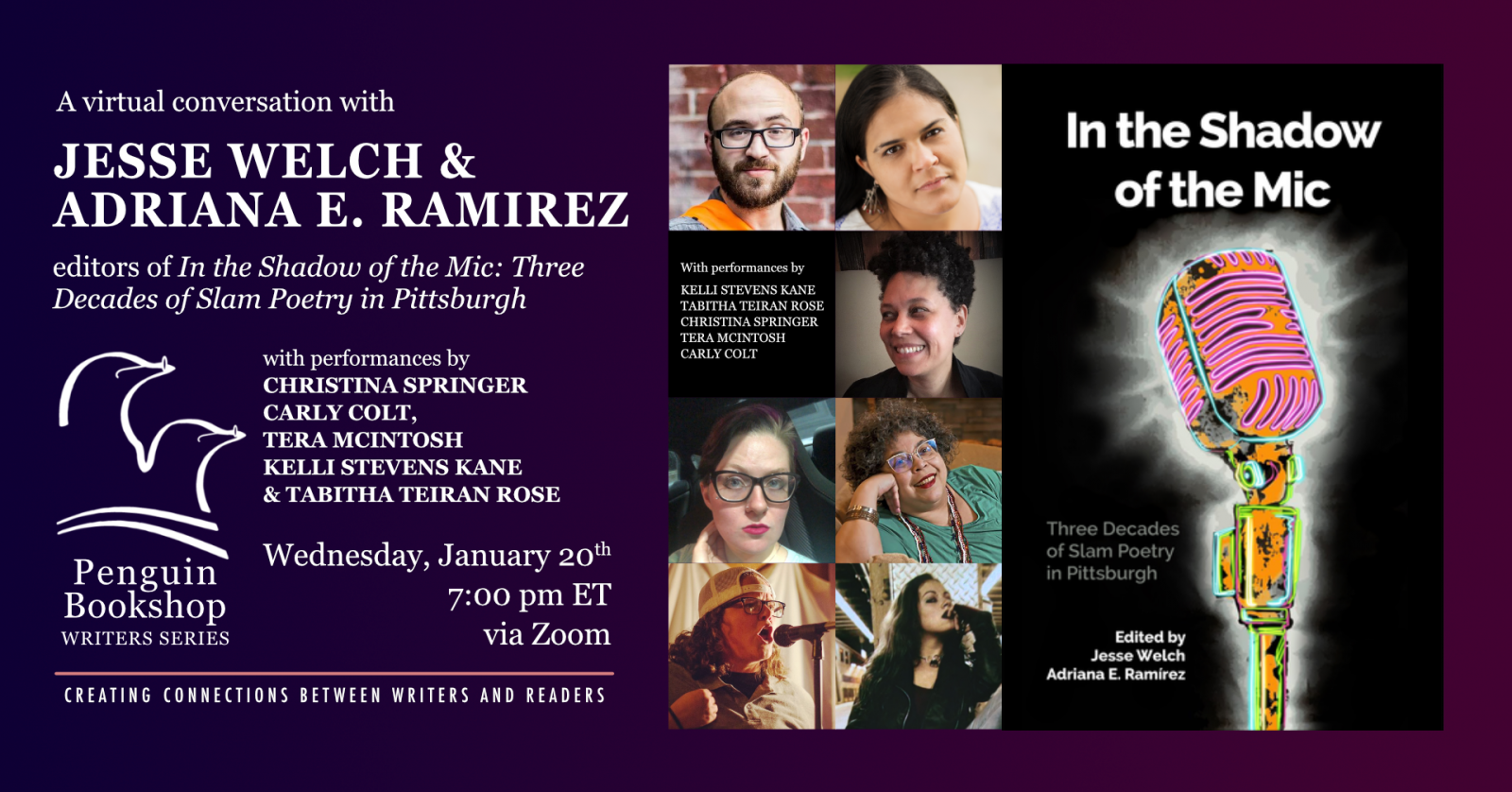 featuring performances by some of our best spoken word artists!

“There is beauty in the authenticity and rawness. I also am reading them with an understanding that these are meant to be performed. So it’s like reading a script in a way. Something not really meant to be digested like this. But that gives it an interesting twist to consider.” —Baron Batch

In the Shadow of the Mic: Three Decades of Slam Poetry in Pittsburgh celebrates the history, culture, and community of the Steel City Slam, from its founding in the early ’90s to present day. In this collection, editors Jesse Welch and PEN America Literary Award–winning writer Adriana E. Ramírez present twenty-nine poems from thirty spoken word artists, including Stacey Waite, Davon Clark, and Leslie Ezra Smith, who are representative of the life and breadth of three decades of competitive slam poetry in Pittsburgh. Each poem is a deep dive into the individual, the collective, the city, and the spirit of the slam. Interviews with founder Christina Springer, Slammaster D.J. Brewer, and the Shadow Lounge owner Justin Strong tell the origin of Pittsburgh’s slam poetry movement, the highs and lows in the slam’s storied past, and their unique roles in creating a space for budding and established spoken word artists. Every city has its own style, and Pittsburgh's, simultaneously blue collar and deeply academic, is uniquely ours.

Join us as we hear Jesse Welch & Adriana discuss Shadow of the Mic. Contributers Christina Springer, Carly Colt, Tera McIntosh, Kelli Stevens Kane, and Tabitha Teiran Rose will also give readings of their work from the book. This event will be held on Zoom and is free to the public. It will last approximately an hour and will conclude with a Q&A from the audience. Advance registration is required.

NOTE TO ATTENDEES: Most of our events do not require the purchase of a ticket or a book for entry. When you attend these "free" events, we kindly ask that you strongly consider purchasing one of the featured books. Your book purchase helps to sustain and ensure the future of the Penguin Bookshop, the philanthropies it supports, author events, and the quality of life for the authors; authors whose artistry, truth-telling, and entertainment we rely upon. Thank you.

JESSE WELCH is a poet, father, and untalented juggler. He is the co-founder and host of the Nasty Slam, Pittsburgh’s head-to-head deathmatch slam. He has competed at the National Poetry Slam for Chicago, Seattle, and Pittsburgh. He has been performing his poetry since he was twelve years old and appears in the award-winning documentary Louder Than A Bomb.

ADRIANA E. RAMIREZ is an award-winning nonfiction writer and poet. She founded Pittsburgh’s infamous Nasty Slam, co-founded the Pittsburgh Poetry Collective, and was the Slammaster for the Steel City Slam from 2006 to 2016. Her work has appeared in the Los Angeles Times, ESPN’s The Undefeated, Literary Hub, and Guernica. She won the PEN/Fusion Emerging Writers Prize in 2015 for her nonfiction novella Dead Boys (2016, Little A). Her first full-length work of nonfiction, The Violence, is forthcoming from Scribner.

In the Shadow of the Mic: Three Decades of Slam Poetry in Pittsburgh