Penguin Bookshop Writers Series: A Conversation with Megha Majumdar author of the bestselling A BURNING 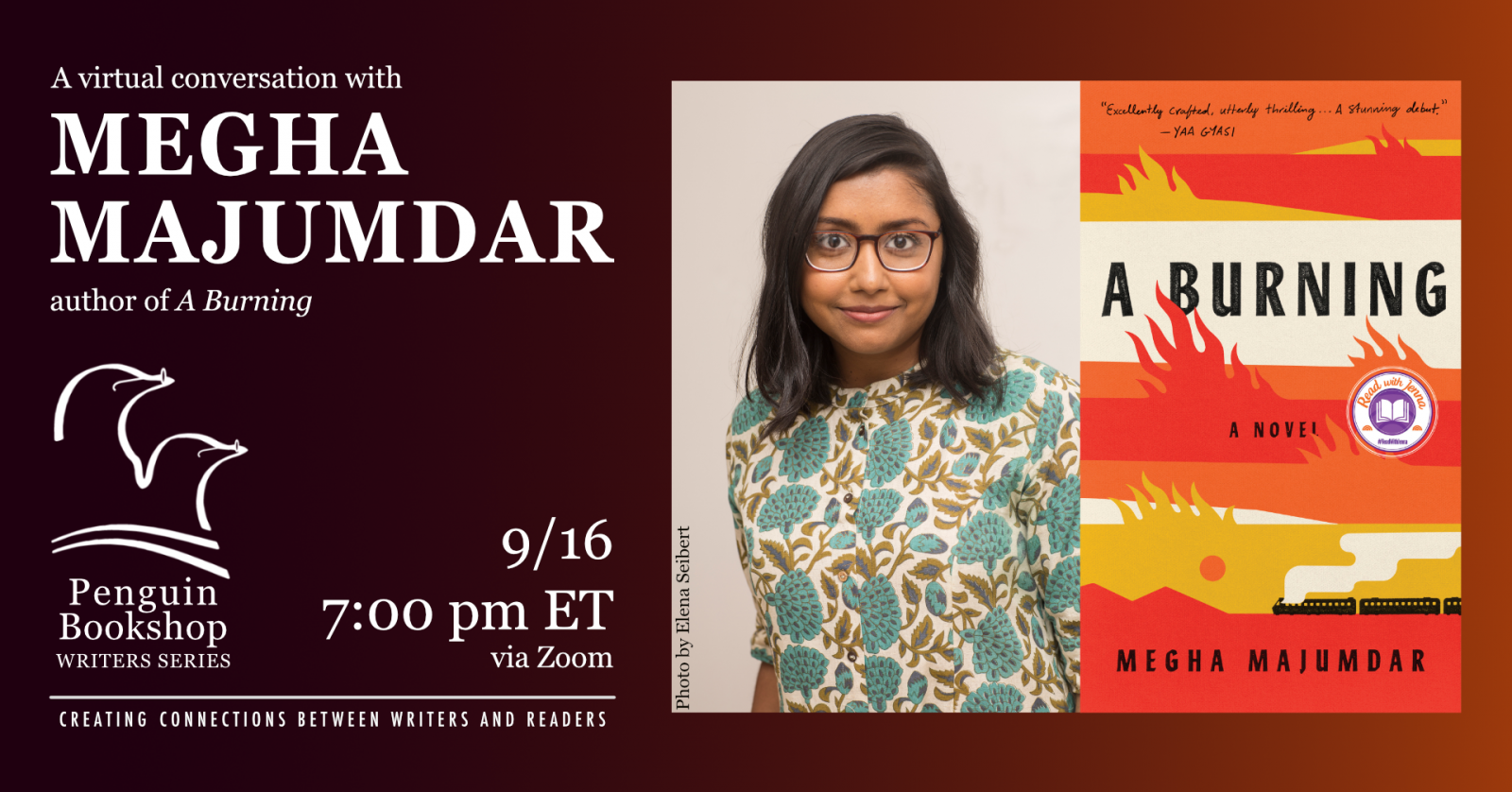 A Virtual Conversation with Megha Majumdar about her book A Burning

The Penguin Bookshop Writers Series is returning this fall! To kick off its return, we will be joined by Megha Majumdar, editor at Catapult and debut author of A Burning, which debuted on The New York Times bestseller list in June.  Megha will give a brief reading, and will then be joined by Penguin Bookshop owner Susan Hans O'Connor for a conversation about Megha's experience with the writing process, her inspiration for A Burning, and her work as an editor.  The evening will conclude with a Q&A from the audience.  Order  A BURNING through the Penguin Bookshop and receive a bookplate signed by the author!

This event will be held virtually via ZOOM.

GET A COPY OF A BURNING WITH A SIGNED BOOKPLATE!
Apply the promo code MEGHA when checking out with a copy of A Burning and a signed bookplate will be included in your purchase! These orders will be shipped after the event, in mid-September.

REGISTER FOR THIS EVENT

MEGHA MAJUMDAR was born and raised in Kolkata, India. She moved to the United States to attend college at Harvard University, where she was a Traub Scholar, followed by graduate school in social anthropology at Johns Hopkins University. She works as an associate editor at Catapult, and lives in New York City. A Burning is her first book. Follow her on Twitter @MeghaMaj and Instagram @megha.maj.

PRAISE FOR A BURNING

“Riveting…This is a novel of our pandemic times, an exploration of precarity in all its forms…Majumdar excels at depicting the workings of power on the powerless… Fate has rarely been so many-faced, so muscular, so mercurial, or so mesmerizing as it is in A Burning.”
—The New York Times Book Review

“Immersive…masterly… the elements of a thriller are transmuted into prismatic portraiture… A Burning has a similar urgency of appeal [to Faulkner’s As I Lay Dying.] Its characters are at the very front of the stage, and we can feel their breath… Her spare plot moves with arrowlike determination…I can’t remember when I last read a novel that so quickly dismantled the ordinary skepticism that attends the reading of made-up stories. Early Naipaul comes to mind as a precursor, and perhaps Akhil Sharma’s stupendously vivid novel “Family Life.”… It’s only at the end of this brief, brave novel that one becomes fully aware of how broad its judgments have been, how fierce and absolute its condemnations. Through the gaps that open up among and behind these three characters, a large Indian panoply emerges.”
—James Wood, The New Yorker

“This is a novel of now: a beautifully constructed literary thriller from a rare and powerful new voice.”
—Colum McCann

A Burning: A novel (Hardcover)