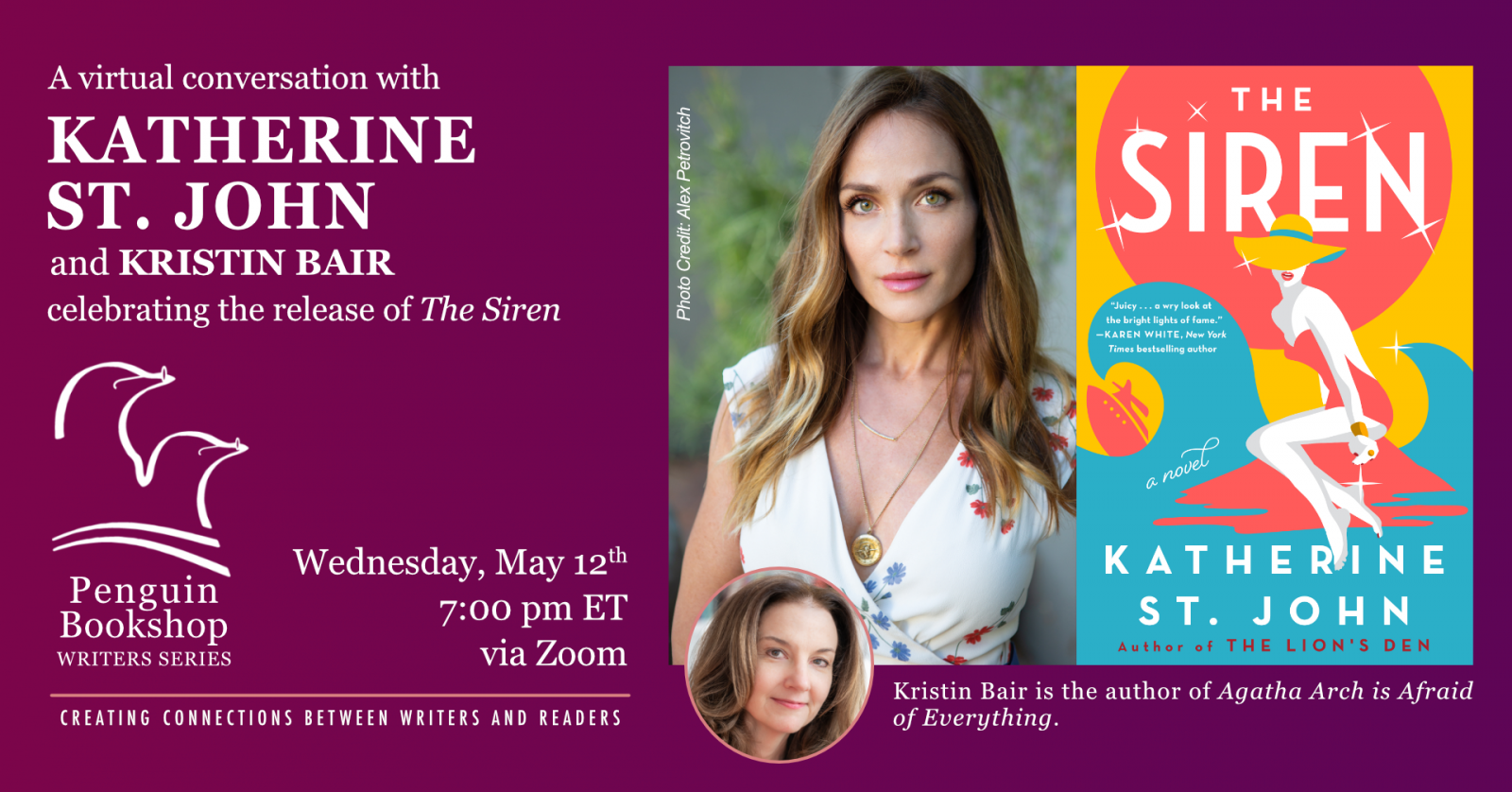 An Evening with Katherine St. John & Kristin Bair
Celebrating the Release of The Siren

The Penguin Bookshop Writers Series will host author Katherine St. John to celebrate the release of her second novel, The Siren! Katherine will be joined in conversation by fellow author Kristin Bair to dive into the world she's created in The Siren, as well as discuss her writing process. The conversation should last approximately one hour, and will conclude with a Q&A from the audience. This event will be held virtually via Zoom, and advance registration is required.

We are excited to offer a special promotion for The Siren! When you register for this event, you will receive a 20% off discount code that can be applied towards the pre-order purchase of The Siren. The code will be emailed to you along with your Zoom confirmation email. This offer expires on May 12th.

Katherine St. John is a native of Mississippi, graduate of the University of Southern California, and author of the critically acclaimed novel The Lion's Den. When she’s not writing, she can be found hiking or on the beach with a good book. Katherine currently lives in Los Angeles with her husband and children. Her new book, The Siren, will be published in May 2021.

Kristin Bair is the author of the novel Agatha Arch Is Afraid of Everything. Under the name Kristin Bair O’Keeffe, she has published two novels, The Art of Floating and Thirsty, as well as numerous essays about China, bears, adoption, off-the-plot expats, and more. Her work has appeared in The Gettysburg Review, The Baltimore Review, The Manifest-Station, Flying: Journal of Writing and Environment, The Christian Science Monitor, Poets & Writers Magazine, Writer’s Digest, and other publications.

Kristin has an MFA from Columbia College Chicago and a BA in English and journalism from Indiana University, Bloomington. As a speaker and writing instructor, her peripatetic nature has landed her in classrooms and conferences around the globe, from Chicago to Boston to Shanghai, China, and many places in between. A native Pittsburgher, Kristin now lives north of Boston with her husband and two kiddos. Follow her on Twitter and Instagram: @kbairokeeffe.

Amid a sizzling-hot summer, Hollywood’s most notorious faces assemble on the idyllic Caribbean island of St. Genesius to film The Siren, starring dangerously handsome megastar Cole Power playing opposite his ex-wife, Stella Rivers. The surefire blockbuster promises to entice audiences with its sultry storyline and intimately connected cast.

Three very different women arrive on set, each with her own motive. Stella, an infamously unstable actress, is struggling to reclaim the career she lost in the wake of multiple, very public breakdowns. Taylor, a fledgling producer, is anxious to work on a film she hopes will turn her career around after her last job ended in scandal. And Felicity, Stella’s mysterious new assistant, harbors designs of her own that threaten to upend everyone’s plans.

With a hurricane brewing offshore, each woman finds herself trapped on the island, united against a common enemy. But as deceptions come to light, misplaced trust may prove more perilous than the storm itself.

ADVANCE PRAISE FOR THE SIREN

“The Siren by Katherine St. John is more than a juicy insight into Hollywood and its enigmatic stars; it’s a wry look at the bright lights of fame that can both illuminate and incinerate. The exotic Caribbean setting and conflicted characters coupled with an edge-of-your-seat stormy climax makes this a book you will struggle to put down.” —Karen White, New York Times bestselling author of The Last Night in London

“A deliciously tantalizing read that immediately sucks you in. When people call something a page turner, this is what they mean! I couldn’t put The Siren down and I didn’t want to give it up when it was over.” —Abby Jimenez, USA Today bestselling author of Life's Too Short

Agatha Arch is Afraid of Everything: A Novel (Paperback)