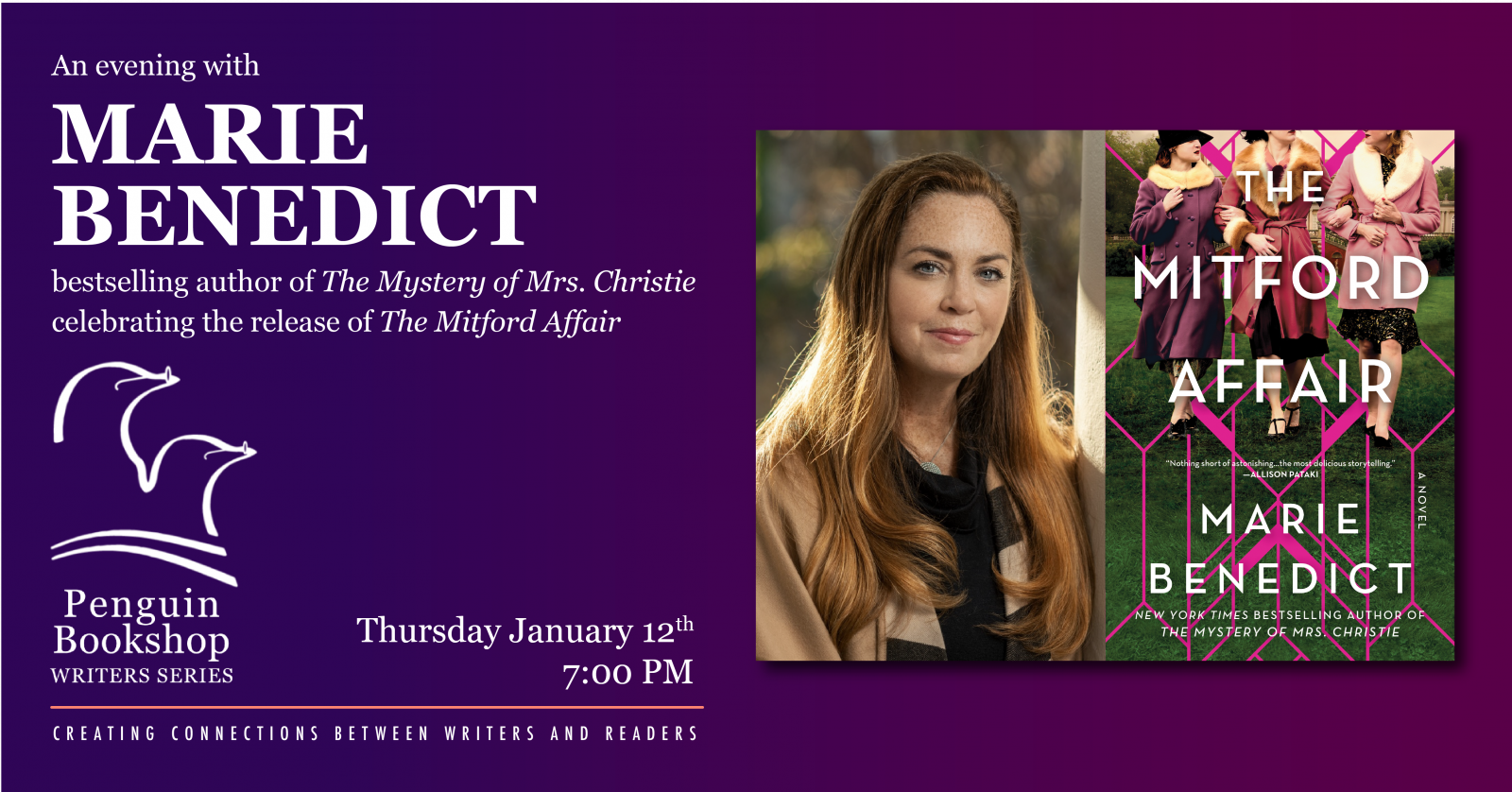 "Plunges readers into a world of glamorous, charismatic young British debutantes and then turns that shiny world on its head...the most delicious storytelling." —Allison Pataki, New York Times bestselling author of The Magnificent Lives of Marjorie Post

We are thrilled to welcome back Marie Benedict to the Penguin Bookshop Writers Series as we celebrate the launch of her newest novel, The Mitford Affair! Marie will be giving us an inside look at the research and creative process for writing The Mitford Affair. She will also answer questions from the audience, and sign copies of the book, too!

ABOUT THE MITFORD AFFAIR

Between the World Wars, the six Mitford sisters—each more beautiful, brilliant, and eccentric than the next—dominate the English political, literary, and social scenes. Though they've weathered scandals before, the family falls into disarray when Diana divorces her wealthy husband to marry a fascist leader and Unity follows her sister's lead all the way to Munich, inciting rumors that she's become Hitler's mistress.

As the Nazis rise in power, novelist Nancy Mitford grows suspicious of her sisters' constant visits to Germany and the high-ranking fascist company they keep. When she overhears alarming conversations and uncovers disquieting documents, Nancy must make excruciating choices as Great Britain goes to war with Germany.

Probing the torrid political climate in the lead-up to World War II and the ways that seemingly sensible people can be sucked into radical action, The Mitford Affair follows Nancy's valiant efforts to stop the Nazis from taking over Great Britain, and the complicated choices she must make between the personal and the political

ADVANCE PRAISE FOR THE MITFORD AFFAIR

"Timely and suspenseful, The Mitford Affair is an immersive, spellbinding novel that illuminates the terrible allure fascism holds for some, as well as the courage and moral clarity that enable others to resist even when beloved friends and family succumb." — Jennifer Chiaverini, New York Times bestselling author of Resistance Women

"In her latest book The Mitford Affair, Benedict plunges readers into a world of glamorous, charismatic young British debutantes and then turns that shiny world on its head. I was blown away--learning this true story of the Mitford sisters and the roles they played for and against the Nazis was nothing short of astonishing. Benedict delivers with all that readers have come to love and expect from her: nuance, elan, and the most delicious storytelling." — Allison Pataki, New York Times bestselling author of The Magnificent Lives of Marjorie Post

"Benedict unflinchingly peels away the giddy facade, revealing the tragedy beneath the one-liners in this close look at the Mitfords' darkest hour: the family's embrace of fascism and flirtation with treason in the face of World War II." — Lauren Willig, New York Times bestselling author

The Mitford Affair: A Novel (Hardcover)