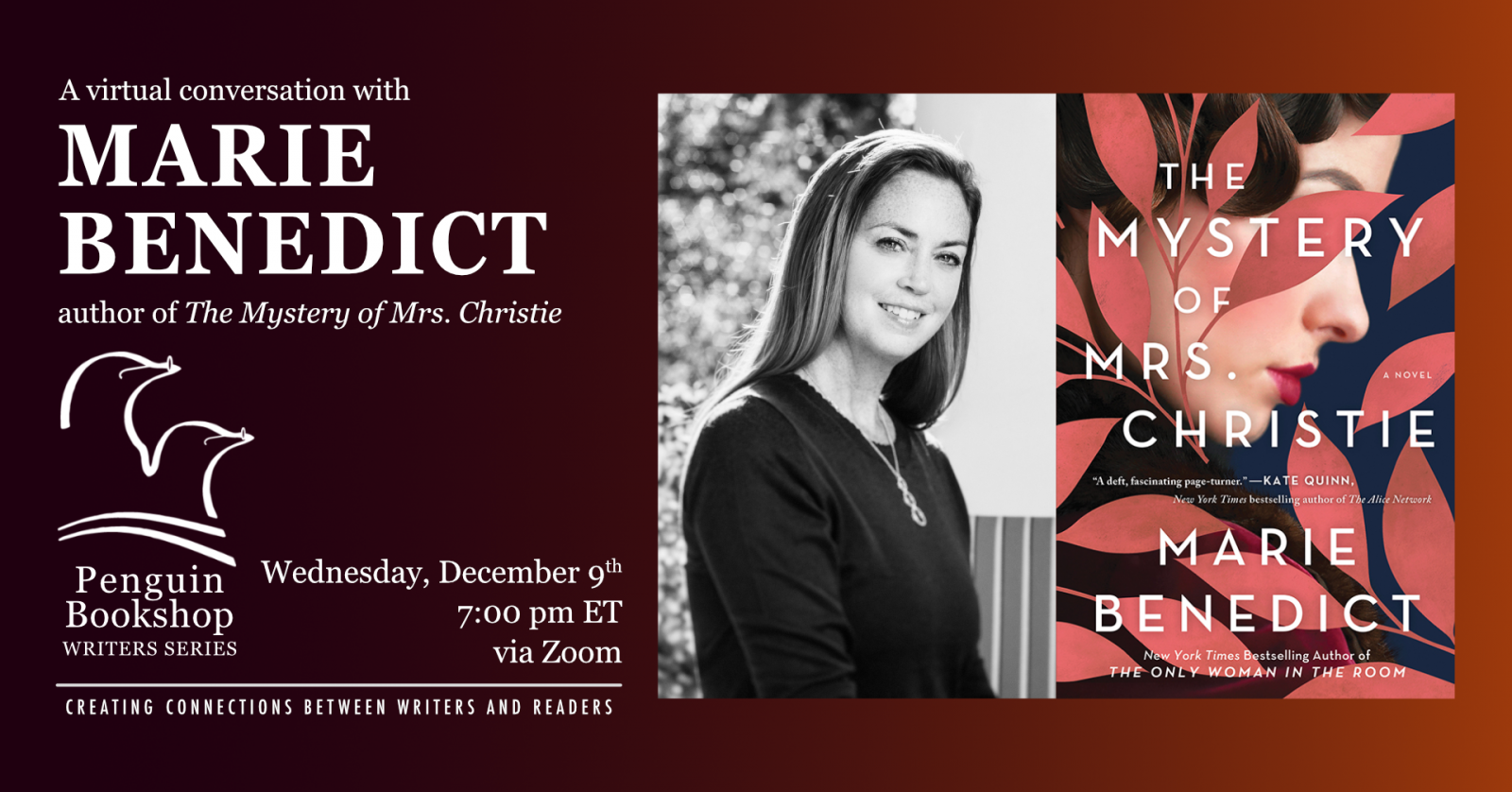 Join us as we celebrate the upcoming release of

THE MYSTERY OF MRS. CHRISTIE

The Penguin Bookshop Writers Series will host Marie Benedict to celebrate the upcoming release of her fourth novel, The Mystery of Mrs. Christie.  As this is a pre-publication event, we'll be getting an inside scoop from Marie about the book before it is released on December 29th.  Tickets for this event include a signed copy of the book, which will be available to attendees on its publication day, either via in-store pick-up or mail. This event will be held virtually via ZOOM, and should last approximately one hour. We will conclude with a Q&A from the audience.

Please note that registration for this event has closed.

Marie Benedict is a lawyer with more than ten years' experience as a litigator at two of the country's premier law firms, who found her calling unearthing the hidden historical stories of women. Her mission is to excavate from the past the most important, complex and fascinating women of history and bring them into the light of present-day where we can finally perceive the breadth of their contributions as well as the insights they bring to modern day issues. She embarked on a new, thematically connected series of historical novels with THE OTHER EINSTEIN, which tells the tale of Albert Einstein's first wife, a physicist herself, and the role she might have played in his theories. The next novel in this series is the USA Today bestselling CARNEGIE'S MAID -- which released in January of 2018 -- and the book that followed is the New York Times bestseller and Barnes & Noble Book Club Pick THE ONLY WOMAN IN THE ROOM, the story of the brilliant inventor Hedy Lamarr, which published in January of 2019. In January of 2020, LADY CLEMENTINE, the story of the incredible Clementine Churchill, was released, and became an international bestseller. Her next novel, THE MYSTERY OF MRS. CHRISTIE, will be published in January of 2021, and her first co-written book, THE PERSONAL LIBRARIAN, with the talented Victoria Christopher Murray, will be released in June of 2021. Writing as Heather Terrell, Marie also published the historical novels The Chrysalis, The Map Thief, and Brigid of Kildare.

ABOUT THE MYSTERY OF MRS. CHRISTIE

In December 1926, Agatha Christie goes missing. Investigators find her empty car on the edge of a deep, gloomy lake, the only clues some tire tracks nearby and a fur coat left in the car―strange for a frigid night. Her husband and daughter have no knowledge of her whereabouts, and England unleashes an unprecedented manhunt to find the up-and-coming mystery author. Eleven days later, she reappears, just as mysteriously as she disappeared, claiming amnesia and providing no explanations for her time away.

The puzzle of those missing eleven days has persisted. With her trademark exploration into the shadows of history, acclaimed author Marie Benedict brings us into the world of Agatha Christie, imagining why such a brilliant woman would find herself at the center of such a murky story.

​What is real, and what is mystery? What role did her unfaithful husband play, and what was he not telling investigators? A master storyteller whose clever mind may never be matched, Agatha Christie's untold history offers perhaps her greatest mystery of all.