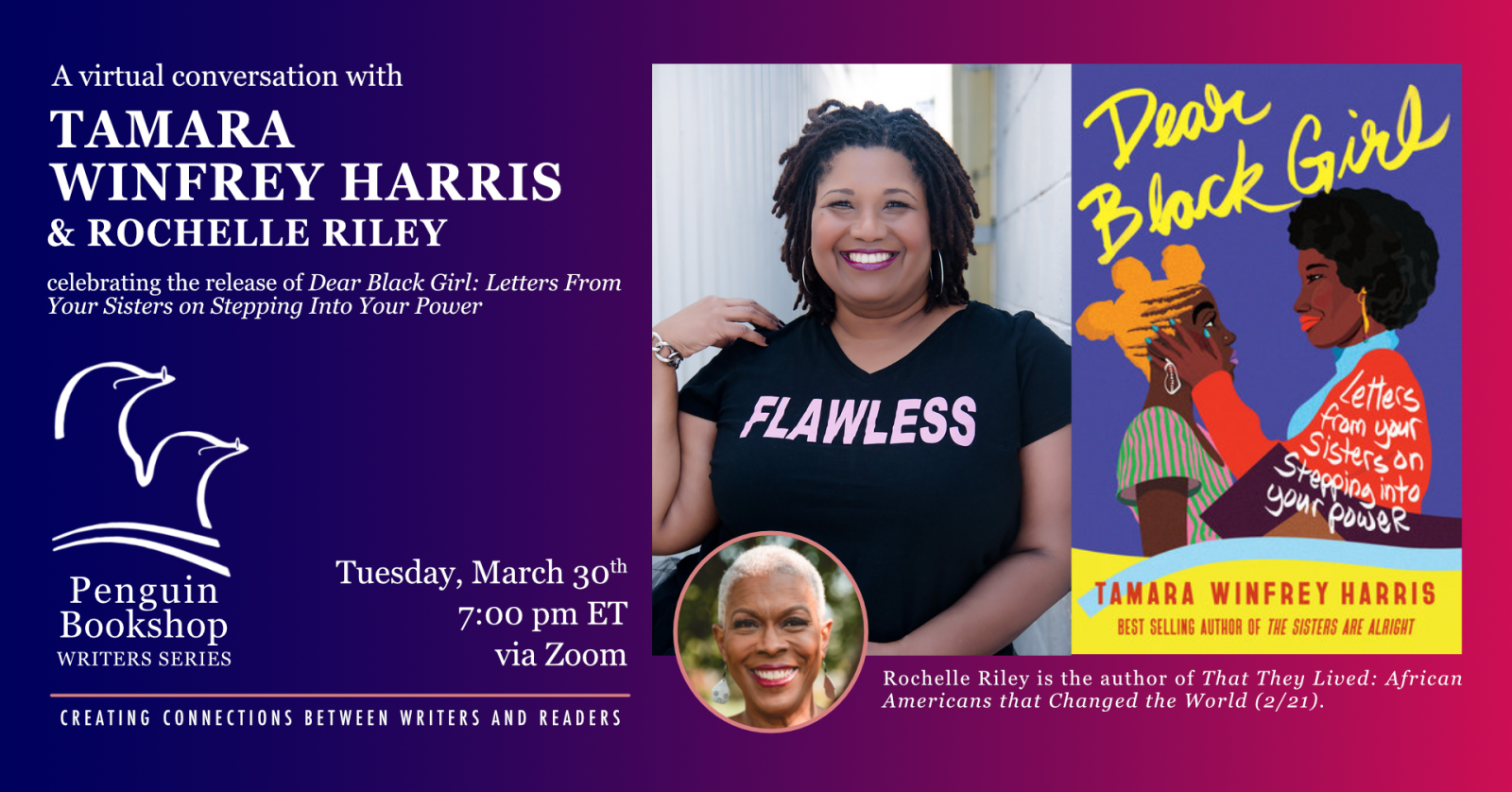 In Dear Black Girl, Winfrey-Harris introduces and organizes a selection of these letters, modeling how Black women can nurture future generations. Each chapter ends with a prompt encouraging girls to write a letter to themselves, teaching the art of self-love and self-nurturing.

The Penguin Bookshop Writers Series will host author Tamara Winfrey Harris to celebrate the release of her latest book Dear Black Girl: Letters From Your Sisters on Stepping Into Your Power. Tamara will be joined in conversation by Rochelle Riley, author of the forthcoming book That They Lived: African Americans that Changed the World (February 2021). The conversation should last approximately one hour, and will conclude with a Q&A from the audience.  This event will be hosted virtually via ZOOM. Advance registration is required.

NOTE TO ATTENDEES: Most of our events do not require the purchase of a ticket or a book for entry. When you attend these "free" events, we kindly ask that you strongly consider purchasing one of the featured books. Your book purchase helps to sustain and ensure the future of the Penguin Bookshop, the philanthropies it supports, author events, and the quality of life for the authors; authors whose artistry, truth-telling, and entertainment we rely upon. Thank you.

Tamara Winfrey-Harris is a writer who specializes in the ever-evolving space where current events, politics and pop culture intersect with race and gender. She says, “I want to tell the stories of Black women and girls, and deliver the truth to all those folks who got us twisted—tangled up in racist and sexist lies. I want my writing to advocate for my sisters. We are better than alright. We are amazing.”

Well-versed on a range of topics, including Beyoncé’s feminism; Rachel Dolezal’s white privilege; and the Black church and female sexuality, Tamara has been published in media outlets, including The New York Times, The Atlantic, Cosmopolitan, New York Magazine and The Los Angeles Times. And she has been called to share her analysis on media outlets, including NPR’s “Weekend Edition” and Janet Mock’s “So Popular” on MSNBC.com, and on university campuses nationwide.

Tamara’s first book, The Sisters Are Alright: Changing the Broken Narrative of Black Women in America was published by Berrett-Koehler Publishers in 2015 and called “a myth-busting portrait of Black women in America” by The Washington Post. The book won the Phillis Wheatley Award, IndieFab Award, Independent Publishers Living Now Award and the IPPY Award. Her sophomore effort Dear Black Girl: Letters From Your Sisters On Stepping Into Your Power is forthcoming in March 2021 from Berrett-Koehler Publishers, and available for pre-order.

In 2020, Tamara completed yoga teacher training and is certified RYT 200 through the Yoga Alliance. She says, “Yoga is not exercise; it is healing and liberation and beauty. I want to share that with people who are chronically disregarded and oppressed, wherever they are–at home, at school, in community centers. I especially want to do yoga with my sisters, because they deserve this peace.”

Rochelle Riley is Director of Arts and Culture for the city of Detroit. The author, essayist, and arts advocate ended a nearly twenty-year stint in 2019 as a columnist for the Detroit Free Press, where she was an award-winning voice for children and advocate for improved education, government, and race relations. She calls herself "a writer by trade, warrior by necessity."

ADVANCE PRAISE FOR DEAR BLACK GIRL: LETTERS FROM YOUR SISTERS ON STEPPING INTO YOUR POWER

“Dear Black Girl is for the little Black girls who still need the language to process their magic. In a world that often leaves us with more questions than answers, this book is a literal gift.” —Bassey Ikpi, author of I’m Telling the Truth, but I’m Lying

“Dear Black Girl is the empowering, affirming love letter our girls need to thrive in a world that does not always protect, nurture, or celebrate us.” —Tarana Burke, founder of the Me Too Movement

“This book, a conversation across generations, is a loving, trenchant reminder that Black girls deserve tenderness, care, and the forgiving mirrors that are another Black woman’s eyes.” —Dr. Brittney Cooper, author of Eloquent Rage

Dear Black Girl: Letters From Your Sisters on Stepping Into Your Power (Paperback)

That They Lived: African Americans Who Changed the World (Painted Turtle) (Paperback)