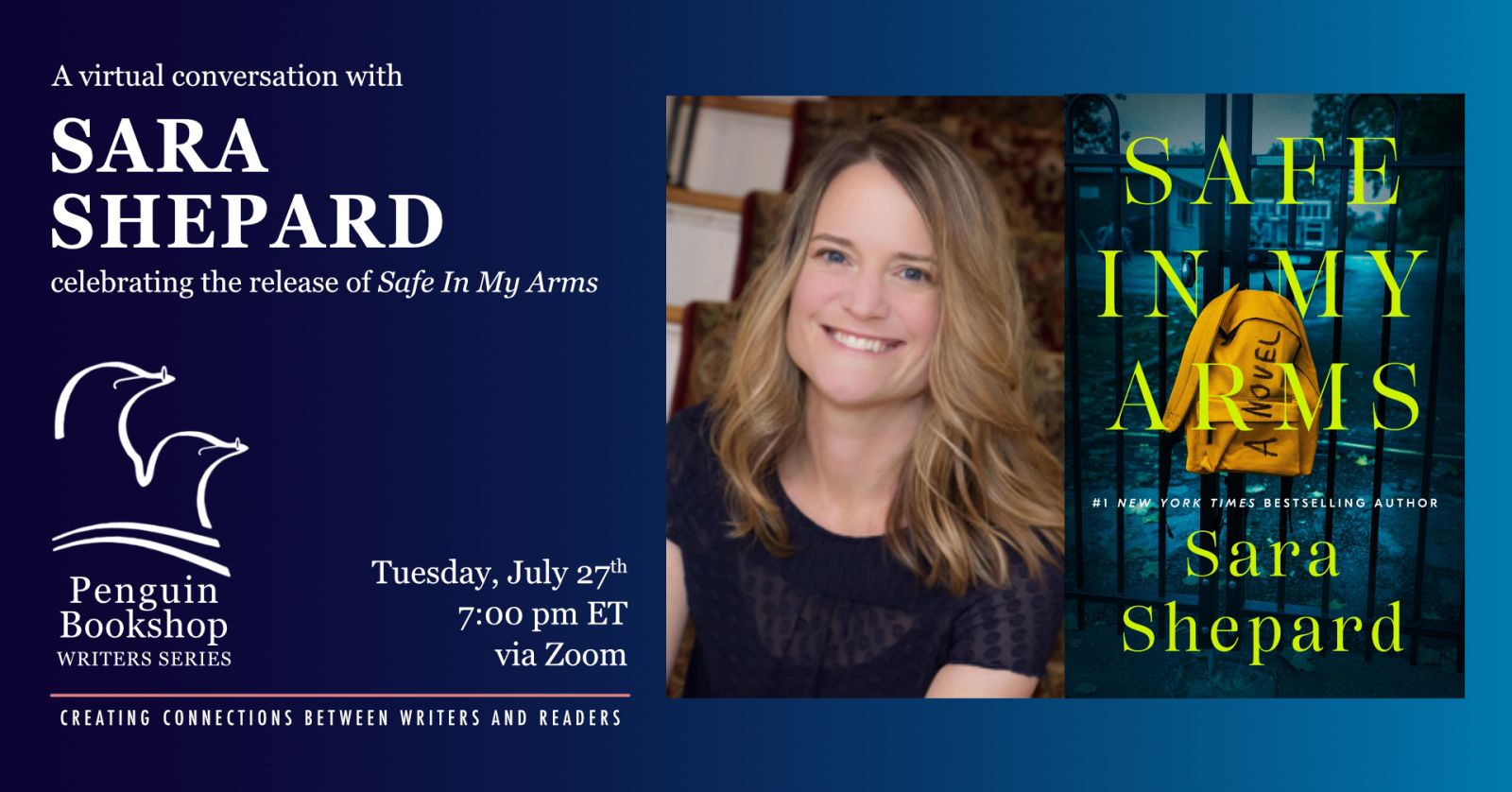 The Penguin Bookshop Writers Series will host New York Times bestselling author Sara Shepard  to celebrate the launch of her newest work, Safe In My Arms! The conversation should last approximately one hour, and will conclude with a Q&A from the audience. This event will be held virtually via Zoom, and advance registration is required.

Sara Shepard is the #1 New York Times bestselling author of the Pretty Little Liars series. She has also written other young adult series and novels, including The Lying Game, The Heiresses, and The Perfectionists. Sara now lives outside of Philadelphia with her husband, sons, and dogs.

ABOUT SAFE IN MY ARMS

Andrea, Lauren, and Ronnie—outsiders among the school's manicured and ultra-wealthy community—each arrive at the Silver Swans Welcome Breakfast with secrets to protect. Andrea is running away from a painful and misunderstood past she can’t ever let catch up with her. Lauren is recovering from a postpartum condition her husband has warned her not to disclose. And Ronnie is hiding herself and her daughter from the one man who could destroy their lives forever.

After the first day of classes, notes appear in their children’s backpacks—notes that indicate someone at the school knows their darkest secrets and wants them and their children out of the school. A few days later, the principal, Piper Jovan, is attacked near her office, and it becomes clear that Silver Swans isn’t as flawless as the brochures would have you believe. Andrea, Lauren and Ronnie, who were all at the school that day, quickly become prime suspects, and they must work together to uncover the school's many secrets, figure out who's trying to frame them, and keep their lives from crashing down around them.

ADVANCE PRAISE FOR SAFE IN MY ARMS

“A smart and insightful page-turner… a twisty mystery filled with keen observations about the impossibly high standards of motherhood and the critical importance of finding friends willing to accept you as the forgivably flawed person and parent you really are.” —Kimberly McCreight, New York Times bestselling author of Reconstructing Amelia and A Good Marriage

“No one writes about secrets like Sara Shepard! Safe In My Arms is a whopping page-turner of a book, packed with lies, betrayals, and head-spinning twists. I’ll never think about preschools the same way again.” —Samantha Downing, USA Today bestselling author of My Lovely Wife and He Started It

“Taut, smart and twisted, Safe in My Arms is everything I love in a suspense novel, a whip-smart tale of just how far a mother will go to protect her child. All the stars!” —Kimberly Belle, internationally bestselling author of Stranger in the Lake

“Sara Shepard has crafted a twisty, compelling meditation on the long-buried secrets that haunt us, and the ways in which embracing those dark aspects of our pasts can ultimately set us free.” —E.G. Scott, internationally bestselling author of In Case of Emergency

Safe in My Arms (Paperback)