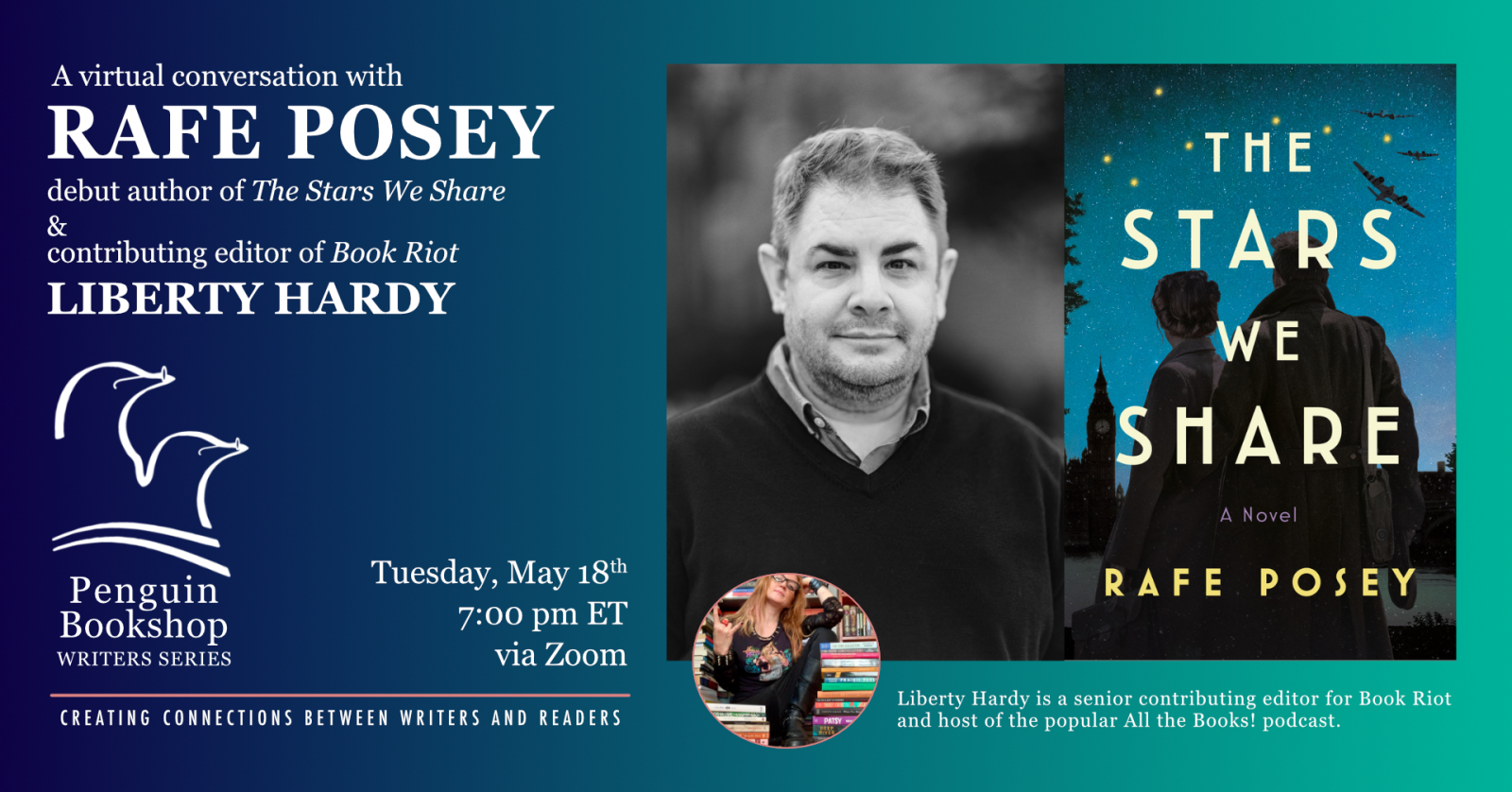 “A love story at its core, The Stars We Share explores the layered repercussions of war and secrecy on the bodies and souls of two unforgettable characters. Whether portraying the bewildering map of a star-studded sky, the low whine of an incoming Zero, or the shifting, tender terrain of love and family, Posey’s exquisitely rendered prose dazzles from start to finish.”  —Georgia Hunter, New York Times bestselling author of We Were the Lucky Ones

The Penguin Bookshop Writers Series is excited to host debut novelist Rafe Posey to celebrate the launch of his new book, The Stars We Share. Rafe will be joined by senior contributing editor of Book Riot, Liberty Hardy, to discuss the book, Rafe's writing process, and everything in between. The conversation should last approximately one hour, and will conclude with a Q&A from the audience. This event will be held virtually via Zoom.  Advance registration is required.

Rafe Posey earned his MFA from the University of Baltimore and currently teaches writing, English, and humanities courses at a maximum security prison in Maryland. His short-story collection, The Book of Broken Hymns, was a Lambda Literary Award finalist. The Stars We Share is his debut novel.

Liberty Hardy is a senior contributing editor for Book Riot and host of the popular All the Books! podcast. She lives in the great state of Maine, where she reads 500-600 books a year and hangs out with her three cats, who hate to read.

It’s 1927 when Alec and June meet as children in a tranquil English village. Alec, an orphan, anchors himself in the night sky and longs for adventures. June memorizes maps and railway timetables, imagining a future bright with possibilities. As the years pass, their loves feels inevitable, but soon the Second World War separates them. Alec enlists as a Royal Air Force pilot flying daredevil fighter sorties at night; June finds her calling as a codebreaker at Bletchley Park, covert work that will mean keeping her contribution to the war effort a secret from Alec forever. Each is following a dream—but those dreams force them apart for years at a time.

Spanning forty years and shifting from bustling Indian ports to vibrant gardens in Edinburgh to a horse farm in Kenya, The Stars We Share is a poignant, heart-wrenching novel about the decisions and concessions that make a life and a love worth having.

“Dazzles from start to finish.” —Georgia Hunter, New York Times bestselling author of We Were the Lucky Ones

“Rafe Posey’s impressive debut, The Stars We Share, takes us deep into a relationship between childhood sweethearts tested time and again by war, secrets, and their own humanity. Nuanced, insightful, and beautifully written, the story unsentimentally documents June and Alec as they struggle to remain true to each other and to themselves while forging a better life. This is one of the most accomplished first novels you’ll read this year.” —Mark Sullivan, #1 New York Times bestselling author of Beneath a Scarlet Sky