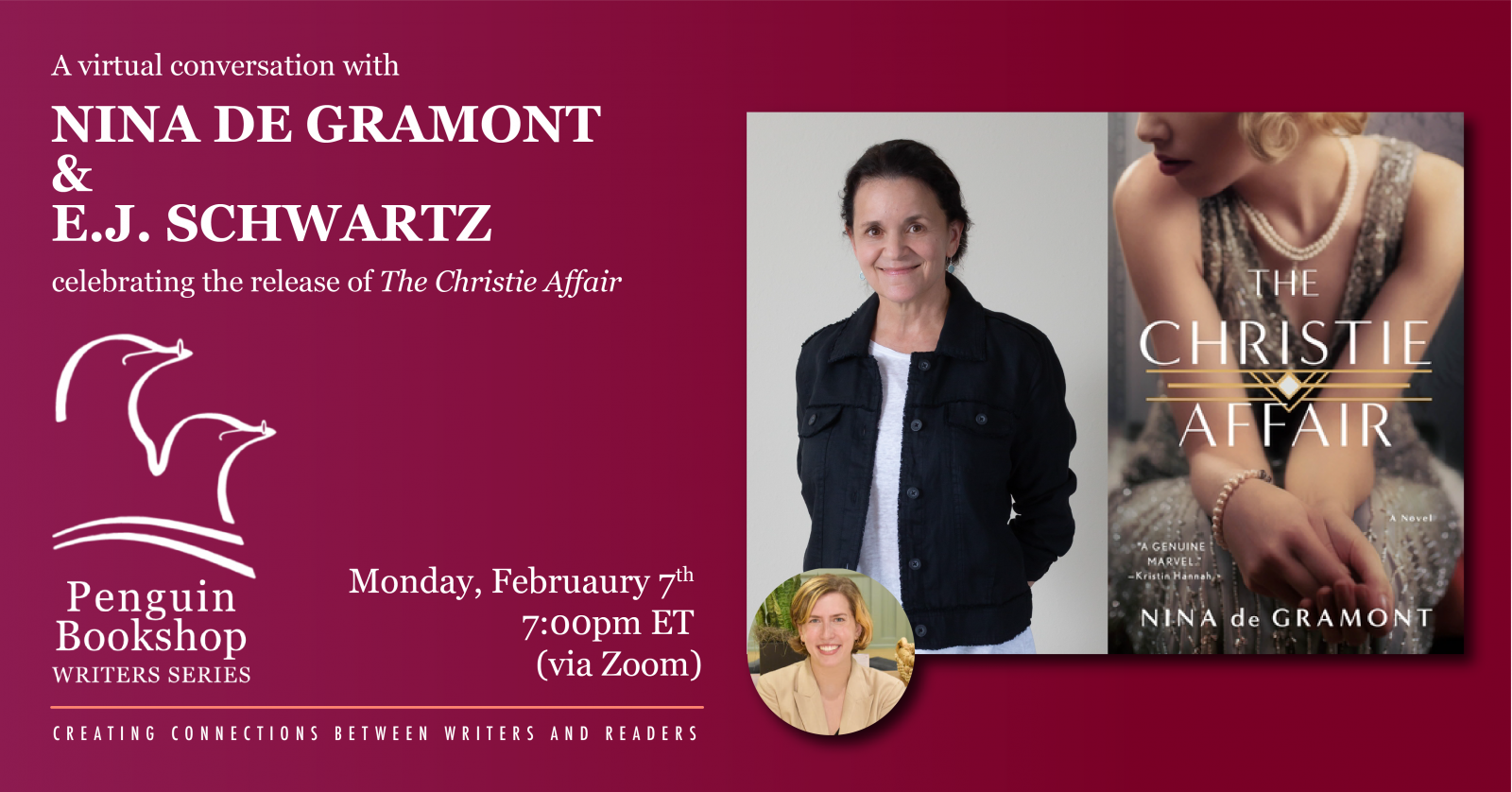 An Evening with Nina de Gramont & E.J. Schwartz
Celebrating the Release of The Christie Affair

The Penguin Bookshop Writers Series will host author Nina de Gramont to celebrate the release of her newest novel, The Christie Affair! Nina will be joined in conversation by fellow author E.J. Schwartz to discuss her book and her experiences as a writer. The conversation should last approximately one hour, and will conclude with a Q&A from the audience. This event will be held virtually via Zoom, and advance registration is required.

Nina de Gramont (also known as Marina Gessner) lives in coastal North Carolina with her husband, the writer David Gessner. She teaches at the University of North Carolina Wilmington and is almost always in the company of her two dogs, Missy and Isabelle. She’s the author of the acclaimed Meet Me at the River, Every Little Thing in the World, Gossip of the Starlings, The Last September, as well as The Distance from Me to You, which has recently been optioned for a movie.

E.J. Schwartz is a writer who loves cozy sweaters, skincare, and a24 films. In high school, she was a competitive gymnast and briefly on an all-star cheer team that was eighth in the world. Now that she no longer flips on a daily basis, she writes a lot about people who do.

After graduating from Susquehanna University with a B.A. in creative writing and a minor in publishing, E.J. went on to get her MFA from the University of North Carolina Wilmington. There, she spent her time teaching, volunteering, roller skating, and learning how to grow plants. Her published work can be found in The New York Times, Barrelhouse, Threadcount, JMWW, Ghost Parachute, and Necessary Fiction, among others.

E.J. is the author of Before We Were Blue, a YA novel pitched as Netflix’s CHEER meets Girl, Interrupted, which Kirkus called “a gut-wrenching and cathartic page-turner about identity, desire, and the strength it takes to heal.” E.J. is represented by Kaitlyn Johnson at Belcastro Agency. She tweets @byEJSchwartz.

ABOUT THE CHRISTIE AFFAIR

Nina de Gramont's The Christie Affair is a beguiling novel of star-crossed lovers, heartbreak, revenge, and murder—and a brilliant re-imagination of one of the most talked-about unsolved mysteries of the twentieth century.

Every story has its secrets.
Every mystery has its motives.

“A long time ago, in another country, I nearly killed a woman. It’s a particular feeling, the urge to murder. It takes over your body so completely, it’s like a divine force, grabbing hold of your will, your limbs, your psyche. There’s a joy to it. In retrospect, it’s frightening, but I daresay in the moment it feels sweet. The way justice feels sweet.”

The greatest mystery wasn’t Agatha Christie’s disappearance in those eleven infamous days, it’s what she discovered.

London, 1925: In a world of townhomes and tennis matches, socialites and shooting parties, Miss Nan O’Dea became Archie Christie’s mistress, luring him away from his devoted and well-known wife, Agatha Christie.

The question is, why? Why destroy another woman’s marriage, why hatch a plot years in the making, and why murder? How was Nan O’Dea so intricately tied to those eleven mysterious days that Agatha Christie went missing?

ADVANCE PRAISE FOR THE CHRISTIE AFFAIR

"The Christie Affair is a genuine marvel. An astonishingly clever novel that manages to be both a deeply satisfying mystery and a profoundly moving story about lost love and the many ways in which grief can shape one's character. Full of unexpected twists and written in beautiful prose, The Christie Affair brilliantly answers a question that has haunted readers for years: What happened to Agatha Christie in the days she was missing? Nina de Gramont takes this thread of a story and weaves it into a rich and vibrant tapestry." -- Kristin Hannah, author of The Four Winds

"This novel about the 11-day disappearance of Agatha Christie, told from the point of view of Christie’s husband’s mistress, is such a delight: intriguing, fast-paced, and elegantly written. Nina de Gramont takes you on an adventure through the English countryside with as many twists and turns as, well, an Agatha Christie novel. The unlikely alliances, complex motivations, and jaw-dropping surprises will keep you riveted until the very last page.” -- Christina Baker Kline, author of Orphan Train and The Exiles

“Dare I admit I haven’t read any Agatha Christie or know about her disappearance? I feared this might somehow diminish The Christie Affair for me. But Nina de Gramont’s skillful storytelling is exceeded only by her tenderness for her characters, and I was swept up, turning the pages and savoring them, too. This is a cracking good read!"-- Therese Fowler, author of A Good Neighborhood

The Christie Affair: A Novel (Hardcover)

Before We Were Blue (Paperback)