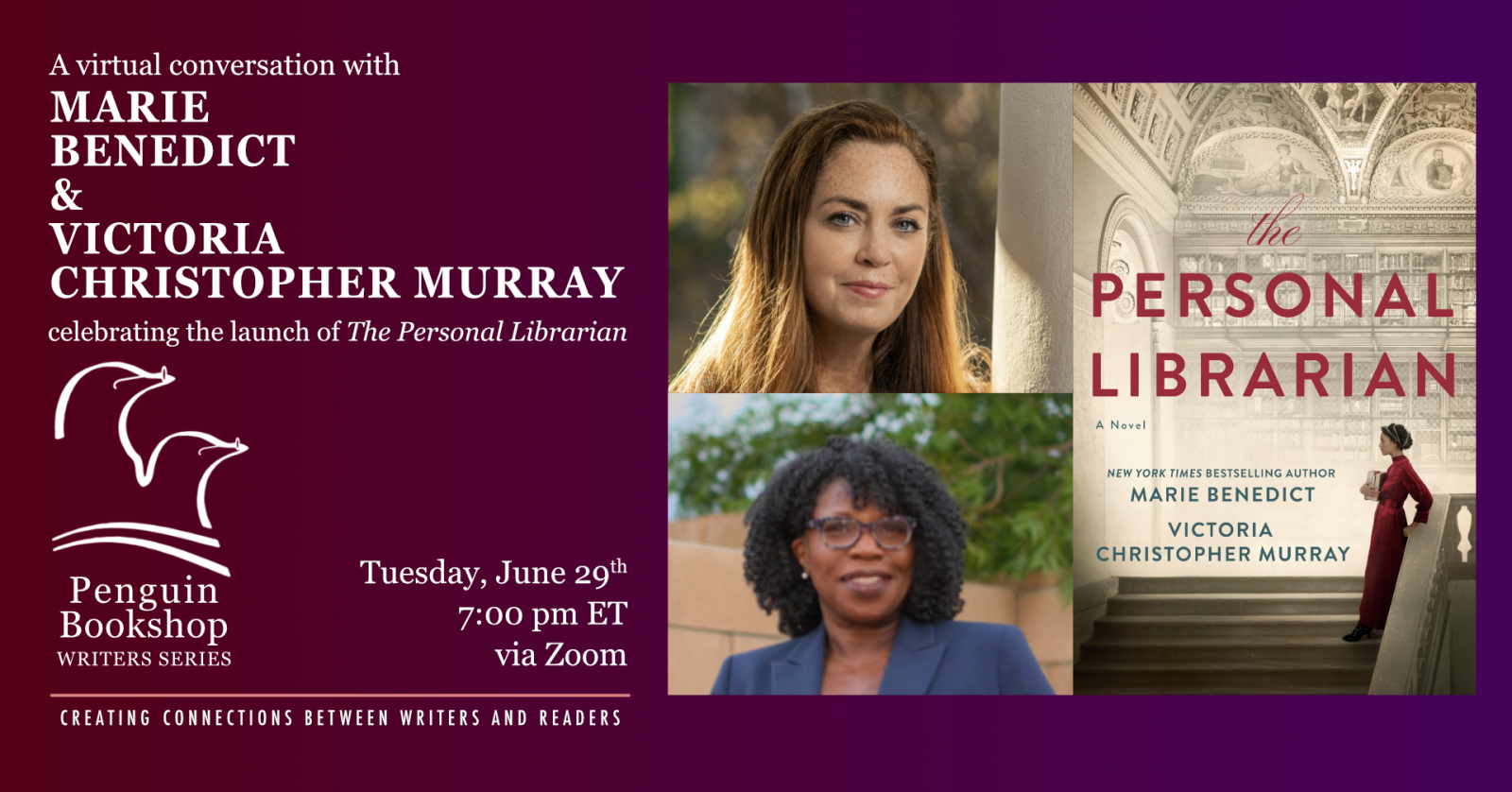 The Penguin Bookshop Writers Series will host authors Marie Benedict and Victoria Christopher Murray to celebrate the launch of their novel, The Personal Librarian! The conversation should last approximately one hour, and will conclude with a Q&A from the audience. This is a ticketed event, and will be held virtually via Zoom, and advance registration is required.

Ticketed options range in price from $0-32.  Tickets that include a book will include a signed copy of The Personal Librarian. As this event is being held on the book's release date (6/29), the books will not be available to attendees until the day of the event.

Victoria Christopher Murray is an acclaimed author with more than one million books in print. She has written more than twenty novels, including Stand Your Ground, a NAACP Image Award Winner for Outstanding Fiction and a Library Journal Best Book of the Year. She holds an MBA from the NYU Stern School of Business.

ABOUT THE PERSONAL LIBRARIAN

In her twenties, Belle da Costa Greene is hired by J. P. Morgan to curate a collection of rare manuscripts, books, and artwork for his newly built Pierpont Morgan Library. Belle becomes a fixture on the New York society scene and one of the most powerful people in the art and book world, known for her impeccable taste and shrewd negotiating for critical works as she helps build a world-class collection.

But Belle has a secret, one she must protect at all costs. She was born not Belle da Costa Greene but Belle Marion Greener. She is the daughter of Richard Greener, the first Black graduate of Harvard and a well-known advocate for equality. Belle's complexion isn't dark because of her alleged Portuguese heritage that lets her pass as white--her complexion is dark because she is African American.

The Personal Librarian tells the story of an extraordinary woman, famous for her intellect, style, and wit, and shares the lengths to which she must go--for the protection of her family and her legacy--to preserve her carefully crafted white identity in the racist world in which she lives.

ADVANCE PRAISE FOR THE PERSONAL LIBRARIAN

“An extraordinary tale that is both brilliant historical fiction and an important and timely commentary on racism.  By holding up an unflinching mirror and illuminating this little-known chapter in American history, these two gifted authors have penned a work that is a must-read.” —Pam Jenoff, New York Times bestselling author of The Woman with the Blue Star

“A marvel of a story. This unflinching look at one woman’s meteoric rise through New York’s high society is enthralling, lyrical, and rife with danger. Belle’s painful secret and her inspiring courage will capture – and break – your heart. Serious kudos to Benedict and Murray for bringing this true story to life.” —Fiona Davis, New York Times bestselling author of The Lions of Fifth Avenue

“The Personal Librarian illuminates the extraordinary life of an exceptional, intelligent woman who had to make the impossible choice to live as an imposter or sacrifice everything she’d achieved and deserved. That Belle denied her true identity in order to protect herself and her family from racial persecution speaks not only to her times but also to ours, a hundred years later. All that glitters is not gold. This is a compelling and important story.” —Therese Anne Fowler, New York Times bestselling author of A Good Neighborhood