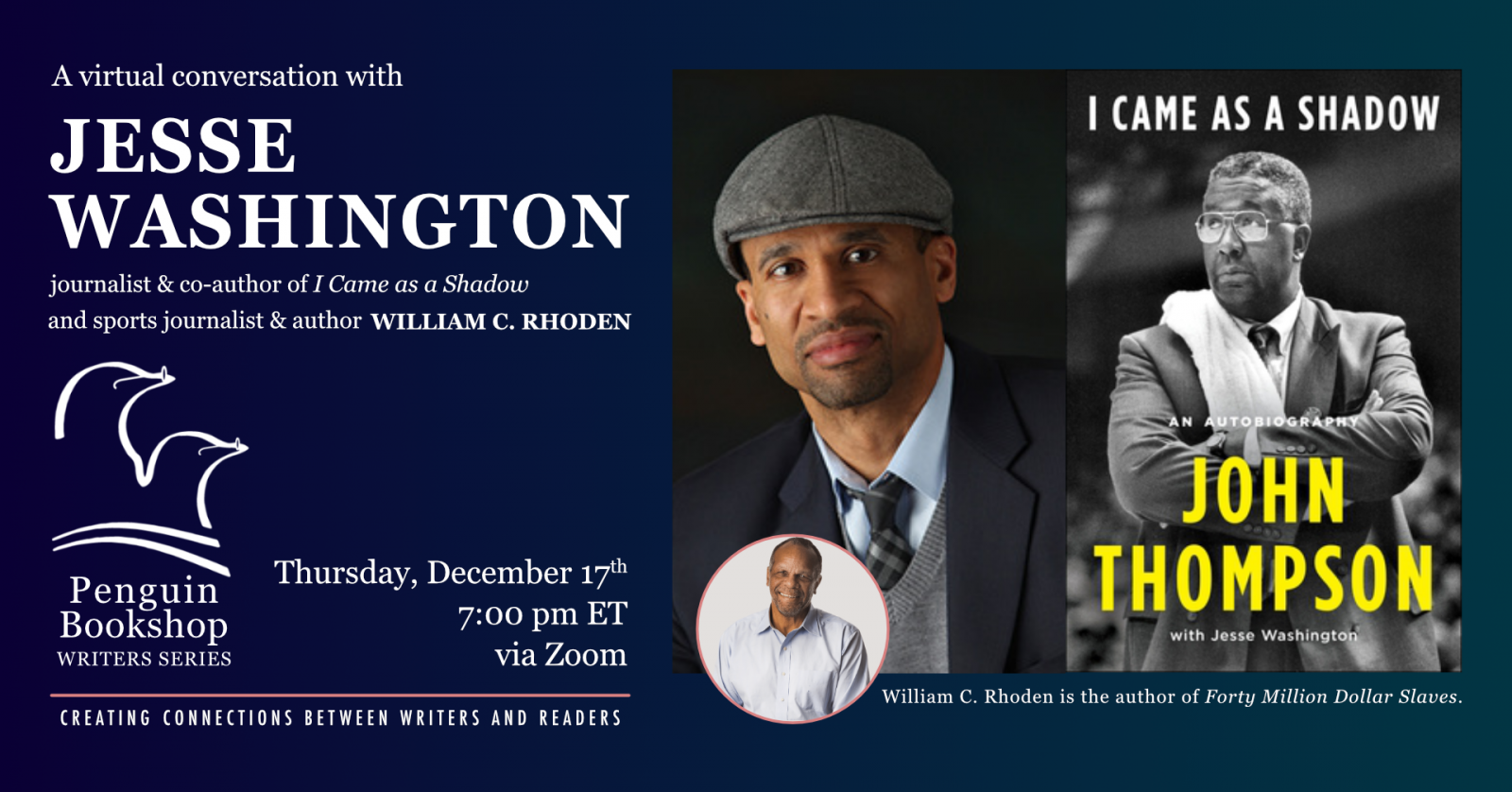 The long-awaited autobiography from Georgetown University’s legendary coach, whose life on and off the basketball court threw America’s unresolved struggle with racial justice into sharp relief.

Join us for a very special evening with journalist and author Jesse Washington as we celebrate the release of his latest book I Came as a Shadow. Jesse will be joined by fellow sports journalist William C. Rhoden to discuss John Thompson's career and Jesse's experiences working on the biography with him. This event will be held virtually via ZOOM and is free to the public. It will last approximately one hour and will conclude with a Q&A from the audience. Advance registration is required.

I Came as a Shadow will be released on Tuesday, December 15th. Purchase your signed copy from Penguin Bookshop today!

Jesse Washington was born in Brooklyn to an artist father and social worker mother. His family moved to Poughkeepsie, NY, when he was in grade school, and he began his career covering sports for The Poughkeepsie Journal the summer after his freshman year at Yale University. The next summer he returned to the Journal and switched to local news. He got his first front-page byline on his 19th birthday, on a story about Louis Farrakhan’s visit to the home of Tawana Brawley.

While in college, Jesse became a DJ, pledged Kappa Alpha Psi, and played on the basketball team. He also worked for Business Week magazine, the Hartford Courant, The New York Times, and completed a summer internship with The Associated Press. He started a reporting job in AP’s Detroit bureau after graduating from Yale in 1992. A year later, Jesse transferred to AP’s national editing desk in New York City. In 1996, he became assistant bureau chief for New York City.

At the end of 1996, Jesse left AP to become managing editor of Vibe magazine. In 1998, he was named founding editor-in-chief of Blaze, a Vibe spinoff and the biggest music magazine launch ever. In the premiere issue, Jesse made news with an editorial describing how the artist Wyclef Jean threatened him with a gun over a negative album review, which Wyclef denied. Jesse was hospitalized after another confrontation with a rapper angered over his coverage. He was fired in 1998 after a dispute with the owner of the magazine, who refused to publish Jesse's editorial about the acquittal of his friend in a high-profile Manhattan murder case.

Next, Jesse started a company with his father that published two coffee-table books, on the black artists Romare Bearden and Elizabeth Catlett. He co-founded the street basketball magazine Bounce and wrote eight cover stories for the Houston Press. In 2003, Jesse returned to the AP as Entertainment Editor, supervising a team in New York and Los Angeles covering film, television, music and celebrities. He made news in that position due to an experimental story describing how AP tried not to publish anything about Paris Hilton for one week, and again when news leaked that AP had prepared an obituary for Britney Spears.

Jesse's novel, Black Will Shoot, was published in 2008. Later that year — three months before the election of the first black president — he began covering race for AP. Since 2015, Jesse has been a senior writer for ESPN's The Undefeated, a platform for exploring the intersections of race, sports and culture. He is currently writing the autobiography of former Georgetown basketball coach John Thompson, I Came As A Shadow, to be published in 2021 by Henry Holt. Jesse has won a National Journalism Award from the Asian-American Journalists Association, Journalist of the Year award from the Philadelphia Association of Black Journalists, two feature awards from the National Association of Black Journalists, and a 2019 Associated Press Sports Editors Top 10 award for column writing.

Jesse is married with four children and a member of the Baha'i Faith. You can find him giving folks the business on a basketball court near you.

William C. Rhoden, the former award-winning sports columnist for The New York Times and author of “Forty Million Dollar Slaves,” is a writer-at-large for The Undefeated.

ABOUT I CAME AS A SHADOW

After three decades at the center of race and sports in America, the first Black head coach to win an NCAA championship makes the private public at last. Chockful of stories and moving beyond mere stats (and what stats! three Final Fours, four times national coach of the year, seven Big East championships, 97 percent graduation rate), Thompson’s book drives us through his childhood under Jim Crow segregation to our current moment of racial reckoning. We experience riding shotgun with Celtics icon Red Auerbach, and coaching NBA Hall of Famers like Patrick Ewing and Allen Iverson. How did he inspire the phrase “Hoya Paranoia”? You’ll see. And thawing his historically glacial stare, Thompson brings us into his negotiation with a DC drug kingpin in his players’ orbit in the 1980s, as well as behind the scenes of his years on the Nike board.

Thompson’s mother was a teacher who couldn’t teach because she was Black. His father could not read or write, so the only way he could identify different cements at the factory where he worked was to taste them. Their son grew up to be a man with his own life-sized statue in a building that bears his family’s name on a campus once kept afloat by the selling of 272 enslaved people. This is a great American story, and John Thompson’s experience sheds light on many of the issues roiling our nation. In these pages—a last gift from “Coach”—he proves himself to be the elder statesman whose final words college basketball and the country need to hear.

I Came As A Shadow is not a swan song, but a bullhorn blast from one of America’s most prominent sons. Huddle up.

PRAISE FOR I CAME AS A SHADOW

“A story of hard-won mobility and triumph…. Just like its subject, I Came As a Shadow is smart, plainspoken, and principled.” —ESPN's The Undefeated

“I Came As a Shadow is pure John Thompson—direct, honest, and uncompromising. It's the story of how his large life unfolded amidst our nation's ongoing struggle to deal honestly with race. John saw himself first and foremost as a teacher. The lessons he leaves behind with this, his final gift to us, are more important than ever.” —President Bill Clinton

I Came As a Shadow: An Autobiography (Hardcover)