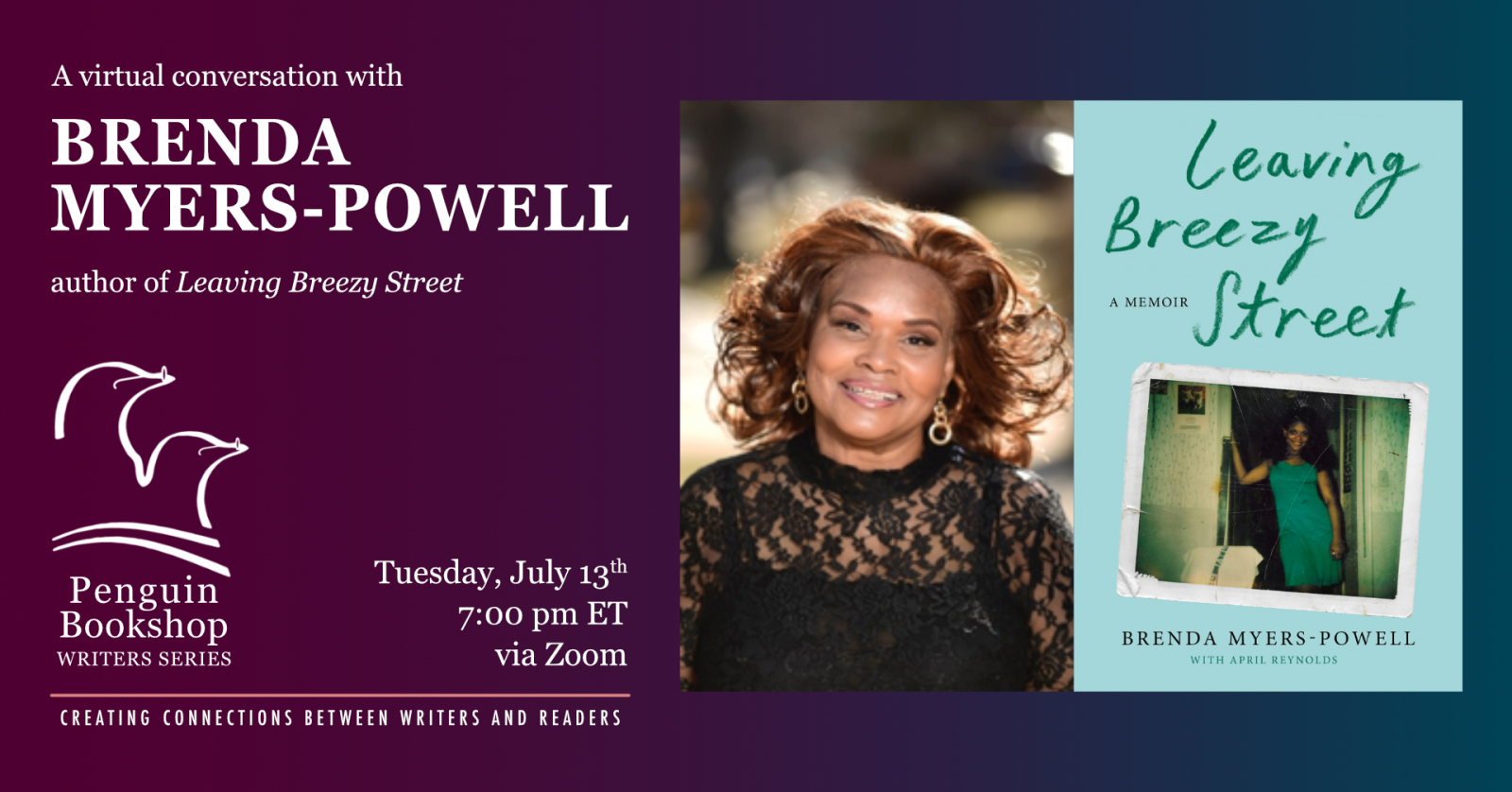 Belonging on the shelf with Jeannette Walls’s The Glass Castle and Ishmael Beah’s A Long Way Gone, Leaving Breezy Street—the stunning account of Brenda Myers-Powell’s brutal and beautiful life—is a critical addition to the American canon.

The Penguin Bookshop Writers Series will host author Brenda Myers-Powell to celebrate the release of her memoir, Leaving Breezy Street. The conversation should last approximately one hour, and will conclude with a Q&A from the audience. This event will be held virtually via Zoom, and advance registration is required.

Brenda Myers-Powell has been advocating for victims of sex trafficking since 1997. She is the co-founder and executive director of the Dreamcatcher Foundation, and has sat on the board of numerous organizations. In 2020, she was selected to serve on the U.S. Advisory Council on Human Trafficking. Brenda’s work with Dreamcatcher and victims was the focus of the Sundance Award–winning documentary Dreamcatcher.

Belonging on the shelf with Jeannette Walls’s The Glass Castle and Ishmael Beah’s A Long Way Gone, Leaving Breezy Street—the stunning account of Brenda Myers-Powell’s brutal and beautiful life—is a critical addition to the American canon.

Fourteen years old, poor, Black, mother dead, two babies to feed and clothe, and a grandmother who is not full of motherly kindness, to put it mildly. What money-making options are open to a girl like Brenda Myers?

When Breezy, as she came to call herself, hit the streets of Chicago as a prostitute in 1973 she was barely a teenager. But she was pretty and funny as hell, and determined to support her daughters and make a living. For the next twenty-five years, she moved across the country, finding new pimps, parties, drugs, and endless, profound heartache. And she also—astonishingly—managed to find the strength to break from a brutal world and not only save herself but save future Breezys.

Great, compelling memoirs can bring us into worlds that have been beyond our comprehension and make us “get it.” What these books tell us is NOT that we can all move beyond the lives into which we were born. The lesson is that everyone deserves to be truly seen by others and offered a path forward.

“Throughout a life of uphill battles, abuse, and hustling, Myers-Powell has managed to retain her humor, attitude, and fight, all on full display in this stirring memoir. . . . Graphic but never gratuitous, Leaving Breezy Street is engaging and candid. Those who like gritty memoirs will relish it, and it is a perfect nonfiction crossover for urban fiction readers.” —Booklist

“An earnest memoir of life on the mean streets by the founder of a survivors group. . . . The author’s story, co-written by Reynolds, is consistently frank and often shocking.” —Kirkus Reviews

“Brenda Meyers-Powell’s story is testament that there are, indeed, second acts in life. Her journey as told in Leaving Breezy Street is remarkable, if not chilling, as she faces a cascade of violence and betrayal, mostly at the hands of men. But astonishingly she never loses her verve or her humor, and emerges on the other side not only intact but as an inspiration.” —Alex Kotlowitz, author of An American Summer, winner of the J. Anthony Lukas Book Prize

“Through all the love that she’s missed on, Brenda Myers-Powell gives hope. She is a voice for the voiceless. Also she’s funny, she’s intense, she’s retained her soul, and redemption turns her into a potential leader of the most needed kind: she’s real. I hope that the light that Brenda allowed through reaches you too.” —Mariane Pearl, author of A Mighty Heart: The Brave Life and Death of My Husband Daniel Pearl

“Brenda Myers-Powell has a powerful and true story. From poverty, prostitution and jail, she struggled to become an advocate for trafficked women, a public speaker and now, the author of this deeply moving and amazing book chronicling her unbelievable journey to new life. A testimony to human possibilities in the face of great odds. It’s hard to put down.” —Edwina Gately, author of I Hear a Seed Growing

“To stand in one truth and allow yourself to be seen is one of the bravest things an individual can do. In her memoir, Brenda Myers-Powell is brave, authentic, and a bit gritty in a remarkable way. At every moment in Leaving Breezy Street you felt you were there, experiencing the pain and finding the resilience to keep pushing to find joy through it all alongside her.” —Marcus Samuelsson, author of Yes, Chef: A Memoir