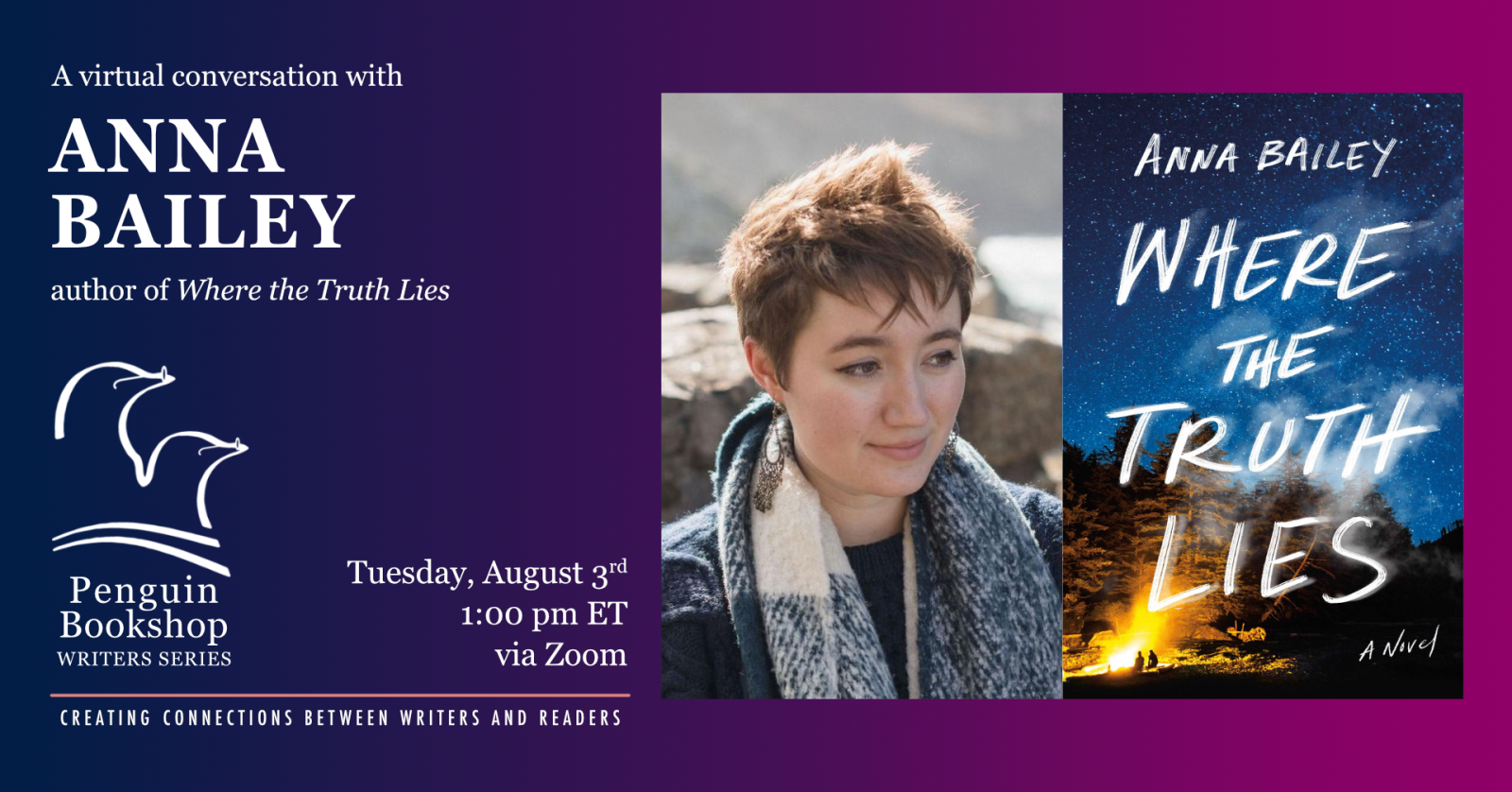 The Penguin Bookshop Writers Series will host debut author Anna Bailey to celebrate the launch of her new novel, Where the Truth Lies! The conversation should last approximately one hour, and will conclude with a Q&A from the audience. This event will be held virtually via Zoom, and advance registration is required.

Can't make it at lunchtime? Not to worry! Register anyway, and we will send you the recording after the event to view at your own pace.

Anna Bailey was born in Bristol in 1995 and spent her childhood in Gloucestershire. She studied Creative Writing at Bath Spa university and wanted to become a journalist, but ended up moving to Colorado and becoming a Starbucks barista instead. In 2018 she returned to the UK, where she enrolled in the Curtis Brown Creative Novel-writing course and wrote her first novel inspired by her experience of living in small-town America.

ABOUT WHERE THE TRUTH LIES

When a teenaged girl disappears from an insular small town, all of the community’s most devastating secrets come to light in this stunningly atmospheric and slow-burning suspense novel—perfect for fans of Megan Miranda and Celeste Ng.

The town of Whistling Ridge guards its secrets.

When seventeen-year-old Abigail goes missing, her best friend Emma, compelled by the guilt of leaving her alone at a party in the woods, sets out to discover the truth about what happened. The police initially believe Abi ran away, but Emma doesn't believe that her friend would leave without her, and when officers find disturbing evidence in the nearby woods, the festering secrets and longstanding resentment of both Abigail’s family and the people of Whistling Ridge, Colorado begin to surface with devastating consequences.

Among those secrets: Abi's older brother Noah’s passionate, dangerous love for the handsome Rat, a recently arrived Romanian immigrant who has recently made his home in the trailer park in town; her younger brother Jude's feeling that he knows information he should tell the police, if only he could put it into words; Abi's father's mercurial, unpredictable rages and her mother's silence. Then there is the rest of Whistling Ridge, where a charismatic preacher advocates for God's love in language that mirrors violence, under the sway of the powerful businessman who rules the town, insular and wary of outsiders.

But Abi had secrets, too, and the closer Emma grows to unraveling the past, the farther she feels from her friend. And in a tinder box of small-town rage, and all it will take is just one spark—the truth of what really happened that night—to change their community forever.

ADVANCE PRAISE FOR WHERE THE TRUTH LIES

"With Where the Truth Lies, Anna Bailey bursts onto the scene with a wonderfully haunting debut. Small-town intrigue, exquisitely drawn." —Jane Harper, author of The Dry and The Lost Man

"Where the Truth Lies is as atmospheric as it gets - a stunning debut that delivers on every level.  Reminded me of Jane Harper's The Dry." —Renee Knight, author of Disclaimer

"An elegant, mesmerizing debut—Anna Bailey explores festering secrets and family trauma with a sharp, yet tender gaze. This book reads like a whisper in the dark." —Danya Kukafka, author of Girl in Snow

"Chilling and compulsive. Where the Truth Lies is a dazzling debut." —Kate Hamer, author of The Girl in the Red Coat

"A terrific debut about guilt, secrets and complex family dynamics - the writing is vivid & assured: Anna Bailey is definitely one to watch." — Lucy Atkins, author of Magpie Lane

"Brilliant! Could not put it down. It's utterly gripping and beautifully written." — Katie Fforde, author of A Rose Petal Summer

"Gripping and so beautifully written Where the Truth Lies is spellbinding; dark and menacing, but also so full of love and hope. I loved it. I cried." —Cressida McLaughlin, author of The Cornish Cream Tea Summer

“Where the Truth Lies brilliantly conjures up the oppressive claustrophobia of the small town and I felt so strongly about some of the characters that I had to check the ending to make sure they were ok! Extremely well written... fantastic.” — Harriet Tyce, bestselling author of The Lies You Told

"Anna Bailey writes like a dream about teenage love and lust, the terror of knowledge and the claustrophobia of families and of small towns.Tall Bones is as brutal, as bittersweet, as tender and as tense as first love itself." — Emma Flint, author of Little Deaths

"Simmering resentments and long-held prejudices boil over in this beautifully realised evocation of small-town America. In Anna Bailey’s deft hands, brutal events are drawn so tenderly that your heart will break. I loved it." — Kate Riordan, author of The Heatwave

"Beautifully written and very moving, this is an assured debut." —The Guardian

"This is a striking first novel, a chilling insight into an oppressive world, where bad thoughts and bad deeds ripple just below the surface." —The Observer

Where the Truth Lies: A Novel (Hardcover)