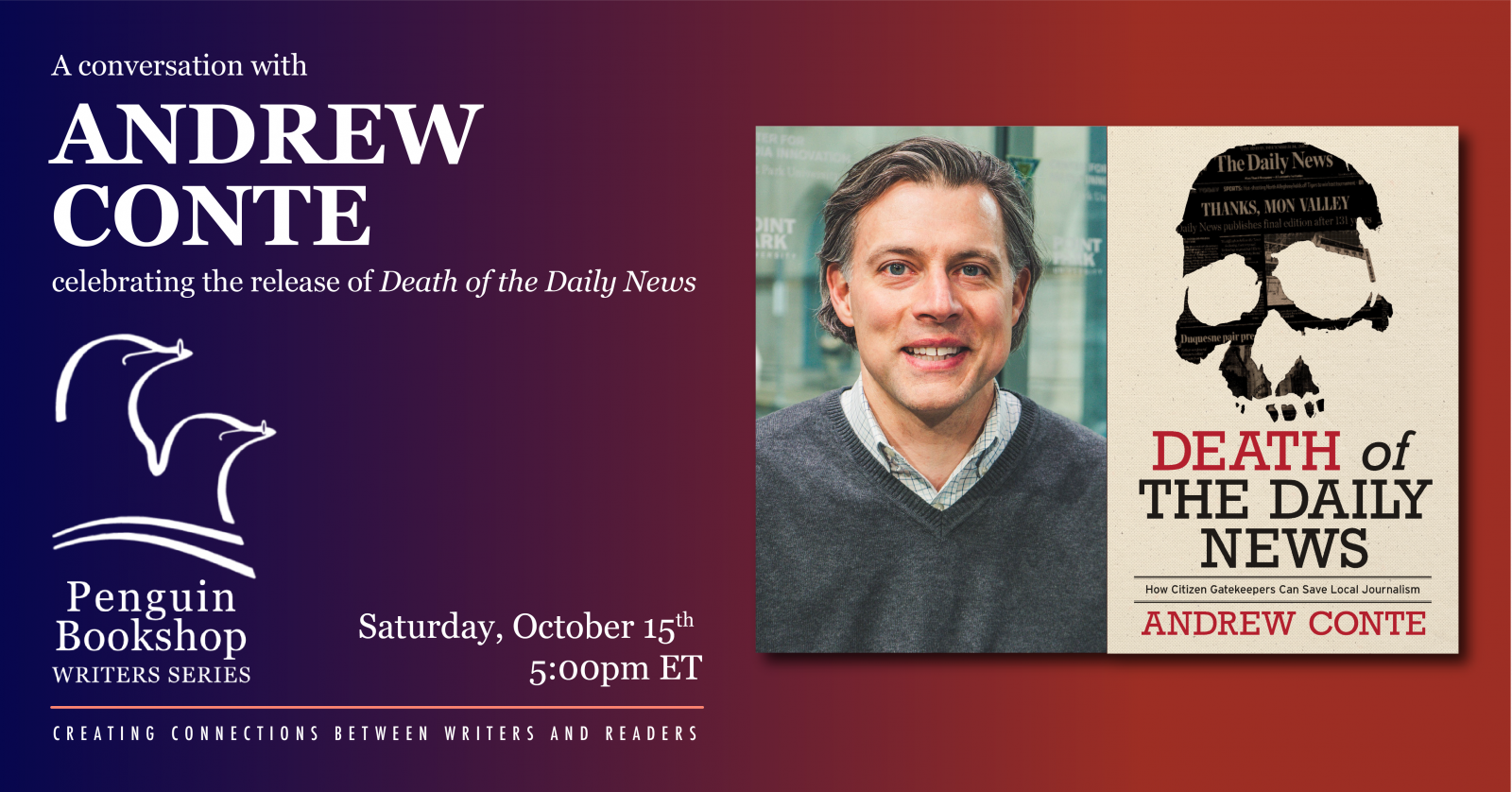 Penguin Bookshop Writers Series:
An Evening with Andrew Conte
celebrating the release of Death of the Daily News: How Citizen Gatekeepers Can Save Local Journalism

We are delighted to host local author Andrew Conte for an evening at the store to celebrate the releae of his latest book, Death of the Daily News: How Citizen Gatekeepers Can Save Local Journalism, which is due out in this September! Andrew will engage in a conversation about the book, and will sign copies for guests afterwards as well.

Andrew Conte founded the Center for Media Innovation at Point Park University in Pittsburgh, which serves as a laboratory for the present and future of local journalism. He previously worked as an investigative journalist, and he has authored several nonfiction books.

ABOUT DEATH OF THE DAILY NEWS

The City of McKeesport in southwestern Pennsylvania once had a population of more than fifty thousand people and a newspaper that dated back to the nineteenth century. Technology has caused massive disruption to American journalism, throwing thousands of reporters out of work, closing newsrooms, and leaving vast areas with few traditional news sources—including McKeesport. With the loss of their local paper in 2015, residents now struggle to make sense of what goes on in their community and to separate facts from gossip—often driven by social media. The changes taking place in this one Pennsylvania community are being repeated across the United States as hundreds of local newspapers close, creating news deserts and leaving citizens with little access to reliable local journalism. The obituary for local news, however, does not have to read all bad: Even in the bleakest places, citizens are discovering what happens in their communities and becoming gatekeepers to information for the people around them. In McKeesport, citizens are attempting to make sense of the news on their own, for better and worse. This experiment not only offers clues about what happens after a local newspaper dies, but also provides guidance to the way forward.

PRAISE FOR DEATH OF THE DAILY NEWS

“Conte exposes the weaknesses of both traditional top-down journalism and the ‘citizen gatekeepers’ who have since filled the breach, while arguing that the answer resides in the public truly understanding the value of knowing about their community. . .  A lifeline for communities who have lost, or are in danger of losing, their local papers.” —Booklist

What happens when local news dies in a community? Versions of this disturbing story are happening everywhere in America, as ‘news deserts’ proliferate at a rapid pace. But the societal consequences are still not well understood. This troubling story is well told by Andrew Conte in Death of th​e Daily News, a searching and deeply reported look at what happened after the newspaper in McKeesport, Pennsylvania, went under in 2015. A longtime reporter with deep experience in local and national news, Conte approaches his subject perceptively and with empathy, even as he sounds the alarm about communities increasingly in trouble. This is a powerful, wise, and worthwhile study of a crucial topic. -- Margaret Sullivan, media columnist for the Washington Post and author of Ghosting the News: Local Journalism and the Crisis of American Democracy

Death of the Daily News: How Citizen Gatekeepers Can Save Local Journalism (Hardcover)