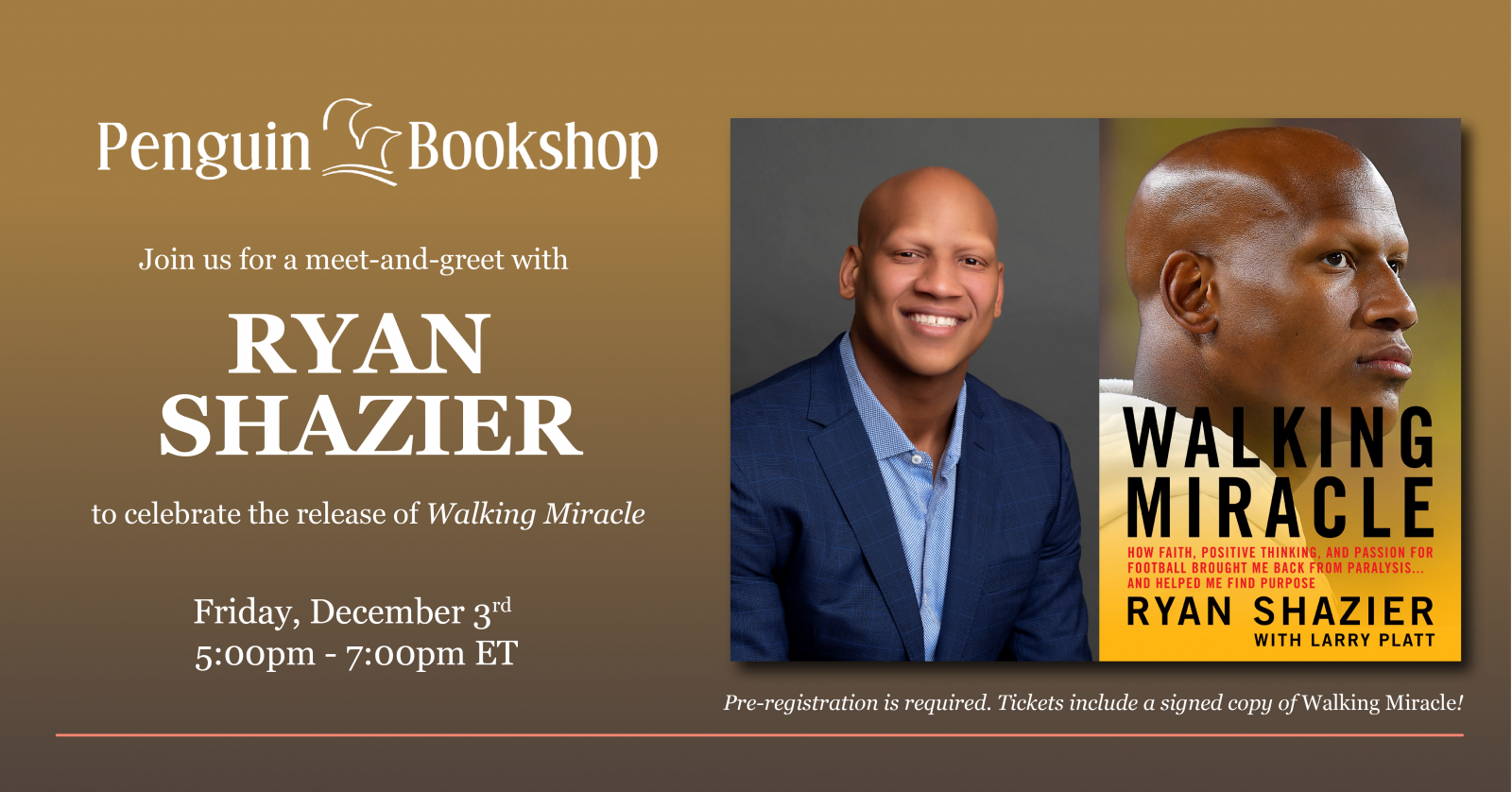 Nearly four years after an errant tackle left him paralyzed below the waist, former Pittsburgh Steeler Ryan Shazier shares the inspiring comeback story of how he recovered and learned to walk again.

WALKING MIRACLE: How Faith, Positive Thinking, and Passion for Football Brought Me Back from Paralysis...and Helped Me Find Purpose

We are so excited to host Ryan Shazier for a special in-store appearance to celebrate the release of his book, Walking Miracle. Attendees will receive a pre-signed copy of Walking Miracle and an opportunity to meet and get their photo taken with Ryan.

Pre-registration is required in order to guarantee your signed book and photo opportunity. Timed tickets will be available in 15-minute increments to allow for social distancing and to minimize crowds. Masks will be required to enter the store and must be worn at all times (including during the for photo opportunity).

A portion of the proceeds will be going to the Ryan Shazier Fund for Spinal Rehabilitation.

Ryan Shazier was a two time All Pro Linebacker for the Pittsburgh Steelers. Before that he was an All American at Ohio State. Since retiring from the Steelers, Shazier has joined The Ringer podcast network, hosting a weekly football show and regularly appearing on Bill Simmons's podcast. A documentary about his life is being filmed. He lives in Pittsburgh with his wife and two sons.

Larry Platt is the co-author of several books, including Stuart Scott's posthumous bestseller.

Walking Miracle is the story of this new definition of success, following the arc from December 4, 2017, when Shazier was injured playing the Cincinnati Bengals, to his retirement. For three years, Shazier doggedly pursued a return to professional football. He took small wins as “first downs” on the drive to return to the field: moving his toes, walking, dancing at his wedding, and ultimately running and returning to the team. What Shazier didn’t realize is that along the way, he was preparing himself for another purpose—that of father and husband, philanthropist, and football analyst. The journey was preparing him not for a renewed life as a middle linebacker, but a renewed life after the game.

Here we see Shazier overcome childhood alopecia, which caused a great deal of emotional pain, and scoliosis, which nearly robbed him of his dreams of playing college and professional football. We gain insights into legendary coaches Urban Meyer and Mike Tomlin. And we see him star on the field. Shazier was one of the best defensive players in Steeler history—a history full of great defensive stars.

WALKING MIRACLE—the message on a bracelet given to him by his godmother—is the story of Ryan’s comeback, but it’s also a book of life’s lessons, challenges, and a love letter to the power of positive thinking.

Walking Miracle: How Faith, Positive Thinking, and Passion for Football Brought Me Back from Paralysis...and Helped Me Find Purpose (Hardcover)