Kristin Harmel, and her upcoming novel THE WINEMAKER’S WIFE 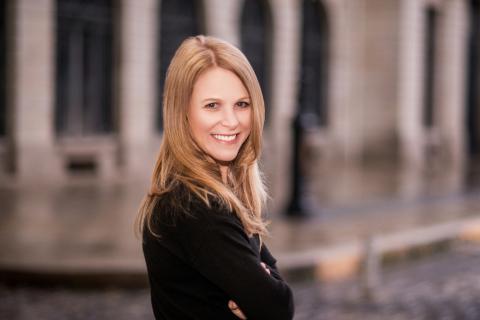 “Love and betrayal, forgiveness and redemption combine in a heady tale of the ever-present past...fantastic!”

Start chilling a bottle of bubbly as international bestselling author Kristin Harmel
takes you on a journey to the historic champagne caves of France...

Last year author Kristin Harmel moved readers with the rich historical drama and
emotional depth of her 2018 release, The Room on Rue Amelie. Traveling back
once again to France, she pens another unforgettable and propulsive story of
World War II with THE WINEMAKER’S WIFE (Gallery Books; Hardcover; August
13, 2019).

Hidden deep in the champagne caves near Reims lie some of the most precious
vintages France has ever produced, but the walls are haunted by the stories and
secrets from one of history’s most tragic eras.

In 1939, when Inès married her husband Michel, the owner of prestigious champagne house Maison Chauveau, it
was supposed to be a fairy tale filled with nights sipping bubbly. Instead, she finds herself isolated and lonely, not
even connecting with Céline, the wife of the chef de cave. But when the Germans invade and the danger mounts,
Michel turns his back on his marriage to begin hiding munitions for the Résistance while Inès is left with the fear
that they’ll be exposed.

The risk is even greater for half-Jewish Céline as rumors abound of Jews being shipped east to an unspeakable
fate. In a desperate bid for happiness, she recklessly follows her heart while Inès makes a dangerous mistake with
a Nazi collaborator. With one decision, they risk their lives for those they love and the champagne house that ties
them together.

In the present day, Liv Kent has just lost everything when her eccentric French grandmother shows up
unannounced, insisting that Liv accompany her on a trip to France. But she has an ulterior motive— and a tragic,
decades-old story to share. As Liv beings to uncover long-buried family secrets, she finds herself on a road to
salvation that leads right to the caves of the Maison Chauveau.

Written with emotional power and full of fascinating historical detail, THE WINEMAKER’S WIFE examines how the
decisions we make in a moment can change our lives. We hope you’ll consider this heartfelt and rewarding new
novel for prominent coverage this summer.