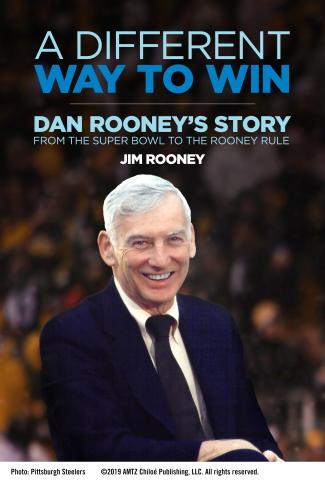 Dan Rooney was one of the most influential sports executives of his generation, the man who transformed the Pittsburgh Steelers into one of the National Football League’s great dynasties and premiere franchises. Some of his most important achievements, however, took place off the playing field as he sought to bring about equity in the league’s hiring practices and peace in his ancestral homeland of Ireland. As a business leader, a philanthropist, a diplomat and the author of the famous Rooney Rule, Dan Rooney was known for his core values, his quiet strength, his effectiveness, and his willingness to talk to and hear from those who disagreed with him.

In this poignant account of his father’s life, Jim Rooney takes readers behind the scenes to share stories from his hundreds of hours of interviews with business and political leaders; sports and celebrity influencers; and family members. Part memoir, part business biography, part history book, A Different Way to Win underscores the importance of focusing on the long game and the effectiveness in building consensus in a way that is meaningful and sustainable for decades to come.

Jim Rooney, one of Dan and Patricia Rooney's nine children, worked alongside his father for decades. Jim's personal and professional view of his father's long career comes from having assisted his father with relationships at the State Department and the White House during Dan's time serving as Ambassador to Ireland and, also, being involved in the football enterprise and support of the Rooney Rule.

In addition to being an author, Jim is a business owner, consultant, facilitator and national speaker.

He is co-partner of Rooney Consulting, which assists organizations with enhancing culture, building strong teams and growing businesses.

He has launched, led and developed several initiatives, working across the academic, government and technology sectors. He has advised on projects for the U.S. Federal Government; several foreign governments; corporations such as Henry Ford Health Systems, BNY Mellon, Koppers; and the University of Pittsburgh, University of Cincinnati and University of Miami.

Jim holds an Organizational Consulting certificate from Georgetown University and a B.A. in Political Science and Communications from Boston College. Additionally, he serves on the Board of Directors for the Jewish Healthcare Foundation of Pittsburgh, The American Ireland Funds and Gilmour Academy.

A Different Way to Win: Dan Rooney's Story from the Super Bowl to the Rooney Rule (Hardcover)