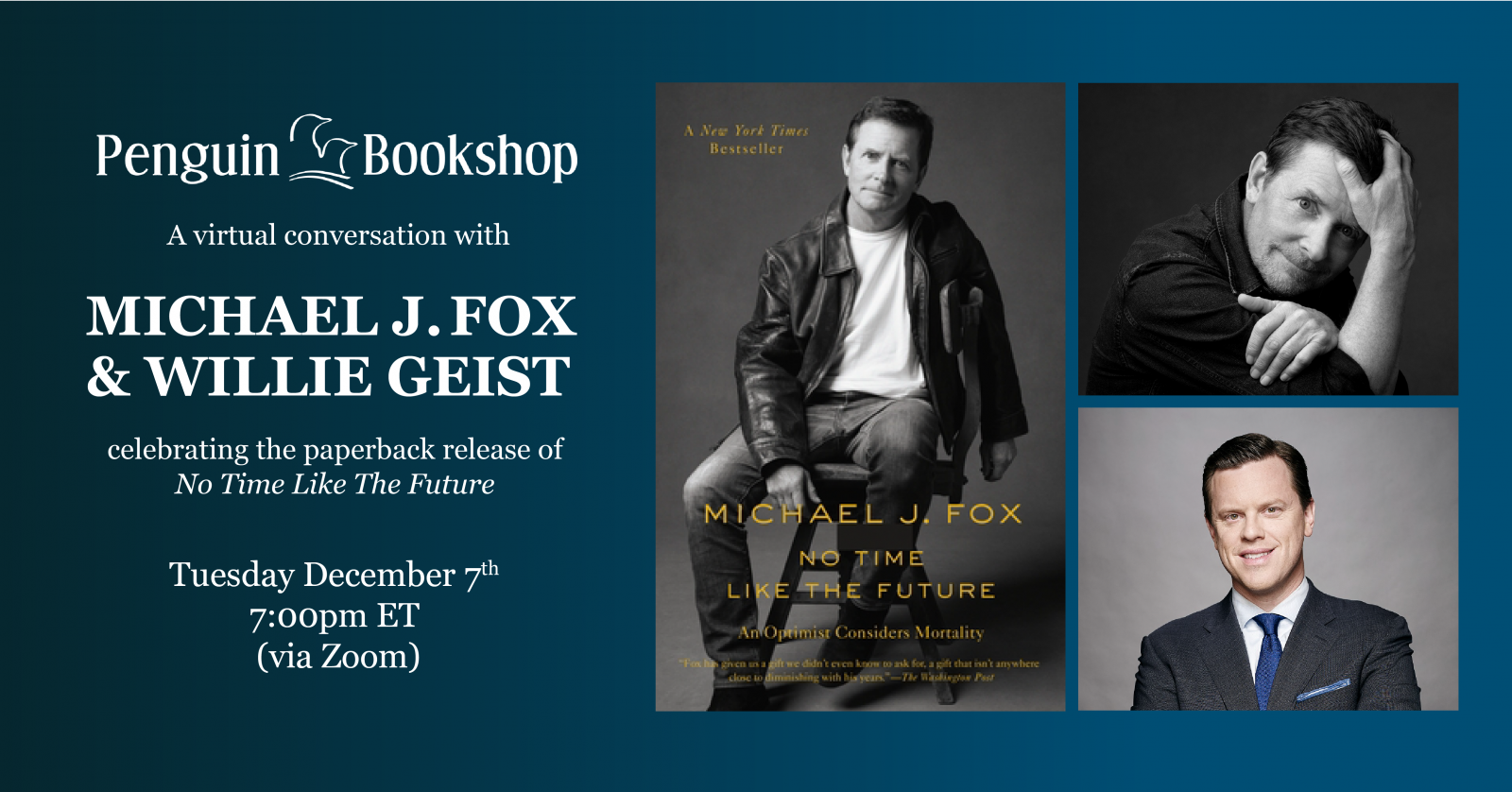 A Conversation with
Michael J. Fox & Willie Geist
celebrating the paperback launch of
No Time Like the Future

Flatiron Books is honored to launch the paperback release of Michael J. Fox’s New York Times bestselling memoir No Time Like the Future. To celebrate the new edition, Michael will be in conversation with journalist Willie Geist, anchor of NBC’s Sunday TODAY and co-anchor of MSNBC’s Morning Joe. The only paperback event for No Time Like The Future, the pre-recorded conversation will air on December 7th at 7pm ET via Zoom Webinar.

Pre-registration is required, and the link to register for the Zoom event will be sent in your confirmation email.

Michael J. Fox gained fame playing Alex P. Keaton on the sitcom Family Ties. His blockbuster movies include Back to the Future, The Secret of My Success, Doc Hollywood, Casualties of War and The American President. He returned to television in his award-winning lead role on Spin City, followed by guest appearances in series like Rescue Me, Curb Your Enthusiasm, and The Good Wife. His many awards include five Emmys, four Golden Globes, one Grammy, two Screen Actors Guild awards, the People’s Choice award, and GQ Man of the Year. In 2000, he launched the Michael J. Fox Foundation for Parkinson’s Research, which is now the leading Parkinson’s organization in the world. He is the author of three previous New York Times bestselling books: Lucky Man, Always Looking Up, and A Funny Thing Happened on the Way to the Future. Michael lives with his family in New York City.

Willie Geist is the host of NBC News’ Sunday TODAY with Willie Geist. He is also a co-host of MSNBC’s Morning Joe and a regular host and contributor to TODAY. Geist also contributes to the NBC Sports Group, where he hosted coverage of several Olympic Games. Geist is the author of three books, including the New York Times bestsellers Good Talk, Dad and American Freak Show. He lives in New York with his wife and their two children. Geist is on Twitter at @WillieGeist

A moving account of resilience, hope, fear and mortality, and how these things resonate in our lives, by actor and advocate Michael J. Fox.
The entire world knows Michael J. Fox as Marty McFly, the teenage sidekick of Doc Brown in Back to the Future; as Alex P. Keaton in Family Ties; as Mike Flaherty in Spin City; and through numerous other movie roles and guest appearances on shows such as The Good Wife and Curb Your Enthusiasm. Diagnosed at age 29, Michael is equally engaged in Parkinson’s advocacy work, raising global awareness of the disease and helping find a cure through The Michael J. Fox Foundation for Parkinson’s Research, the world’s leading non-profit funder of PD science. His two previous bestselling memoirs, Lucky Man and Always Looking Up, dealt with how he came to terms with the illness, all the while exhibiting his iconic optimism. His new memoir reassesses this outlook, as events in the past decade presented additional challenges.

No Time Like the Future: An Optimist Considers Mortality (Paperback)