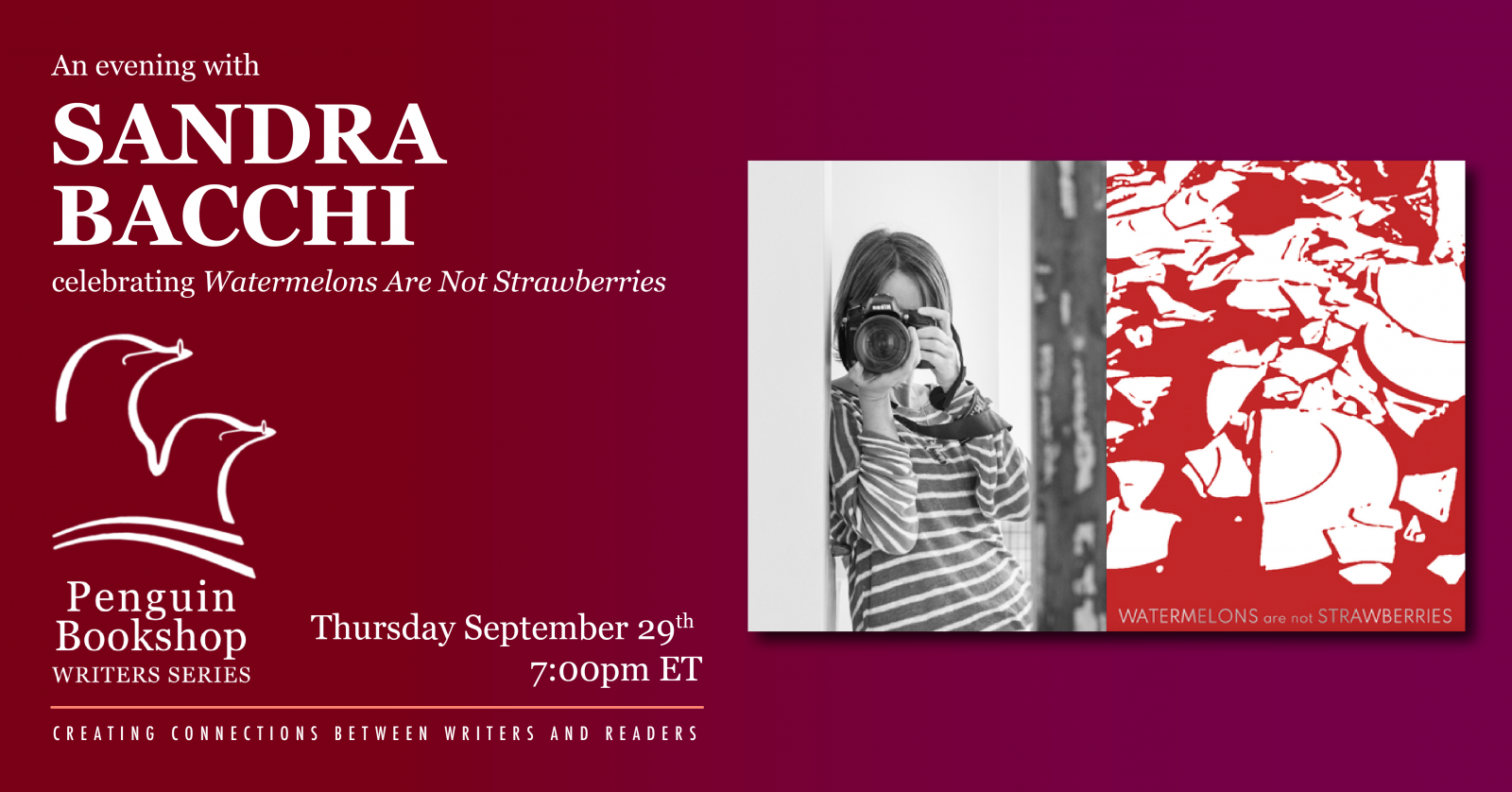 We are delighted to host local artist and author, Sandra Bacchi, for an event celebrating her latest book, Watermelons Are Not Strawberries! Sandra will be signing copies, and will engage guests with a conversation about the book, too.

Sandra Bacchi is a Brazilian visual artist based in Pittsburgh, PA. She blends documentary and conceptual photography with her cinematography background to tell her stories, weaving fiction into the truths to express more open-ended storytelling. Since 2019, Bacchi has been developing works with glass to create three-dimensional objects, integrating texture, color, and density to her photograph's two-dimensional aspect.

Bacchi’s main focus is to inquire about how human beings interact with each other and how we can find similarities among ourselves. Bacchi sees the world and its people as a combination of layers. Each person brings different layers to their complex relationships. Ancestors, family history, and life experiences create the layers within each person. In that sense, Sandra believes that when we take the time to value others' differences, we are more open to exposing the differences in ourselves and living a more full and expressed life.

Earning a degree in photography at Escola Panamericana de Artes (São Paulo, Brazil -1997), Sandra turned her focus to cinematography, working on short films, documentaries, and commercials, in São Paulo and New York. In 2001, Bacchi attended the Hungarian International Cinematography Workshop, taught by Academy Award winner Vilmos Zsigmond and Laszlo Kovacs. Between 2002 and 2012, Sandra was the executive producer and owner of the video production company Estação 8, based in São Paulo, Brazil.  In 2012, Sandra moved to NYC with her family and returned to her photography roots at the International Center of Photography.

Since 2016, Bacchi's work has been in exhibitions national and international, including shows at Pittsburgh Glass Center, Griffin Museum of Photography, and Houston Center for Photography, and reviewed in publications, including LensCratch, A Curator, and Don't Take Picture. In addition, Bacchi has attended several portfolio reviews, including the 2018 Review Santa Fe. In 2020, she co-founded the Transforme Seu Olhar (To See Beyond), a live and online experience that uses emotional intelligence and photography to broaden the participant's creative repertoire. Bacchi is a Critical Mass 2021 top 200 finalist, a member of the Associated Artists of Pittsburgh, and a Pittsburgh Glass Center board member, and her short film Seeking Nowhere was screened during the Glass, Meet the Future 2021 Film Festival at the Museum of Arts and Design in New York. In 2022, Bacchi’s Watermelons Are Not Strawberries series will be published as a photobook by Yoffy Press, with an essay by Sarah Kennel.

ABOUT WATERMELONS ARE NOT STRAWBERRIES

Watermelons are Not Strawberries was created based on the photo essay with the same name, in which i portray my inner transformation and pursuit of self-awareness while navigating the challenges related to parenting.  The photographs are a blend of conceptual and documentary photography that reveals the shapes, textures, and shadows of my love for motherhood as it merges with a lifetime of my personal anxiety. Over six years, the work grew into a story of resilience, hope, and mutual support between my daughters and me. In this creative process, i found the strength to heal old wounds by examining universal emotions such as sadness, happiness, and love.

These photographs have toured the world in exhibitions, publications, and relevant portfolio reviews. Now, the series will be materialized into a physical object that can be touched and shared. It is an invitation to navigate through a visual narrative in an intimate and sensory experience.

Watermelons Are Not Strawberries (Hardcover)