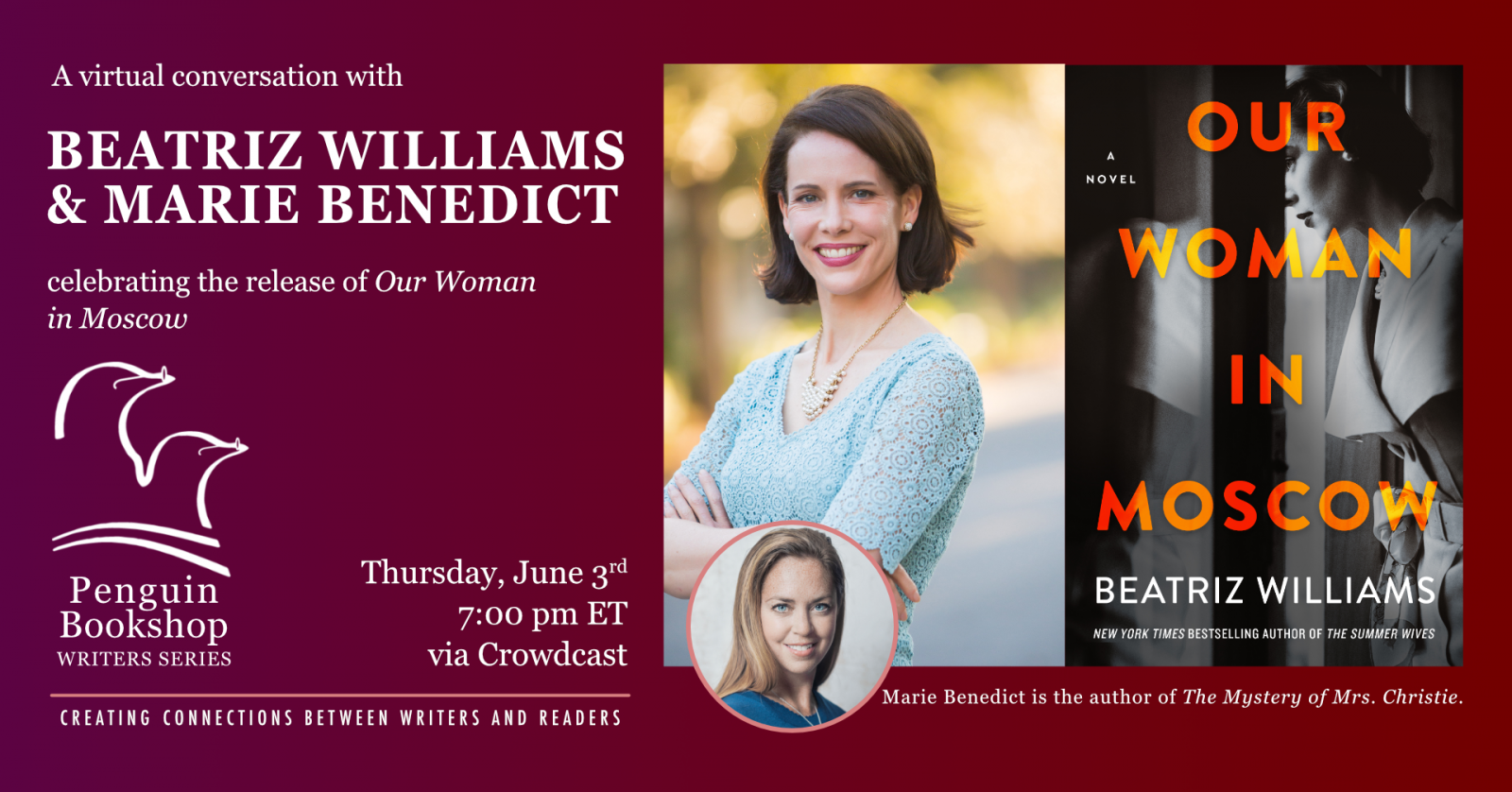 Join bestselling authors Beatriz Williams and Marie Benedict for a very special virtual event celebrating the release of Williams' Our Woman in Moscow.  The evening will include the authors' conversation about the book, as well as a Q&A with the audience and some trivia to boot! The event will last approximately an hour and will be held via Crowdcast.

This is a ticketed event, and advance registration through EVENTBRITE is required. Tickets include a copy of Our Woman in Moscow. Tickets range $28-33, depending on shipping.

Beatriz Williams is the bestselling author of thirteen novels, including Her Last Flight, The Summer Wives, and The Golden Hour, as well as All the Ways We Said Goodbye, cowritten with Lauren Willig and Karen White. A native of Seattle, she graduated from Stanford University and earned an MBA in finance from Columbia University. She lives with her husband and four children near the Connecticut shore, where she divides her time between writing and laundry.

Marie Benedict is a lawyer with more than ten years' experience as a litigator at two of the country's premier law firms, who found her calling unearthing the hidden historical stories of women. Her mission is to excavate from the past the most important, complex and fascinating women of history and bring them into the light of present-day where we can finally perceive the breadth of their contributions as well as the insights they bring to modern day issues. Her new novel, The Mystery of Mrs. Christie, is a New York Times and USA Today bestseller.

ABOUT OUR WOMAN IN MOSCOW

The New York Times bestselling author of Her Last Flight returns with a gripping and profoundly human story of Cold War espionage and family devotion.

In the autumn of 1948, Iris Digby vanishes from her London home with her American diplomat husband and their two children. The world is shocked by the family’s sensational disappearance. Were they eliminated by the Soviet intelligence service? Or have the Digbys defected to Moscow with a trove of the West’s most vital secrets?

Four years later, Ruth Macallister receives a postcard from the twin sister she hasn’t seen since their catastrophic parting in Rome in the summer of 1940, as war engulfed the continent and Iris fell desperately in love with an enigmatic United States Embassy official named Sasha Digby. Within days, Ruth is on her way to Moscow, posing as the wife of counterintelligence agent Sumner Fox in a precarious plot to extract the Digbys from behind the Iron Curtain.

But the complex truth behind Iris’s marriage defies Ruth’s understanding, and as the sisters race toward safety, a dogged Soviet KGB officer forces them to make a heartbreaking choice between two irreconcilable loyalties.

ADVANCE PRAISE FOR OUR WOMAN IN MOSCOW

Named one of the “Most Anticipated Historical Fiction Novels of Summer” at BUZZFEED & SHEREADS!

“[Williams] expertly shifts between family drama and a suspenseful espionage plot, and makes every word and note count. Fans of Kate Quinn and Pam Jenoff will be looking for this one.” —Library Journal, STARRED review

“Williams again blends historical fiction and romance in this engaging tale of Cold War espionage… Williams, effectively juggling the narrative between the points of view of Ruth, Iris, and a Russian KGB agent, moves back and forth in time to build all the principals into full-bodied characters while delivering detail-rich portraits of wartime Italy, glittery fifties Manhattan, and grayed-out Moscow." —Booklist

“Williams captivates with the story of an American woman’s effort to reunite with her twin sister after her defection to the Soviet Union… Williams sharply observes the inequities women faced at the end of WWII and the simmering suspense of the Cold War. Historical fiction fans will be riveted by the complex family relationships and the intriguing portrayal of espionage.” —Publishers Weekly

“This is Williams at the top of her game. She handles multiple points of view brilliantly, and the propulsive plot doesn’t get in the way of her ability to make the inner lives of her heroines vivid and realistic. The balance between glamour and grit, humor and heartbreak are perfect, making this is an entertaining adventure for romance and spy-thriller fans alike.”  —Historical Novel Society

Our Woman in Moscow: A Novel (Hardcover)