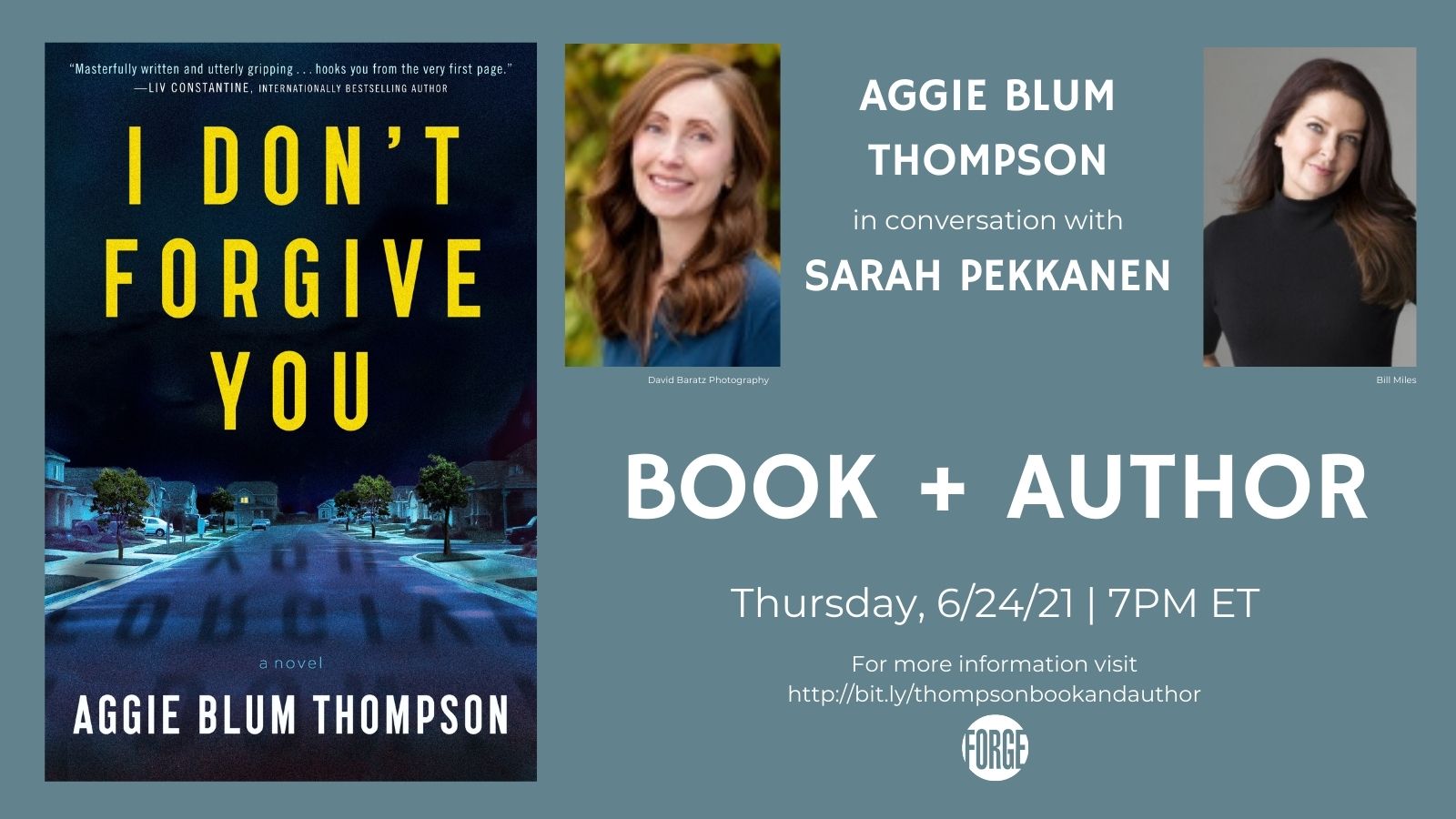 Come join us! Sign up to participate in the next event in Macmillan’s Book + Author series: a virtual book club event with debut author Aggie Blum Thompson for the release of her page-turning thriller, I Don’t Forgive You. We've partnered with Macmillan to bring this opportunity to book club members across the country, who can tune in to hear a discussion with best-selling author Sarah Pekkanen and participate in the live Q&A. Register through the link below.

Before turning to fiction, AGGIE BLUM THOMPSON covered real-life crime as a newspaper reporter for a number of papers including The Boston Globe and The Washington Post. Aggie is a member of Sisters in Crime, Mystery Writers of America, and International Thriller Writers, and serves as the program director for the Montgomery County chapter of the Maryland Writers Association. For the past nine years, she's lived with her husband and two daughters in the suburbs of Washington D.C., which has afforded her a front-row view of suburban intrigues and helicopter-mom Olympics. I Don't Forgive You is her debut novel.

SARAH PEKKANEN is the bestselling author of The Ever After, The Opposite of Me, Skipping a Beat, These Girls, The Best of Us, Catching Air, Things You Won’t Say, and The Perfect Neighbors. Her work has been published in People, The Washington Post, and USA TODAY, among other publications. She lives with her family in Chevy Chase, Maryland.

ABOUT I DON'T FORGIVE YOU

Perfect for book clubs or the beach, Aggie Blum Thompson's I Don't Forgive You is a page-turning, thrilling debut "not to be missed." (Wendy Walker)

An accomplished photographer and the devoted mom of an adorable little boy, Allie Ross has just moved to an upscale DC suburb, the kind of place where parenting feels like a competitive sport. Allie’s desperate to make a good first impression. Then she’s framed for murder.

It all starts at a neighborhood party when a local dad corners Allie and calls her by an old, forgotten nickname from her dark past. The next day, he is found dead.

Soon, the police are knocking at her door, grilling her about a supposed Tinder relationship with the man, and pulling up texts between them. She learns quickly that she's been hacked and someone is impersonating her online. Her reputation—socially and professionally—is at stake; even her husband starts to doubt her. As the killer closes in, Allie must reach back into a past she vowed to forget in order to learn the shocking truth of who is destroying her life.

I Don't Forgive You (Hardcover)