AGATHA ARCH IS AFRAID OF EVERYTHING: VIRTUAL EVENT WITH KRISTIN BAIR 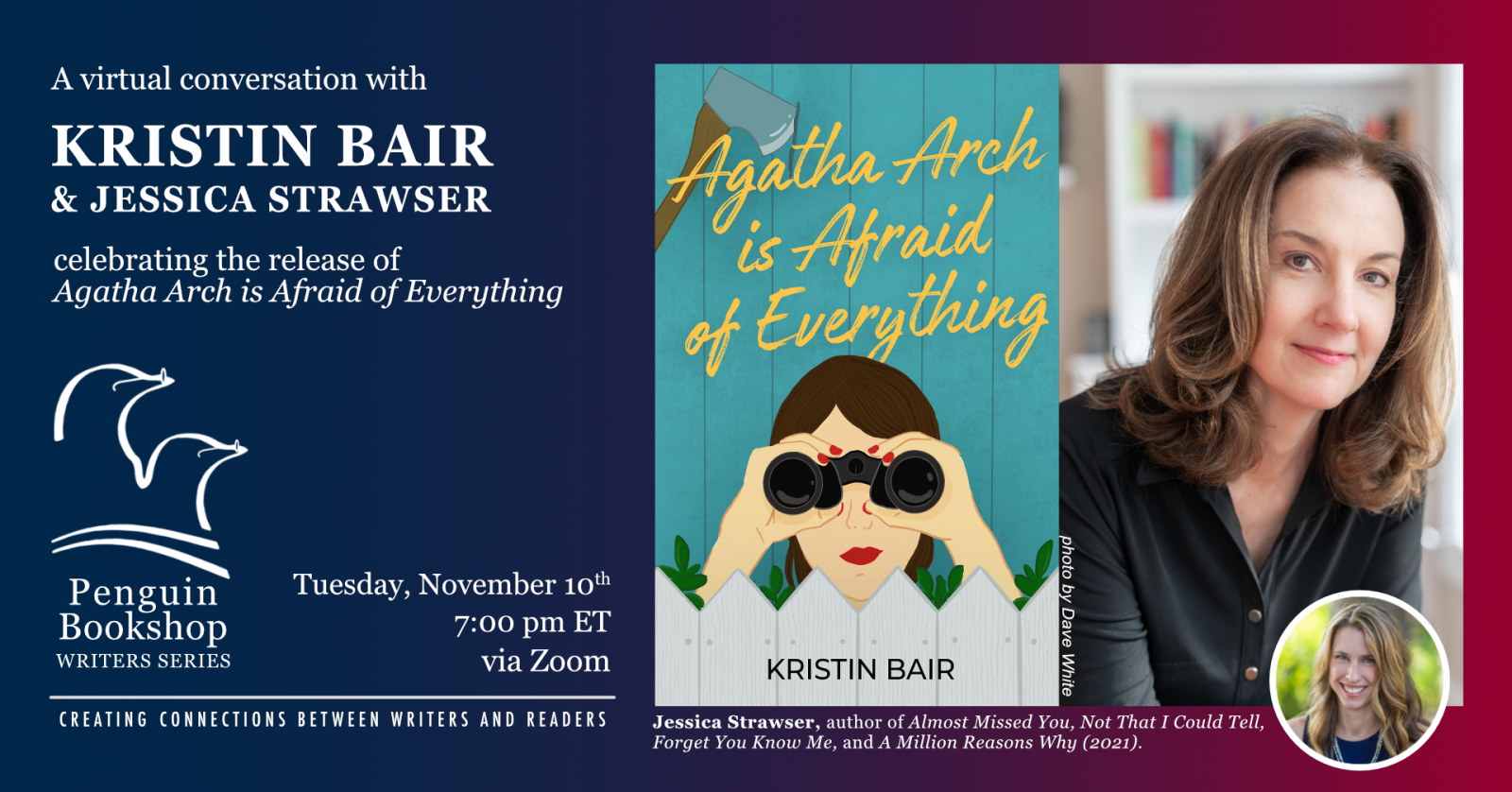 AGATHA ARCH IS AFRAID OF EVERYTHING

The Penguin Bookshop Writers Series will host Kristin Bair to celebrate the launch of her latest novel, Agatha Arch is Afraid of Everything. Kristin will be joined by fellow novelist Jessica Strawser for a conversation about the book. The conversation should last approximately one hour, and will conclude with a Q&A from the audience.  This event will be hosted virtually via ZOOM.

All you need to do to attend this event is pre-order a copy of Agatha Arch is Afraid of Everything! Anyone who pre-orders their copy from us before Monday, November 9th will automatically receive access to the launch. We will send out an email to all attendees the week before the launch with a Zoom link to attend.

Kristin Bair is the author of the novel Agatha Arch Is Afraid of Everything. Under the name Kristin Bair O’Keeffe, she has published two novels, The Art of Floating and Thirsty, as well as numerous essays about China, bears, adoption, off-the-plot expats, and more. Her work has appeared in The Gettysburg Review, The Baltimore Review, The Manifest-Station, Flying: Journal of Writing and Environment, The Christian Science Monitor, Poets & Writers Magazine, Writer’s Digest, and other publications.

Kristin has an MFA from Columbia College Chicago and a BA in English and journalism from Indiana University, Bloomington. As a speaker and writing instructor, her peripatetic nature has landed her in classrooms and conferences around the globe, from Chicago to Boston to Shanghai, China, and many places in between. A native Pittsburgher, Kristin now lives north of Boston with her husband and two kiddos. Follow her on Twitter and Instagram: @kbairokeeffe.

Jessica Strawser is the editor-at-large at Writer’s Digest, where she served as editorial director for nearly a decade and became known for her in-depth cover interviews with such luminaries as David Sedaris and Alice Walker. She’s the author of the book club favorites Almost Missed You, a Barnes & Noble Best New Fiction pick; Not That I Could Tell, a Book of the Month bestseller; and her latest, Forget You Know Me, now new in paperback. Her fourth novel, A Million Reasons Why, is coming in March 2021 (all from St. Martin’s Press).

ABOUT AGATHA ARCH IS AFRAID OF EVERYTHING

A quirky, nervous wreck of a New England mom is forced to face her many fears in this touching, irresistible novel from author Kristin Bair.

Agatha Arch's life shatters when she discovers her husband in their backyard shed, in flagrante delicto, giving the local dog walker some heavy petting. Suddenly, Agatha finds herself face to face with everything that frightens her...and that's a loooooong list.

Agatha keeps those she loves close. Everyone else, she keeps as far away as possible. So she's a mystery to nearly everyone in her New England town. To her husband, she's a saucy, no-B.S. writer. To her Facebook Moms group, she's a provocateur. To her neighbor, she's a standoffish pain in the butt. To her sons, she's chocolate pudding with marshmallows. And to her shrink, she's a bundle of nerves on the brink of a cataclysmic implosion.

Defying her abundant assortment of anxieties, Agatha dons her "spy pants"--a pair of khakis whose many pockets she crams with binoculars, fishing line, scissors, flashlight, a Leatherman Super Tool 300 EOD, candy, and other espionage essentials--and sets out to spy on her husband and the dog walker. Along the way, she finds another intriguing target to follow: a mysterious young woman who's panhandling on the busiest street in town.

It's all a bit much for timorous Agatha. But with the help of her Bear Grylls bobblehead, a trio of goats, and a dog named Balderdash, Agatha may just find the courage to build a better life.

Agatha Arch is Afraid of Everything: A Novel (Paperback)