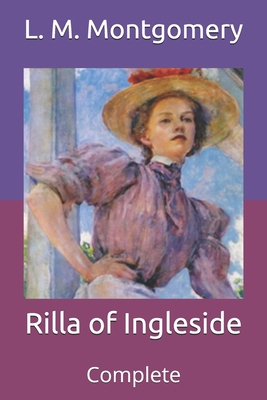 Outside, the Ingleside lawn was full of golden pools of sunshine and plots of alluring shadows.Rilla Blythe was swinging in the hammock under the big Scotch pine, Gertrude Oliver sat at its rootsbeside her, and Walter was stretched at full length on the grass, lost in a romance of chivalry whereinold heroes and beauties of dead and gone centuries lived vividly again for him.Rilla was the "baby" of the Blythe family and was in a chronic state of secret indignation becausenobody believed she was grown up. She was so nearly fifteen that she called herself that, and shewas quite as tall as Di and Nan; also, she was nearly as pretty as Susan believed her to be. She hadgreat, dreamy, hazel eyes, a milky skin dappled with little golden freckles, and delicately archedeyebrows, giving her a demure, questioning look which made people, especially lads in their teens, want to answer it. Her hair was ripely, ruddily brown and a little dent in her upper lip looked as ifsome good fairy had pressed it in with her finger at Rilla's christening. Rilla, whose best friendscould not deny her share of vanity, thought her face would do very well, but worried over her figure, and wished her mother could be prevailed upon to let her wear longer dresses. She, who had beenso plump and roly-poly in the old Rainbow Valley days, was incredibly slim now, in the arms-andlegs period. Jem and Shirley harrowed her soul by calling her "Spider." Yet she somehow escapedawkwardness. There was something in her movements that made you think she never walked butalways danced. She had been much petted and was a wee bit spoiled, but still the general opinionwas that Rilla Blythe was a very sweet girl, even if she were not so clever as Nan and D.

All events will be held virtually until further notice.
END_OF_DOCUMENT_TOKEN_TO_BE_REPLACED