Anne of the Island (Paperback) 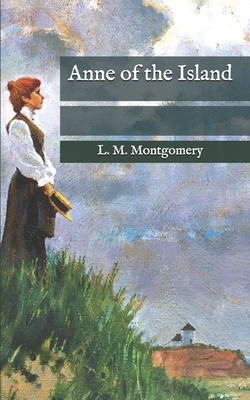 "Harvest is ended and summer is gone," quoted Anne Shirley, gazing across the shornfields dreamily. She and Diana Barry had been picking apples in the Green Gables orchard, but were now resting from their labors in a sunny corner, where airy fleets of thistledowndrifted by on the wings of a wind that was still summer-sweet with the incense of ferns inthe Haunted Wood.But everything in the landscape around them spoke of autumn. The sea was roaringhollowly in the distance, the fields were bare and sere, scarfed with golden rod, the brookvalley below Green Gables overflowed with asters of ethereal purple, and the Lake ofShining Waters was blue-blue-blue; not the changeful blue of spring, nor the pale azureof summer, but a clear, steadfast, serene blue, as if the water were past all moods andtenses of emotion and had settled down to a tranquility unbroken by fickle dreams."It has been a nice summer," said Diana, twisting the new ring on her left hand with asmile. "And Miss Lavendar's wedding seemed to come as a sort of crown to it. I suppose Mr.and Mrs. Irving are on the Pacific coast now.""It seems to me they have been gone long enough to go around the world," sighed Anne."I can't believe it is only a week since they were married. Everything has changed. MissLavendar and Mr. and Mrs. Allan gone-how lonely the manse looks with the shutters allclosed I went past it last night, and it made me feel as if everybody in it had died.""We'll never get another minister as nice as Mr. Allan," said Diana, with gloomyconviction. "I suppose we'll have all kinds of supplies this winter, and half the Sundays nopreaching at all. And you and Gilbert gone-it will be awfully dull.""Fred will be here," insinuated Anne slyly."When is Mrs. Lynde going to move up?" asked Diana, as if she had not heard Anne'sremark.

All events will be held virtually until further notice.
END_OF_DOCUMENT_TOKEN_TO_BE_REPLACED