Contributions of medieval Arab_muslim scientists to botany and agriculture (Paperback) 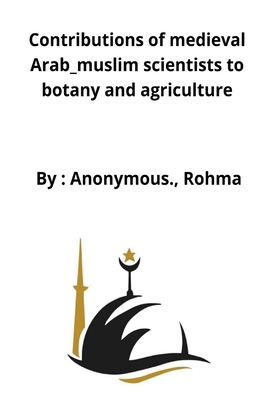 By Anonymous Rohma
$32.99
Email or call for price.

The Arabs and particularly the Muslims were greatly interested in almost all the fields of learning. This is evident from the remarkable contribution they made in every field of knowledge. Every civilization and culture has its golden age, likewise for the Arab Muslims the middle period i.e., 8* to 13* century was the golden period as it was in that period that they made splendid and remarkable achievements in almost all the major branches of learning especially life and exact sciences. They not only preserved and assimilated the intellectual legacy of the then civilized world, but also made original contributions in all branches of studies in arts, humanities and natural sciences. In the light of these Quranic injunctions regarding seeking of knowledge the Muslims were shrewd in making observations in natural phenomena created by Almighty Allah. Every other verse of the Quran directs the Muslims to seek knowledge by contemplating and observing the nature, the world around us and the creatures and also to search for the reasons and utility of all the creations. Even the traditions of Prophet Muhammad (s.a.w.) direct the Muslims to seek knowledge. Inspired by these teachings of Islam, the Arab Muslims made vast and original contributions by making researches and through their efforts and compositions. A number of Muslim scholars performed marvellous jobs either independently or under the patronage of their rulers. They started with the translations of scientific works of earlier civilizations like those of Greeks, Nabaeteans, and Indians etc. It was,

Events may be virtual or in person. Please see details for each event.
END_OF_DOCUMENT_TOKEN_TO_BE_REPLACED