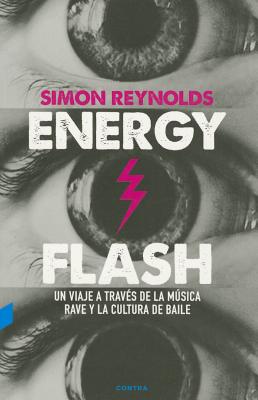 By Simon Reynolds
Email or call for price.
Out of Print

In his dual role of historian and participating observer, music critic and journalist Simon Reynolds writes what is considered by many to be both his most ambitious work and the best book about rave music and dance culture. From the origins of dance culture with sophisticated Detroit techno, hedonistic Chicago house, and New York’s bacchanal garage music to the dawn of acid house and rave in the United Kingdom in the late 1980s and the export of Balearic culture from Ibiza, Reynolds documents the explosion of this new lifestyle fueled by drugs and a music revolution. Detailed are some of the craziest and most unsettling movements: hardcore British Madchester, pirate radio, polyrhythmic jungle, Belgian gabber, trip-hop, trance, and postrave genres, including dubstep and EDM. The book contains interviews with some of the music scene’s most instrumental players, such as Juan Atkins, Carl Craig, DJ Shadow, Goldie, Richie Hawtin, Richard D. James of Aphex Twin, Derrick May, Jeff Mills, Paul Oakenfold, Tricky, and others. Some of the most extreme and hardcore music from the last 30 years is documented in this goldmine of underground treasure.

Simon Reynolds is a British music critic and journalist well known for his writings on electronic dance music. He has contributed to the Guardian, Melody Maker, the New York Times, Rolling Stone, Spin, and the Village Voice, among other publications. He is the author of Blissed Out: The Raptures of Rock, Bring the Noise: 20 Years of Writing about Hip Rock and Hip Hop, Retromania: Pop Culture’s Addiction to Its Own Past, Rip It Up and Start Again: Postpunk 1978–1984, and Totally Wired: Post-Punk Interviews and Overviews, and the coauthor of The Sex Revolts: Gender, Rebellion, and Rock ‘N’ Roll. He lives in Los Angeles.

“A revved-up, detailed, and passionate history and analysis of the throbbing transcontinental set of musics and cultures known as rave. . . . Reynolds mixes social history, interviews with participants and scene-makers, and his own analyses of the sounds, saturating his prose with the names of key places, tracks, groups, scenes, and artists.”  —Publishers Weekly, on the English-language edition

“A classic chronicle of the nineties rave movement.”  —Rolling Stone, on the English-language edition

“A neat history of a cultural anomaly.”  —Booklist, on the English-language edition

“An exceptional book. Reynolds has tracked the unfolding sounds and rituals of ‘the chemical generation’' so comprehensively that he virtually obviates the need for any further literature on the period.”  —Mojo, on the English-language edition

All events will be held virtually until further notice.
END_OF_DOCUMENT_TOKEN_TO_BE_REPLACED