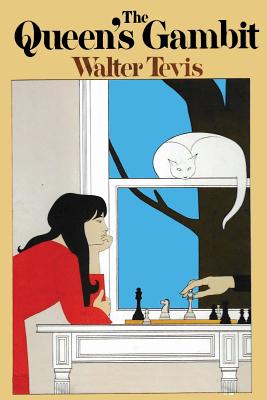 By Walter Tevis, Sam Sloan (Introduction by)
$22.94
Email or call for price.

There had never been a top ranked woman chess player. But suppose if an American girl were born with abilities in chess that matched the greatest players. What would happen to her in a highly competitive field dominated by men?

Starting from this premise, the author Walter Tevis, who some years ago interested a generation of Americans in straight pool with the book "The Hustler", has produced a riveting novel that makes chess more exciting than one could have imagined.

Orphaned at eight when both of her parents are killed in a car accident, Beth is sent to the Methuen Home. A frightened little girl, she survives on the tranquilizers the home doles out to make the children "easier to handle". She is sent to the basement to get chalkboard erasers and she finds players sitting with a checkerboard with strange little pieces on it. She is strangely fascinated and she keeps coming back to the basement to watch. She has learned the moves by herself and keeps coming to watch by a desire she hardly understands. She overcomes her shyness and a janitor teaches her the moves. From that moment on, although she does not at once realize it, her whole life has forever changed.

Eight year-old orphan Beth Harmon is quiet, sullen, and by all appearances unremarkable. That is until she plays her first game of chess. Her senses grow sharper, her thinking clearer, and for the first time in her life she feels herself fully in control. By the age of sixteen, she's competing for the U.S. Open championship. But as she hones her skills on the professional circuit, the stakes get higher, her isolation grows more frightening, and the thought of escape becomes all the more tempting. Engaging and fast-paced, The Queen's Gambit speeds to a conclusion as elegant and satisfying as a mate in four.

All events will be held virtually until further notice.
END_OF_DOCUMENT_TOKEN_TO_BE_REPLACED