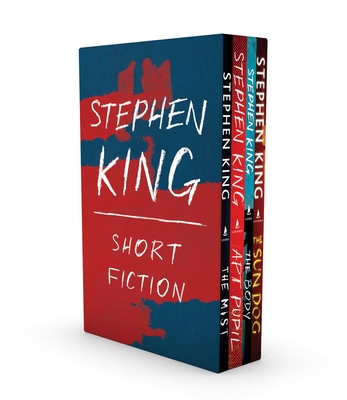 Now in one stunning collection, four of Stephen King’s most well-loved horror stories: The Mist, Apt Pupil, The Body, and The Sun Dog. Each standalone story is a riveting master class in short fiction from “the reigning King of American popular literature” (Los Angeles Daily News).

In The Mist, terror descends in the wake of a summer storm. David Drayton, his son Billy, and their neighbor Brent Norton join dozens of others and head to the local grocery store to replenish supplies and become trapped by a strange mist that has enveloped the town. As the confinement takes its toll on the group’s nerves, staying in the store may prove fatal—so, the Draytons, Brent, and a handful of other survivors attempt their escape. But what’s out there may be worse than what they left behind.​

Apt Pupil follows Todd Bowden, a top-performing student and all around “good kid” who learns his teacher, Mr. Dussander, is more than he seems. Turns out, Mr. Dussander is the target of a decades-old manhunt. He’s never been caught, and Todd doesn’t want to be the one to turn him in. Instead, Todd will face his fears and learn the real meaning of power—and the seductive lure of evil.

In The Body, it’s 1960 in the fictional town of Castle Rock, Maine, and a boy from a neighboring town has vanished. Twelve-year-old Gordie Lachance and his three friends set out on a quest to find his body along the railroad tracks. During the course of their journey, Gordie, Chris Chambers, Teddy Duchamp, and Vern Tessio come to terms with death and the harsh truths of growing up in this iconic, unforgettable, coming-of-age story that was also adapted in the 1986 film classic Stand by Me.

In The Sun Dog, Kevin Delavan receives the perfect gift for his fifteenth birthday: a Polaroid Sun 660. But no matter where Kevin Delevan aims the camera, it produces a photograph of an enormous, vicious dog. In each successive picture, the menacing creature draws nearer to the flat surface of the Polaroid film. When old Pop Merrill, the town’s sharpest trader, gets wind of this phenomenon, he envisions a way to profit from it. But the Sun Dog, a beast that shouldn’t exist at all, is a dangerous investment...

Stephen King is the author of more than sixty books, all of them worldwide bestsellers. His recent work includes Fairy Tale, Billy Summers, If It Bleeds, The Institute, Elevation, The Outsider, Sleeping Beauties (cowritten with his son Owen King), and the Bill Hodges trilogy: End of Watch, Finders Keepers, and Mr. Mercedes (an Edgar Award winner for Best Novel and a television series streaming on Peacock). His novel 11/22/63 was named a top ten book of 2011 by The New York Times Book Review and won the Los Angeles Times Book Prize for Mystery/Thriller. His epic works The Dark Tower, It, Pet Sematary, Doctor Sleep, and Firestarter are the basis for major motion pictures, with It now the highest-grossing horror film of all time. He is the recipient of the 2020 Audio Publishers Association Lifetime Achievement Award, the 2018 PEN America Literary Service Award, the 2014 National Medal of Arts, and the 2003 National Book Foundation Medal for Distinguished Contribution to American Letters. He lives in Bangor, Maine, with his wife, novelist Tabitha King.

All events will be held virtually until further notice.
END_OF_DOCUMENT_TOKEN_TO_BE_REPLACED