Sinatra and Me: In the Wee Small Hours (Hardcover) 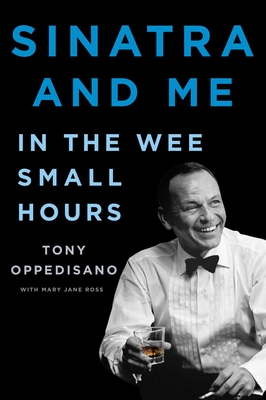 This intimate, revealing portrait of Frank Sinatra—from the man closest to the famous singer during the last decade of his life—features never-before-seen photos and new revelations about some of the most famous people of the past fifty years, including Jackie Kennedy, Marilyn Monroe, Sam Giancana, Madonna, and Bono. “If you are a Frank fan, buy this book” (Jimmy Kimmel).

More than a hundred books have been written about legendary crooner and actor Frank Sinatra. Every detail of his life seems to captivate: his career, his romantic relationships, his personality, his businesses, his style. But a hard-to-pin-down quality has always clung to him—a certain elusiveness that emerges again and again in retrospective depictions. Until now.

From Sinatra’s closest confidant and an eventual member of his management team, Tony Oppedisano, comes an extraordinarily intimate look at the singing idol that offers “new information on almost every page” (The Wall Street Journal). Deep into the night, for more than two thousand nights, Frank and Tony would converse—about music, family, friends, great loves, achievements and successes, failures and disappointments, the lives they’d led, the lives they wished they’d led. In these full-disclosure conversations, Sinatra spoke of his close yet complex relationship with his father, his conflicts with record companies, his carousing in Vegas, his love affairs with some of the most beautiful women of his era, his triumphs on some of the world’s biggest stages, his complicated relationships with his talented children, and, most important, his dedication to his craft.

Toward the end, no one was closer to the singer than Oppedisano, who kept his own rooms at the Sinatra residences for many years, often brokered difficult conversations between family members, and held the superstar entertainer’s hand when he drew his last breath.

“Frank Sinatra fans, pull up a chair and let longtime confidante and road manager Tony Oppedisano regale you with tales from the entertainer’s inner circle” (Parade magazine)—Sinatra and Me pulls back the curtain on a man whom history has, in many ways, gotten wrong.

Tony Oppedisano—a.k.a. “Tony O”—is a former professional musician and singer who went on to become an award-winning producer, served as a member of Frank Sinatra’s management team, and also managed comedian Don Rickles. Tony was only twenty-one when he first met and befriended Frank Sinatra. Tony later became the singer’s best friend and road manager, a contributor to two of Sinatra’s platinum albums, and a producer of the documentary To Be Frank: Sinatra at 100. Tony grew up in Brooklyn, New York, and currently lives in Los Angeles.

“There’s new information on almost every page…Frank fans will find plenty to cheer…A believable portrait of a towering 20th-century figure in the defiant December of his years.”
—Wall Street Journal

“There are many books about Sinatra but few, if any, written by someone who spent as much time with him as the legend Tony O. If you are a Frank fan, buy this book.”
—Jimmy Kimmel

“Tony Oppedisano enjoyed unrivaled access to the man many consider America’s greatest 20th-century entertainer [and] shares the tales with punch and panache….Late-in-life wisdom seeps through as Sinatra recounts regrets about leaving his first marriage, takes stock of who his true friends are and tries to keep his music career flourishing...Perhaps the most surprisingly interesting portion of the book may be Oppedisano sharing his own life story and details of first entering Sinatra’s orbit….Sinatra and Me may not set the record straight about every misconception of its title subject but not for lack of Oppedisano trying. That the results of such a quest prove so readable, human and sympathetic testifies to the writer’s powerful memory and singular life experiences.”
—Pittsburgh Post-Gazette

“An unblinking yet affectionate portrait of the singer in the October, November, and December of his years, and should appeal to diehards and rubberneckers alike.”
—Airmail

“An invaluable record…Sinatra and Me may leave readers longing for a friend like Frank; they'd be equally lucky to have one like Oppedisano. This tribute by Sinatra's much-younger best friend is like an Ol' Blue Eyes tune: sparkling, warm and emotionally true.”
—Shelf Awareness

“Oppedisano debuts with a remarkable look at the final years of one of the most influential musicians of the 20th century….This fascinating and intimate account stands out among the dozens of books written about the celebrated legend.”
—Publishers Weekly

“A fond remembrance of a deep friendship…Reveals a vulnerability in the Chairman of the Board that is often quite moving.”
—Booklist

“Everybody wanted to know Frank Sinatra; almost nobody really did. Tony Oppedisano really did…. Utterly clear-eyed yet truly loving, Sinatra and Me is a matchless portrait of a flawed, brilliant man—and of a great friendship. A gem of a book.”
—James Kaplan, bestselling author of The Voice and The Chairman

“What a great book!  Tony O. does here what many have tried to do without quite succeeding: he’s made Frank Sinatra accessible….Certainly, this is one of the very best of the Sinatra books and, I daresay, maybe the only one the man himself would actually read!”
—J. Randy Taraborrelli, New York Times bestselling author of Sinatra: Behind the Legend

“Tony O. was Frank Sinatra’s go-to guy, and in this affectionate and intimate memoir, he writes about the wee small hours with the love and even awe that the great singer evoked. ….Even veteran Frankophiles will enjoy the twice-told tales, the striking new ones, and the natural eloquence of heartfelt eulogy in Sinatra and Me.”
—David Lehman, author of Sinatra’s Century: One Hundred Notes on the Man and His World

"I knew and loved and dated and worshipped Frank Sinatra—he was like no one else—and I consider myself a very contented survivor. This book was one of the best trips I’ve ever had.  Tony captures the real Frank.  I think I’ll be reading Sinatra and Me over and over.”
—Angie Dickinson, star of more than 50 Hollywood films

“The legend that is Frank Sinatra remains a fascinating topic. Tony O. had a deep and abiding friendship with Ol' Blue Eyes and an all-access pass to his life.  We all are fortunate that he chose to share these intimate recollections with us.”
—Michael Bublé, four-time Grammy Award-winning recording artist

"Having a friendship like the one between Frank Sinatra and Tony O. was a true gift.  Believe me, Tony was there in the 'wee small hours of the morning.' Sinatra and Me is a wonderful book."
—Robert Wagner, star of It Takes a Thief and Hart to Hart

“Literally, my entire life has been intimately intertwined with America’s beloved ‘Rat Pack’—with my Uncle Frank as Chairman of the Board; my Dad, the King of Cool; and the amazing man I call Uncle Sammy….This book is definitely 'Dal Cuore'—from the heart. Tony captures not just Frank but Frank’s entire world….You’re in for an authentic treat.”
—Deana Martin, actress and Billboard Top 40 recording artist

“Frank Sinatra, never anything less than a riveting presence, was a man I was lucky enough to be around and get to know—but Tony O. knew him as few men know each other….This is a deeply intimate book, and well worth the read.”
—Tony Danza, star of Taxi and Who’s the Boss?

"If you knew Frank Sinatra you knew Tony Oppedisano.  The love, loyalty, respect, and friendship Tony showed Frank was infinite, and perhaps most important, wasn't just directed to the artist and legend but to the human being."
—Lorna Luft, actress, singer, and New York Times bestselling author of Me and My Shadows

"I loved Tony’s book.  It's fun and paints such a vivid picture of the times that I felt I'd actually just spent a weekend in Palm Springs with Frank…and still have a hangover."
—George Schlatter, former producer of the Grammy Awards and of Rowan and Martin's Laugh-In

All events will be held virtually until further notice.
END_OF_DOCUMENT_TOKEN_TO_BE_REPLACED