The Ballad of Laurel Springs (Hardcover) 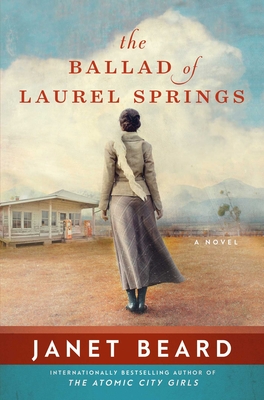 From the internationally bestselling author of The Atomic City Girls, a provocative novel set in eastern Tennessee that “explores the legacies—of passion and violence, music and faith—that haunt one family across the generations” (Jillian Medoff, author of This Could Hurt).

Ten-year-old Grace is in search of a subject for her fifth-grade history project when she learns that her four times-great grandfather once stabbed his lover to death. His grisly act was memorialized in a murder ballad, her aunt tells her, so it must be true. But the lessons of that revelation—to be careful of men and desire—are not just Grace’s to learn. Her family’s tangled past is part of a dark legacy in which the lives of generations of women are affected by the violence immortalized in folksongs like “Knoxville Girl” and “Pretty Polly” reminding them always to know their place—or risk the wages of sin.

Janet Beard’s stirring novel, informed by her love of these haunting ballads, vividly imagines these women, defined by the secrets they keep, the surprises they uncover, and the lurking sense of menace that follows them throughout their lives even as they try to make a safe place in the world for themselves. “This inspired story of Appalachian folklore” (Publishers Weekly) will move and rouse you.

Born and raised in East Tennessee, Janet Beard studied screenwriting at NYU and went on to earn an MFA in creative writing from The New School. She is the bestselling author of The Atomic City Girls and The Ballad of Laurel Springs. She currently lives in Columbus, Ohio.

"Lyrical, atmospheric and deeply moving, Janet Beard's new novel, The Ballad of Laurel Springs, explores the legacies—of passion and violence, music and faith--that haunt one family across the generations. A gifted storyteller, Beard brings her native East Tennessee to life with grace and empathy. This book is a stunner." —Jillian Medoff, author of This Could Hurt

"The Ballad of Laurel Springs sets the resonant violence of family secrets to the music of the mountains. With tenderness and grit, Janet Beard celebrates the harmonies of survival that run generations deep. Never has it felt more necessary—or more electric—for a story to be heard through song." —Amy Jo Burns, author of Cinderland and Shiner

"[A]n intriguing multigenerational saga of a family steeped in the old-time songs and stories of southern Appalachia. ...tinged with regret and loss, informed by the timeless lyricism of the songs, and culminating with a poignant revelation about Grace’s immediate family. This inspired story of Appalachian folklore will move readers." —Publishers Weekly

“With a sense of traveling through time, readers will enjoy the murder mystery, combined with the descriptions of daily life in [a] little Appalachian town. Fans of The Giver of Stars (2019), by Jojo Moyes, and historical fiction with strong female characters will want to give this book a try.” —Booklist

"When 10-year-old Grace learns that her four times-great grandfather once stabbed his lover to death—and that the killing was memorialized in a 'murder ballad'—her family’s history becomes linked to a long legacy in which generations of women are impacted by violence—violence then immortalized in folksongs that remind young girls where their place is. The Ballad of Laurel Springs is the story of women fighting to make a safe place for themselves, and the ballads that are sung along the way." —Country Living, "The 26 Best New Books for This Fall"

"Haunting and lyrical... immerses you in Appalachian folklore in a visceral way." —Buzzfeed

“For generations of women in a Tennessee family, the tune of an Appalachian ‘murder ballad’ resonates as a warning. Enriched with more than a century of Southern Appalachian history . . . Beard pairs a respect for the Tennessee women and their preservation of the haunting music with a poignant sorrow for their struggles. Fans of The Book Woman of Troublesome Creek and Serena will feel sympathy for the women in this heartfelt story with deep roots in American folklore . . . [A] haunting historic novel.” —Shelf Awareness

All events will be held virtually until further notice.
END_OF_DOCUMENT_TOKEN_TO_BE_REPLACED