What Were We Thinking: A Brief Intellectual History of the Trump Era (Paperback) 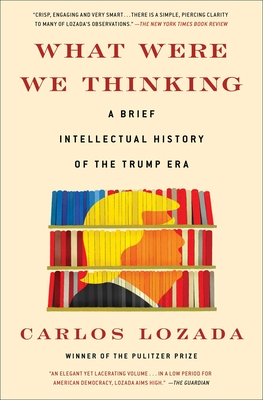 In this “crisp, engaging, and very smart” (The New York Times Book Review) work, The Washington Post’s Pulitzer Prize–winning book critic digs into books of the Trump era and finds that our response to this presidency often reflects the same polarization, contradictions, and resentments that made it possible.

It is an irony of our age that a man who rarely reads has unleashed an onslaught of books about his tenure and his time. Dissections of the white working class. Manifestos of political resistance. Works on identity, gender, and migration. Memoirs on race and protest. Revelations of White House mayhem. Warnings over the future of conservatism, progressivism, and of American democracy itself.

As a book critic for The Washington Post, Carlos Lozada has read just about all of them. In What Were We Thinking, he draws on some 150 recent volumes to explore how we understand ourselves in the Trump era. Lozada’s characters are not the president, his advisers, or his antagonists but the political and cultural ideas at play—and at stake—in America.

Just as Trump’s election upended the country’s political establishment, it shocked its intellectual class. Though some of the books of the Trump era skillfully illuminate the challenges and transformations the nation faces, too many works are more defensive than incisive, more righteous than right. Lozada offers a provocative argument: Whether written by liberals or conservatives, activists or academics, true believers or harsh critics, the books of Trump’s America are vulnerable to the same failures of imagination that gave us this presidency in the first place.

In What Were We Thinking, Lozada’s selections range from bestselling titles to little-known works, from thoroughly reported accounts of the administration to partisan polemics, from meditations on the fate of truth to memoirs about enduring—or enabling—the Trump presidency. He also identifies books that challenge entrenched assumptions and shift our vantage points, the books that best help us make sense of this era.

The result is an “elegant yet lacerating” (The Guardian) intellectual history of our time, a work that transcends daily headlines to discern how we got here and how we thought here. What Were We Thinking will help today’s readers understand America, and will help tomorrow’s readers look back and understand us.

Carlos Lozada is the nonfiction book critic of The Washington Post and winner of the 2019 Pulitzer Prize for criticism.

“What Were We Thinking is crisp, engaging and very smart...There is a simple, piercing clarity to many of Lozada's observations.” —New York Times Book Review

"A book that solemnly analyses 150 often trashy books about someone who is not known to have read a single book and hired stooges to write the 20 self-puffing volumes published in his name? Yes, Carlos Lozada’s survey of what he archly calls 'Trump Studies' is all of those paradoxical things and it is an utter marvel: sober though frequently very funny, fairer minded than the subject deserves, in the end profoundly troubling even as it looks ahead to America’s recovery from the Trump malaise.” — The Guardian

"An elegant yet lacerating volume... In a low period for American democracy, Lozada aims high" — The Guardian

"The meta Trump book you didn't know you wanted (and needed) to read... Lozada’s book is in conversation with the best books he touches on, by authors like Jill Lepore and Timothy Snyder, drawing out an American narrative that encompasses all its complexity and unmet promise." —The Los Angeles Times

“A Rosetta Stone for anyone trying to make sense of the last few years of public debate and discourse.” –Vanity Fair

"Lozada has written the ultimate hot take on the Trump era of American politics. Unquestionably, the years ahead will be filled with history books about the Trump legacy, but for right now, leaders would be smart to start with this book." — Forbes

“Probably the best book about the Trump presidency so far is Carlos Lozada’s What Were We Thinking, in which the author, The Washington Post’s excellent book critic, read 150 books written during the Trump years and analyzed what their perspectives told us about the man and his time in the White House. His conclusions, and I share them, are that in essence the Trump presidency was uniquely chaotic and yet at the same time a reflection of deeply embedded characteristics of American society." — Peter Osnos

"A fine reduction of complexity that serves any interested reader as a compass, enabling them to navigate through the rough seas of recent American politics... The strength of this book lies in the fact that it questions taken-for-granted assumptions and catch-all, simplistic conceptualisations such as 'neoliberalism', 'populism' and even 'fascism'. Instead the author reads between the lines. He detects not only some finer points that often get lost in the noise of all the scandals but also sees in the Trump administration a kind of dialectic between continuity and rupture."— Dublin Review of Books

“Lozada is. . . one of the rising stars in Washington's cultural, political, and journalistic world, which he knows and describes with depth and finesse. His book is not just an editorial guide to the Trump era, but a lucid analysis of the time in which we live. Its usefulness, therefore, transcends the limits of American democracy.” — El País

"A nimble overview of the library of Trumpiana" —Kirkus Review

"Kudos to Carlos Lozada for his wide-ranging survey of the many books written about the Trump era. Being able to digest more than 150 books on this topic is itself a literary feat, but he managed to write with a degree of objectivity most of us find difficult to attain during this conflicted time." — Letter to the editor, The Washington Post

"No matter who wins in November, 'What were we thinking?' will be a pertinent question for years." — Washingtonian Magazine

"Lozada highlights where these books succeed and where they fail, providing a comprehensive perspective on contemporary America." — Book Trib

All events will be held virtually until further notice.
END_OF_DOCUMENT_TOKEN_TO_BE_REPLACED