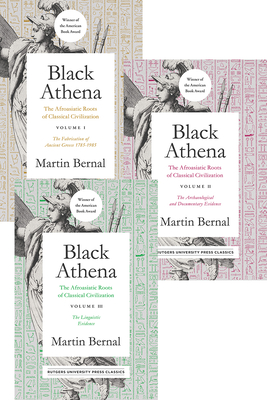 This is a complete set of all three volumes, shrink-wrapped.

"A monumental and path-breaking work."

"Black Athena is a powerfully written and brilliantly researched book that relentlessly unveils the historical and cultural African origins of Western civilization. Still a must read for all those in search of truth."

"In a spectacular undertaking, Martin Bernal sets out to... restore the credibility of what he calls the Ancient Model of the beginnings of Greek civilizations... Bernal makes an exotic interloper in Classical studies. He comes to them with two outstanding gifts: a remarkable flair for the sociology - perhaps one should say politics - of knowledge, and a formidable linguistic proficiency... The story told by Bernal, with many fascinating twists and turns and quite a few entertaining digressions, is... a critical inquiry into a large part of the European imagination... a retrospect of ingenious and often sardonic erudition."

"A work which has much to offer the lay reader, and its multi-disciplinary sweep is refreshing: it is an important contribution to historiography and the sociology of knowledge, written with elegance, wit, and self-awareness... a thrilling journey... his account is as gripping a tale of scholarly detection and discovery as one could hope to find."

"Bernal's material is fascinating, his mind is sharp, and his analyses convince."

"An astonishing work, breathtakingly bold in conception and passionately written... salutary, exciting, and, in its historiographical aspects, convincing."

"Colossal.... Bernal aims to revise current understanding of Ancient Middle Eastern history by taking seriously the ancient Greeks' legends that portrayed much in their civilization as originating in the Middle East, especially Egypt."

"A breathtaking panoply of archaeological artifacts, texts, and myths."

"Challenges the racism implicit in the recent 'cultural literacy' movement."

"[Martin Bernal] has forced scholars to reexamine the roots of Western civilization."

"Demands to be taken seriously... Every page that Bernal writes is educating and enthralling. To agree with all his thesis may be a sign of naivety, but not to have spent time in his company is a sign of nothing at all."

Events may be virtual or in person. Please see details for each event.
END_OF_DOCUMENT_TOKEN_TO_BE_REPLACED