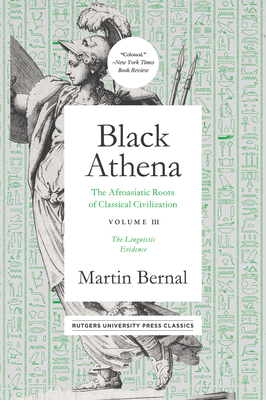 This long-awaited third and final volume of the series is concerned with the linguistic evidence that contradicts the Aryan Model of ancient Greece. Bernal shows how nearly 40 percent of the Greek vocabulary has been plausibly derived from two Afroasiatic languages – Ancient Egyptian and West Semitic. He also reveals how these derivations are not limited to matters of trade, but extended to the sophisticated language of politics, religion, and philosophy. This evidence, according to Bernal, greatly strengthens the hypothesis that in Greece an Indo-European-speaking population was culturally dominated by Ancient Egyptian and West Semitic speakers.

Provocative, passionate, and colossal in scope, this volume caps a thoughtful rewriting of history that has been stirring academic and political controversy since the publication of the first volume.

Martin Bernal’s Black Athena is nothing short of a monumental achievement in scholarship that re-oriented and transformed serious study of ancient civilizations. It remains a soaring accomplishment of classical erudition of the Afroasiatic foundation of Greek history.
— Molefi Kete Asante

"In a spectacular undertaking, Martin Bernal sets out to... restore the credibility of what he calls the Ancient Model of the beginnings of Greek civilizations... Bernal makes an exotic interloper in Classical studies. He comes to them with two outstanding gifts: a remarkable flair for the sociology - perhaps one should say politics - of knowledge, and a formidable linguistic proficiency... The story told by Bernal, with many fascinating twists and turns and quite a few entertaining digressions, is... a critical inquiry into a large part of the European imagination... a retrospect of ingenious and often sardonic erudition."
— Perry Anderson

"A work which has much to offer the lay reader, and its multi-disciplinary sweep is refreshing: it is an important contribution to historiography and the sociology of knowledge, written with elegance, wit, and self-awareness... a thrilling journey... his account is as gripping a tale of scholarly detection and discovery as one could hope to find."
— Margaret Drabble

"Bernal's material is fascinating, his mind is sharp, and his analyses convince."
— Richard Jenkyns

"A formidable work of intellectual history, one that demonstrates that the politics of knowledge is never far from national politics."
— Christian Science Monitor

"His book should be welcome to both classicists and ancient historians, most of whom will, now at least, be inclined to agree with him."
— R. A. McNeal

"Bernal's work and the stir it has occasioned have caused ancient historians and archaeologists to undertake a major reexamination of methods and motives."
— Robert L. Pounder

"Demands to be taken seriously... Every page that Bernal writes is educating and enthralling. To agree with all his thesis may be a sign of naivety, but not to have spent time in his company is a sign of nothing at all."
— Times Literary Supplement

"A serious work that deals in a serious way with many of the principal issues of Aegean history in the second millennium B.C., and one can ask little more of any historical work."
— Stanley M. Burstein, California State University

"[Bernal's] multifaceted assault on academic complacency is an important contribution to the development of a more open, historical, and culturally oriented post-processual archaeology."
— Current Anthropology

"Bernal's enterprise - his attack on the Aryan model and his promotion of a new paradigm - will profoundly mark the next century's perception of the origins of Greek civilization and the role of Ancient Egypt."
— Transition

"[Martin Bernal] has forced scholars to reexamine the roots of Western civilization."
— Newsweek

"Martin Bernal has managed to make the subject of Ancient Greece both popular and controversial."
— Baltimore Sun

"Black Athena is a powerfully written and brilliantly researched book that relentlessly unveils the historical and cultural African origins of Western civilization. Still a must read for all those in search of truth."

“Bernal has ample justification for calling into question many widely accepted hypotheses…. He shows that Egypt and its culture were misrepresented or simply ignored by European writers.”
— Mary Lefkowitz

Events may be virtual or in person. Please see details for each event.
END_OF_DOCUMENT_TOKEN_TO_BE_REPLACED