The Prince And The Puppet Thief (Paperback) 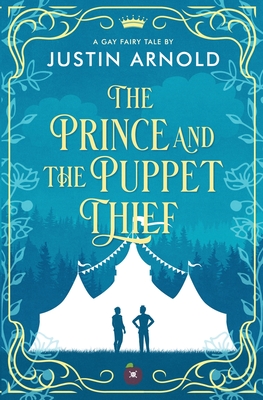 Welcome to the kingdom where princes kiss thieves, princesses dance with their handmaids at midnight, and non-binary magicians see to it that everyone gets their happy-ever-after.

17-year-old Simon The Squirm has spent his life on the run- and he hates it. Breaking the law gives him anxiety, and he always forgets to carry a weapon. Being the son of the 2nd most feared villain in the kingdom has never been easy, but when an ill-conceived plan to steal the Lost Princess's slippers lands him in the dungeon, he makes up his mind to take the first opportunity at freedom.

Prince Marco isn't convinced he's the one to rescue the lost Princess Isobel. Sure, he's a handsome and brave royal straight out of a fairy tale- but that doesn't mean he's ready to fall for the first damsel in distress who sends out an S.O.S. When he finds himself smitten with the sarcastic (if bumbling) Simon, a scheme is hatched to save both of them from a not-so-happily-ever-after.

The mission is simple: Simon must go in Marco's place to rescue the princess and defeat the wicked magician who stole her. But when it becomes clear that the feisty and no-nonsense Princess Isobel would secretly rather be saved by her handmaid, Prince Marco and Simon might just end up rescuing each other instead.

Perfect for fans of The Princess Bride and The School For Good And Evil, The Prince And The Puppet Thief is a hilarious and heartwarming fairy tale rom-com by and for the LGBT community.

All events will be held virtually until further notice.
END_OF_DOCUMENT_TOKEN_TO_BE_REPLACED