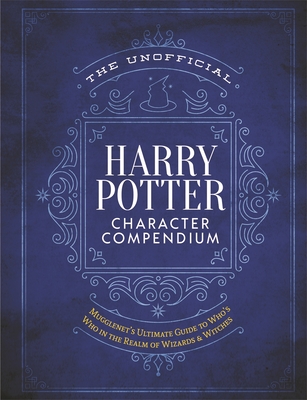 This compendium showcases EVERY character ever mentioned in the Harry Potter books, films and play: the good, the bad and the misunderstood. With more than 700 entries, this book is packed from cover to cover!

J.K. Rowling’s collection of mystical multitudes is what makes the wizarding world so enchanting. To dive into Harry’s story is to immerse yourself in the richness of a magical universe filled with wizarding history, culture and lore. A world of witches, wizards, owls, elves, non- magical people, anti-non-magical-people people, folks who can talk to snakes and snakes who used to be folks. There are mind-readers, shape-shifters, centaurs, giants, ghosts (nearly headless and fully formed) and one enormous, extremely ill- tempered tree.

This massive tome details every character created by J.K. Rowling and appearing in the official Harry Potter canon of books, movies and plays. Each entry highlights one character, where you will find details of when the character was first mentioned, appearance, wizard school, house, patronus, wand, related family members, skills and achievements, personal history and more. The Compendium also include genealogical charts and family trees for the major characters, world maps detailing important locations, homes and schools, as well as charts detailing alliances between characters.

MuggleNet.com, the #1 Wizarding World resource since 1999, is dedicated to honoring the magic of the wizarding world by providing reliable, fun, informative content to our readers. The site is run by Wizarding World aficionados who are passionate about making MuggleNet the best it can be. We pride ourselves on our diverse group of 100+ global volunteers, ranging in age from 15 to 55.

"What an incredible job MuggleNet did on this essential reference work!" - Lev Grossman, NYT bestselling author of The Magicians and Silver Arrow

Events may be virtual or in person. Please see details for each event.
END_OF_DOCUMENT_TOKEN_TO_BE_REPLACED