Sexy Liberal! Of Me I Sing (Paperback) 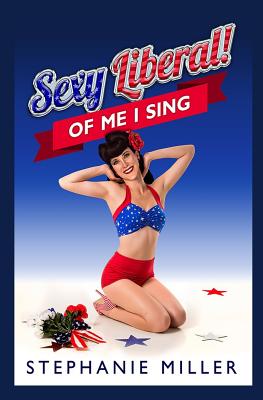 Stephanie Miller's book "Sexy Liberal Of Me I Sing" is a humorous account of the political scene and one that will make you laugh at the wit and insights she provides. You will not be disappointed. "Reading Stephanie's book is like being on the best kind of dinner date. The conversation is smart, funny and politically insightful. And Stephanie's contribution isn't bad either. Seriously, what a fun read. Stephanie, in her wonderfully self-deprecating way, lets you into her brilliant mind, her no BS take on the political scene, and life itself. Enter at your own risk." --Rob Reiner Stephanie Miller is the host of The Stephanie Miller Show which is the #1 liberal talk radio show in the country. With Arbitron ratings cl ocking over 3+ million listeners a week and simulcast daily in 37 million homes on Free Speech TV, where she is also the number one show, her strongest numbers are in the grand prize demographic of highly educated males 25-54, despite, or maybe because of, her status as an out gay woman. It probably explains the sublime effectiveness of her national billboard slogan: "Stephanie Miller ... making men rise in the morning". Stephanie also headlined the country's number one comedy tour, "Stephanie Miller's Sexy Liberal Comedy Tour", as well as the number one comedy album, "Stephanie Miller's Sexy Liberal Comedy Album". "Stephanie Miller is like ice cream for breakfast, or box-wine through a Krazy Straw: pure pleasure that some people say is bad for you, but you know better. Sexy Liberal is deeply, deeply profane, big-hearted, surprising, and it might make you pee your pants a little. Just what you need Read this book. Stephanie Miller for Everything, 2016 " --Rachel Maddow, host of "The Rachel Maddow Show" and author of Drift: The Unmooring of American Military Power "Sexy Liberal is a great book with mind-expanding astuteness and side-splitting humor. Stephanie Miller is so wondrously witty and wise you will want to quote her. But, first, you must read her. Buy this book and help Amazon at last turn a profit." --Lily Tomlin "Sexy Liberal is inspired reading. It is laugh-enhancing and beyond thought-provoking A must read." --Jane Wagner.

All events will be held virtually until further notice.
END_OF_DOCUMENT_TOKEN_TO_BE_REPLACED