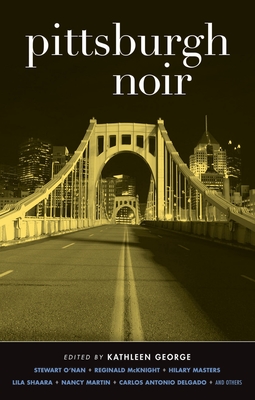 Despite Pittsburgh being labeled the country's most livable city, the fictional citizens populating the 14 high quality stories in Akashic's noir anthology centered on the Steel City have the same dreams, frustrations, passions, and vices as anyone else.
--Publishers Weekly Pittsburgh hasn't inspired many crime novelists to use its haunts for settings in the way that Boston, Baltimore, Seattle and even Cleveland have. Now that's changed with the publication of Pittsburgh Noir, an anthology of short stories by writers who draw on the cityscape to ground their tales.
--Pittsburgh Post Gazette Pittsburgh Noir is] a set of varied and novel approaches to dark fiction that give a taste of a specific place in Pittsburgh, without trying too hard to pander or take advantage of ages-old Pittsburgh media tropes.
--Pittsburgh City Paper Includes brand-new stories by Stewart O'Nan, Hilary Masters, Lila Shaara, Rebecca Drake, Kathleen George, Paul Lee, K. C. Constantine, Nancy Martin, Kathryn Miller Haines, Terrance Hayes, Carlos Delgado, Aubrey Hirsch, Tom Lipinski, and Reginald McKnight. Pittsburgh has recently (and more than once) been called the most livable city in America, yet the old image of smoky skies and steel mills spewing forth grit has never quite disappeared. Its history as a dirty industrial center is a part of its residents, a part of their toughness. The people of the steel city fight. Kathleen George is the Edgar Award-nominated author of the Richard Christie novels set in Pittsburgh. She is a professor of theater arts at the University of Pittsburgh.

Kathleen George is the Edgar nominated author of the Richard Christie novels set in Pittsburgh. Her fifth in the series is Hideout. She is a Professor of Theatre Arts at the University of Pittsburgh.

Events may be virtual or in person. Please see details for each event.
END_OF_DOCUMENT_TOKEN_TO_BE_REPLACED