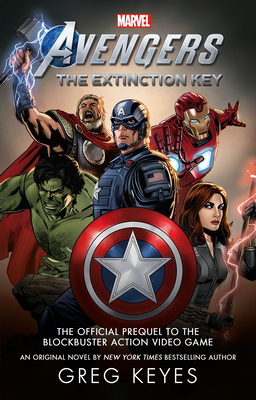 The official prequel to Marvel's Avengers from Marvel, Crystal Dynamics, Eidos Montreal, and Square Enix, with an exclusive adventure that leads into the game itself.

The official prequel to the blockbuster action video game Marvel's Avengers, written by bestselling author Greg Keyes. The game is being developed by Crystal Dynamics, Eidos Montréal, Nixxes, and published by Square Enix. It will be released September 4, 2020 for PlayStation 4, Xbox, Stadia, and PC.

Captain America, Iron Man, Thor, Black Widow, and the Hulk. Earth's Mightiest Heroes have assembled to face world-class threats whenever and wherever they might appear. They are the AVENGERS.

Yet some threats transcend the ages. Centuries ago, a never-before-seen group of heroes gathered as the Avengers of their ancient era to fight the Zodiac, foes who wielded unimaginable arcane energies channeled through a mysterious Key. The resulting battle devastated vast swaths of the planet. The Key was lost and the Zodiac went into hiding, influencing world events from the shadows, waiting for the stars to align to usher in their return.

When strange beings exhibiting the traits of the twelve astrological signs appear in the 21st century, the Avengers again answer the call to assemble. But when this modern team of heroes are forced to divide their efforts, each encounter leads to their opponents gaining strength. Once again, the hunt is on for the Extinction Key...and if the Avengers don't find it, our world will be lost.

Exposed at an early age to cultures and stories of the Native Southwest, New York Times bestselling author Greg Keyes has written novels in some of the top pop culture worlds, including Star Wars, Interstellar, Planet of the Apes, The Elder Scrolls, and Godzilla: King of the Monsters. His acclaimed original fantasy novels include The Waterborn, the Kingdoms of Thorn and Bone tetralogy, and the ground-breaking Age of Unreason series.

All events will be held virtually until further notice.
END_OF_DOCUMENT_TOKEN_TO_BE_REPLACED