The Man Who Wasn't There: A Life of Ernest Hemingway (Hardcover) 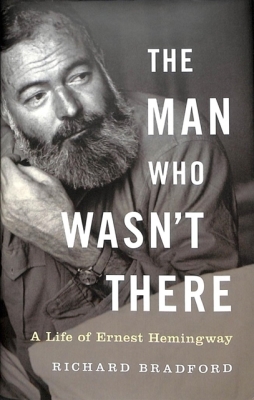 By Richard Bradford
Email or call for price.
Out of Print

Ernest Hemingway was an involuntary chameleon, who would shift seamlessly from a self-cultivated image of hero, aesthetic radical, and existential non-conformist to a figure made up at various points of selfishness, hypocrisy, self-delusion, narcissism and arbitrary vindictiveness. Richard Bradford shows that Hemingway's work is by parts erratic and unique because it was tied into these unpredictable, bizarre features of his personality. Impressionism and subjectivity always play some part in the making of literary works. Some authors try to subdue them while others treat them as the essentials of creativity but they endure as a ubiquitous element of all literature. They are the writer's private signature, their authorial fingerprint. In this ground-breaking and intensely revealing biography, which includes a complete reassessment of Hemingway's oeuvre Hemingway's unfixed personality is shown to be the index to why and how he wrote as he did.

Richard Bradford is Research Professor in English at Ulster University and Visiting Professor at the University of Avignon. He has published over 25 acclaimed books, including a biography of Philip Larkin, which was an Independent Book of the Year, the authorised biography of Alan Sillitoe, a life of Kingsley Amis and a biography of Kingsley's son, Martin. He has been on the longlist for the James Tait Black Memorial Prize, has written for The Spectator and The Sunday Times and has been interviewed on his work for various BBC Radio Arts Programmes, as well as appearing on the Channel 4 Series `Writers in their Own Words', talking mainly on Martin Amis and the post-1960s generation of British novelists. The BBC TV programme `Through the Lens of Larkin', in which he appeared, was inspired by his The Importance of Elsewhere. Philip Larkin's Photographs.

All events will be held virtually until further notice.
END_OF_DOCUMENT_TOKEN_TO_BE_REPLACED