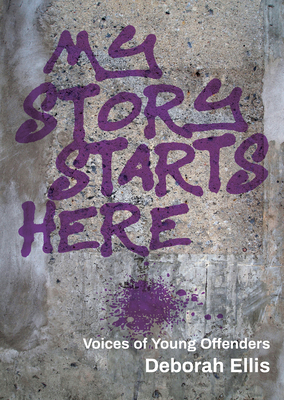 Jamar found refuge in a gang after leaving an abusive home where his mother stole from him. Fred was arrested for assault with a weapon, public intoxication and attacking his mother while on drugs. Jeremy first went to court at age fourteen ("Court gives you the feeling that you can never make up for what you did, that you're just bad forever") but now wears a Native Rights hat to remind him of his strong M tis heritage. Kate, charged with petty theft and assault, finally found a counselor who treated her like a person for the first time.

Many readers will recognize themselves, or someone they know, somewhere in these stories. Being lucky or unlucky after an incident of shoplifting, or the drug search at school, or hanging out with the wrong kids at the wrong time. The encounter with a mean cop, or a good one, that can change the trajectory of a kid's life. Couch-surfing, or being shunted from one foster home to another. The effect of youth crime on families (the book includes the points of view of family members as well as "voices of experience" -- adults looking back at their own experiences as young offenders).

The kids in this book represent a range of socioeconomic backgrounds, genders, sexual orientations and ethnicities. Every story is different, but there are common threads -- loss of parenting, dislocation, poverty, truancy, addiction, discrimination.

Most of all, this book leaves readers asking the most pressing questions of all. Does it make sense to put kids in jail? Can't we do better? Have we forgotten that we were once teens ourselves, feeling powerless to change our lives, confused about who we were and what we wanted, and quick to make a dumb move without a thought for the consequences?

All events will be held virtually until further notice.
END_OF_DOCUMENT_TOKEN_TO_BE_REPLACED