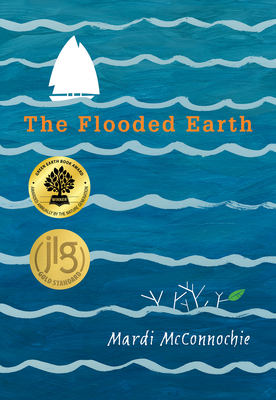 The 2019 Green Earth Award-Winning trilogy opener is now available in trade paperback Forty years after the earth was devastated by massive flooding, four children on one small sailboat must flee corrupt authorities and overcome the dangers of the sea that drowned their world.

Twins Will and Annalie thought the hardest part about this year was going to be their separation when bookish Annalie began life at a prestigious Admiralty-run boarding school and avid sailor Will stayed behind in the flood-damaged slums. But that was before the Admiralty raided their father's engineering workshop. Before they sent a questioner to threaten Annalie at school. Before their father disappeared, leaving a single coded clue to his destination. Desperate to find their father, the twins set out in the family's small sailboat. But though they are both experienced sailors, they have no idea what dangers the sea has in store for them.

With The Flooded Earth, Mardi McConnochie opens her middle-grade cli-fi saga at top speed, drawing readers into a race against pirates, authorities, and the sea itself in a not-so-distant future full of new technology and old human failings.

All events will be held virtually until further notice.
END_OF_DOCUMENT_TOKEN_TO_BE_REPLACED