Where's Zayn: and many others.... Which Direction? (Hardcover) 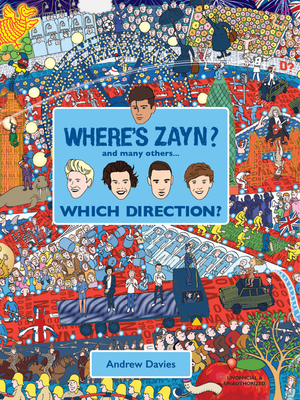 By Andrew Davies
Email or call for price.
Out of Print

With 1D heartthrob Zayn Malik recently leaving the band after a whirlwind five years, and breaking the hearts of millions of fans, the quintessential boy band is still very much in the news. This fun book taps into the worldwide fascination with 1D, where fans not only have to find Zayn but also a cast of thousands. Along the way, the boys find themselves in a variety of situations – on stage, on tour and on film – in countries all around the world!

Full of pop culture references, in jokes and naughty bits, ‘Where’s Zayn?’ is a must for anyone who loves the band, are fans of pop culture or those who just want to have a good laugh.

Andrew Davies is a designer and illustrator of a range of works as diverse as atlases and children’s books.

Andrew, a father of two, conducts drawing and art classes for young people.

He also publishes and illustrates the award-winning Primary Physics text books, and is the author and illustrator of The Big Brain Book (Harper Collins, 1993).

All events will be held virtually until further notice.
END_OF_DOCUMENT_TOKEN_TO_BE_REPLACED