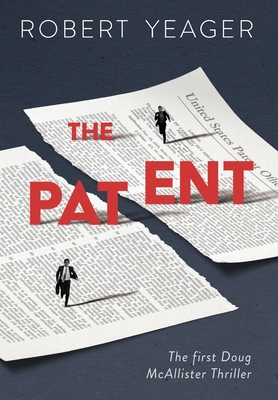 The Patent, a suspense-thriller, opens in post-World War II West Germany. The remaining fanatical Nazis have gone underground, but they continue to pose a threat. Theodore Mayer, a German engineer, files for a patent on a revolutionary method for making steel. After initially refusing to assign the invention to his employer, Difenbach Stahlwerke, Mayer is murdered, and it's made to look accidental. Years later, Doug McAllister, an ex-Navy pilot, now defense counsel in a suit on the patent brought by Difenbach against his Pittsburgh client, will try to discover the facts surrounding the murder and thereby develop a defense in the patent case. As McAllister travels around Europe. he meets an array of characters straight out of Graham Greene's world including a chance, tantalizing encounter with an Aryan version of Grace Kelly who turns out to be Mayer's daughter. The ethical challenge thus posed to McAllister is further complicated by the fact that she also is the fianc of Difenbach's CEO, an ex-Gestapo chieftain. The CIA and the Mossad lend unexpected intrigue that follows McAllister to Brazil. There he risks his life in resurrecting his helicopter flying skills to thwart an airborne assassination attempt on a surprise key witness. The Patent climaxes with a confrontation on a Swiss mountaintop between McAllister (and Mayer's daughter) and the mystery murderer.

Events may be virtual or in person. Please see details for each event.
END_OF_DOCUMENT_TOKEN_TO_BE_REPLACED