A Different Way to Win: Dan Rooney's Story from the Super Bowl to the Rooney Rule (Hardcover) 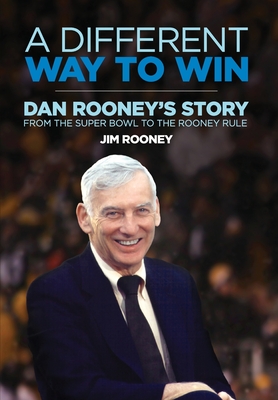 Dan Rooney was one of the most influential sports executives of his generation, the man who transformed the Pittsburgh Steelers into one of the National Football League's great dynasties and premiere franchises. Some of his most important achievements, however, took place off the playing field as he sought to bring about equity in the league's hiring practices and peace in his ancestral homeland of Ireland. As a business leader, a philanthropist, a diplomat and the author of the famous Rooney Rule, Dan Rooney was known for his core values, his quiet strength, his effectiveness, and his willingness to talk to and hear from those who disagreed with him.

In this poignant account of his father's life, Jim Rooney takes readers behind the scenes to share stories from his hundreds of hours of interviews with business and political leaders; sports and celebrity influencers; and family members. Part memoir, part business biography, part history book, A Different Way to Win underscores the importance of focusing on the long game and the effectiveness in building consensus in a way that is meaningful and sustainable for decades to come.

All events will be held virtually until further notice.
END_OF_DOCUMENT_TOKEN_TO_BE_REPLACED