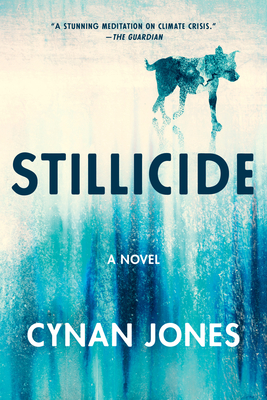 A powerful climate crisis story about love and loss that offers a glimpse of a tangible future in which water is commodified and vulnerable to sabotage that is "close to perfect," "imaginative and far reaching," and "very human and deadly serious" (The Guardian).

Water is commodified. The Water Train that serves the city increasingly at risk of sabotage.

As news breaks that construction of a gigantic Ice Dock will displace more people than first thought, protestors take to the streets and the lives of several individuals begin to interlock. A nurse on the brink of an affair. A boy who follows a stray dog out of the city. A woman who lies dying. And her husband, a marksman: a man forged by his past and fearful of the future, who weighs in his hands the possibility of death against the possibility of life.

From one of the most celebrated writers of his generation, Stillicide is a moving story of love and loss and the will to survive, and a powerful glimpse of the tangible future.

CYNAN JONES was born in 1975 near Aberaeron, Wales where he now lives and works. He is the author of five short novels, The Long Dry, Everything I Found on the Beach, Bird, Blood, Snow, The Dig, and Cove. He has won a Society of Authors Betty Trask Award, a Jerwood Fiction Uncovered Prize, the Wales Book of the Year Fiction Prize, and the BBC National Short Story Award. His short fiction has been widely published in anthologies and publications including Granta and The New Yorker.

"One meaning of 'stillicide' is a continual dripping of water, and the chapters of this novel collect like rainwater to tell the story of a dystopian Britain stricken by drought." —The New Yorker

"This is a great speculative thriller, fast–paced and pulse–raising, that isn’t so far–fetched." —Sarah Neilson, Shondaland

"Stillicide looks directly into the climate crisis by bringing us into a world where water is entirely commodified. Death is everywhere—and so are protesters who refuse to give up. Through multiple perspectives, we’re reminded that protecting the planet is a responsibility that we all share." —Rachel Charlene Lewis, Bitch

"[Stillicide] changes shape as it rises from the page and lingers in your mind: melting, re-forming, resolving itself into something new . . . He’s also brilliant at what writer Benjamin Percy calls 'set pieces,' scenes in which a near-cinematic concentration on detail catalyzes an entire story’s energy." —Amy Weldon, Orion Magazine

"Jones is adept at writing emotionally compelling fiction in snapshots and he’s really refined the skill in Stillicide." —Duncan B. Barlow, Vol. 1 Brooklyn

"Jones' signature, sparse style lends itself well to this apocalyptic slice of life. There are no elaborate plots or extravagant technologies. Rather, nature weaves in and out of these stories in the form of hovering bees, seaweed, and a dampness treasured and elusive . . . Stillicide will linger in its poignancy." —Booklist

All events will be held virtually until further notice.
END_OF_DOCUMENT_TOKEN_TO_BE_REPLACED