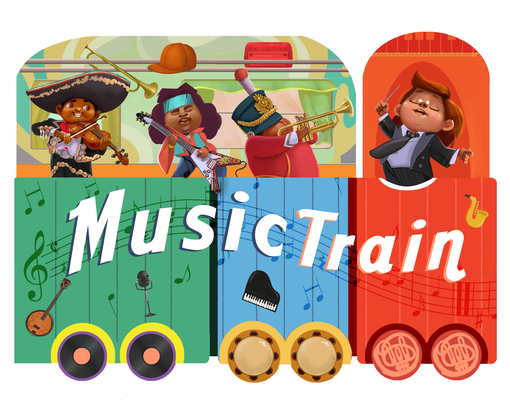 All aboard! This noisy train is leaving the station! Every car on the 56” fold-out train celebrates a different style of music, along with the instruments and styles that make it so unique. Jam with the jazz cats in one train car, break dance with the rappers on another, and belt with the opera soprano on another! With hilarious characters you just might recognize and clever details for young readers to spot, this book-and-toy combination is sure to be a hit with both music lovers and young listeners just finding their tune.

Christopher Robbins is the founder and president of Familius and the cofounder of Hummingbird Digital Media. He is married to his Familius partner and acquisitions editor, Michele Robbins, and they reside in Sanger, California with their nine children.

Susanna Covelli was born in a small town in Piedmont, Italy, earned an MA in architecture, and followed her passion for art and decided to attend a specialization course in both traditional and digital illustration at Scuola Iternazionale di Comics in Turin. Her art expresses her own imagination and inspiration from nature, and she has always been attracted by sinuous shapes, Baroque style, and out-of-the-ordinary perspective

All events will be held virtually until further notice.
END_OF_DOCUMENT_TOKEN_TO_BE_REPLACED