9/12: The Epic Battle of the Ground Zero Responders (Hardcover) 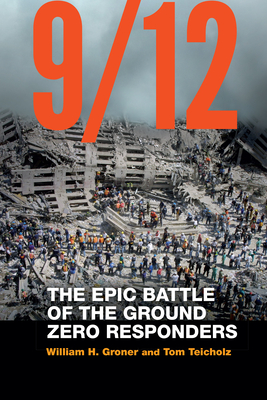 9/12 is the saga of the epic nine-year legal battle waged by William H. Groner against the City of New York and its contractors on behalf of the more than ten thousand first responders who became ill as a result of working on the Ground Zero cleanup. These first responders—like AT&T Disaster Relief head Gary Acker and New York Police Department detectives Candiace Baker, Thomas Ryan, and Mindy Hersh—rushed to Ground Zero and remained to work on the rescue and recovery mission, which lasted for the next nine months. Their selfless bravery and humanity were rewarded with horrible health issues resulting from the toxic stew of chemicals present in the dust and debris that government officials such as Mayor Rudy Giuliani and EPA chief Christine Todd Whitman had assured them was safe. Groner, a lead attorney in the mass tort litigation, fought for their illnesses to be acknowledged and for them to receive validation and closure, as well as for compensation—an eventual aggregate award of more than $800 million.

As detailed in 9/12, the battle for the Ground Zero responders was waged not only in the courtroom but also in the press, in medical and scientific research centers, and among politicians at the local, state, and federal levels, as well as in the halls of Congress to pass the Zadroga Health and Compensation Act. 9/12 weaves together Groner’s firsthand account with glimpses into the first responders’ lives as they try to understand and overcome their illnesses. The result is an intimate look into their battles—physical, mental, and legal—that will leave you cheering for these heroes who, in spite of everything, would do it all again. Told by Groner and journalist Tom Teicholz, 9/12 is the story of the brave public servants who showed up when their country needed them most, of their fight for redress, and of their victory in the face of the seemingly insurmountable.

William H. Groner is founder and CEO of SSAM Alternative Dispute Resolution and co-founder and former managing partner of Worby Groner Edelman, LLP. He lectures on the medical consequences of Ground Zero dust and on Ground Zero litigation.

Tom Teicholz is an award-winning journalist, contributor to Forbes.com, the Los Angeles Review of Books, and Los Angeles Magazine. His books include Ivan of the Extermination Camp, among others.

“9/11 was a tragedy on many levels, but there is something uniquely heartbreaking about the loss of the many first responders who became sick and perished as a result of the environmental catastrophe at Ground Zero. 9/12 expertly tells their harrowing tale.”—Erin Brockovich, consumer advocate and environmental activist

“Many citizens believe the tragedy of 9/11 ended with the attacks themselves. But the two coauthors tell the full story—of the courage and determination of first responders and their numerous allies over the next decade. This is required reading for all Americans interested in the aftermath and legacy of 9/11.”—Kenneth R. Feinberg, special master of the federal 9/11 Victim Compensation Fund of 2001


"Groner and Teicholz write with both clarity and compassion about both the human struggle and the legal struggle. The reward for the reader, no less than for the first responders, is the opportunity to see justice done at long last and against long odds."—Jonathan Kirsch, Jewish Journal

"With the battle over federal health care compensation for 9/11 first responders underway once again, this behind-the-scenes chronicle about earlier struggles provides important information along with profiles in courage and self-sacrifice as readers meet those who gave their all to serve community and country."—Karen Springen, Booklist

All events will be held virtually until further notice.
END_OF_DOCUMENT_TOKEN_TO_BE_REPLACED