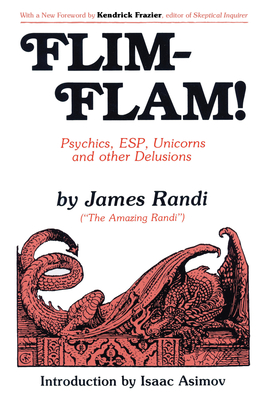 James Randi leaves a towering legacy as an internationally known magician, escape artist, and devoted investigator of the paranormal, occult, and supernatural claims that have captured the thinking of the public for generations. From ESP and psychokinesis, psychic detectives, levitation, psychic surgery, and even UFOs and astrology, Randi dedicated his life to exposing frauds and swindlers. Forty years after the original publication of his landmark book, Flim-Flam remains a classic, with insights that are still relevant today - and perhaps even more so. In this timeless and timely book, Randi famously explores and exposes outrageous deceptions that plague our minds and media. Unafraid to call researchers to account for their failures and impostures, Randi tells us that we have been badly served by scientists who have failed to follow the procedures required by their training and traditions. Mr. Randi provides readers with a compelling and convincing document that will startle and enlighten all who continue to seek out the truth.

James Randi was a Canadian-American stage magician and scientific skeptic best known as a challenger of paranormal claims and pseudoscience. Randi is the founder of the James Randi Educational Foundation (JREF). He began his career as a magician, as "The Amazing Randi," but after retiring at age 60, he began investigating paranormal, occult, and supernatural claims. Although often referred to as a debunker, Randi rejects that title owing to its perceived bias, instead describing himself as an investigator. He has written about the paranormal, skepticism, and the history of magic, and has published many books. He was a frequent guest on The Tonight Show Starring Johnny Carson and was occasionally featured on the television program Penn & Teller: Bullshit!.

All events will be held virtually until further notice.
END_OF_DOCUMENT_TOKEN_TO_BE_REPLACED