How to Wreck a Nice Beach: The Vocoder from World War II to Hip-Hop, The Machine Speaks (Paperback) 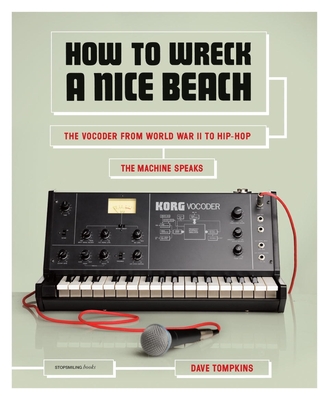 By Dave Tompkins
Email or call for price.
Hard to Find

The history of the vocoder: how popular music hijacked the Pentagon's speech scrambling weapon

The vocoder, invented by Bell Labs in 1928, once guarded phones from eavesdroppers during World War II; by the Vietnam War, it was repurposed as a voice-altering tool for musicians, and is now the ubiquitous voice of popular music.

In How to Wreck a Nice Beach—from a mis-hearing of the vocoder-rendered phrase “how to recognize speech”—music journalist Dave Tompkins traces the history of electronic voices from Nazi research labs to Stalin’s gulags, from the 1939 World’s Fair to Hiroshima, from artificial larynges to Auto-Tune.

We see the vocoder brush up against FDR, JFK, Stanley Kubrick, Stevie Wonder, Neil Young, Kraftwerk, the Cylons, Henry Kissinger, and Winston Churchill, who boomed, when vocoderized on V-E Day, “We must go off!” And now vocoder technology is a cell phone standard, allowing a digital replica of your voice to sound human.

From T-Mobile to T-Pain, How to Wreck a Nice Beach is a riveting saga of technology and culture, illuminating the work of some of music’s most provocative innovators.

Dave Tompkins, a former columnist for The Wire, writes frequently on about hip-hop and popular music. His work has appeared in Vibe, The Village Voice, Wax Poetics, and The Believer. Nearly a decade in the making, this is his first book.

"Dave Tompkins is seven steps ahead of science and several leagues outside of time."
—Sasha Frere-Jones, Pop Music Critic, The New Yorker

"One of the most bugged, brilliant guys I know."
—Oliver Wang, NPR music critic

“How to Wreck a Nice Beach is much more than a labor of love: It’s an intergalactic vision quest fueled by several thousand gallons of high-octane spiritual-intellectual lust. Outside of, say, William Vollmann, it’s hard to think of an author so ravished by his subject... A hallucinatory stew of Rimbaud, Tom Wolfe, Lester Bangs, and Bootsy Collins.”
—New York

"This one has cult audience written all over it."
—Booklist

All events will be held virtually until further notice.
END_OF_DOCUMENT_TOKEN_TO_BE_REPLACED